"Beguiling the Beauty," by Sherry Thomas 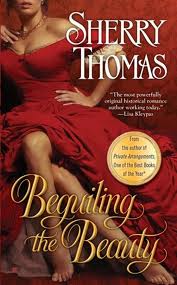 The Chick: Venetia Fitzhugh. When the arrogant Duke of Lexington condemns her as a scheming beauty during a university lecture, she decides to seduce him in disguise in order to prove him a hypocrite.
The Rub: She's in for a dilemma once she falls in love with him - will he still love her and be able to see beyond her staggering beauty once he knows who she really is?
Dream Casting: Kate Winslet.

The Dude: Christian de Montfort, the Duke of Lexington. The first time he sees Venetia Fitzhugh, he falls in love with her beauty, only to hate himself for it once he apparently learns he true character.
The Rub: While he comes to love his anonymous baroness lover aboard the ship Rhodesia, he can't quite shake his obsession with Venetia.
Dream Casting: Christian Bale.

Mr. Townsend: Too bad she's a terrible wife! Remember me as a flawless, faithful, totally trustworthy husband.... *kills himself*

Venetia: *LE GASP!* Wow, what a prick! I shall revenge myself by seducing you!

Christian: *researches* She was Venetia the whole time? Wow, what a gold-digging tart!

Venetia: I love you, you moron.

Christian: Wow, I am a moron. Let's be happy together!

The Word: Oh, Sherry Thomas. You're like Mary Balogh. I will never not like your books (except that first one which I did like, I just didn't connect with, but it's one I should probably reread now). And I did enjoy this book, even though the hero is kind of an asshole.

Venetia Fitzhugh is hot. I mean super hot. Spontaneous-marriage-proposals-from-strangers hot. Our 19-year-old hero, Christian, the Duke of Lexington, takes one look at her during a cricket match and is immediately obsessed with her. Unfortunately, his infatuation is thwarted by the fact that she is married. A few years later, he runs into her distraught husband Mr. Townsend in a club. Mr. Townsend confides in Christian how his marriage to Venetia has ruined him, and he kills himself shortly thereafter.

As Mr. Townsend's enormous debts to jewellers come to light, Christian, in probably one of the most epic cases of Sour Grapes ever, convinces himself that Venetia Fitzhugh is a greedy, callous gold-digger who uses her beauty to snare men. When she marries an incredibly wealthy older man when her mourning period is scarcely over, this only cements her tawdry whorishness in Christian's mind.

But he's still obsessed with her. And this makes him hate her even more - even though he's never even spoken to her in person.

Venetia, with two unfulfilling marriages under her belt and a comfortable income, has no idea who the Duke of Lexington is until she sees a flyer for a lecture he's giving at Harvard University. Venetia and her sister-in-law Millie are in the United States in order to keep Venetia's sister Helena occupied and supervised. Helena, it appears, has been carrying on an affair with a married man and her family hopes to keep scandal at bay by keeping her an ocean away from her lover and throwing other eligible men in her path. Eligible men like the Duke of Lexington, an influential scientist (I quite enjoy how many of Sherry Thomas' heroes are scientists and mathematicians).

But what will happen when the ship lands in Britain?

Okay, so as you can probably tell, I wasn't a huge fan of Christian at the beginning. However, the ultimate hypocrisy of his beliefs (his anger at women relying on their beauty leading him to think the very worst of Venetia because of hers) is not lost on the reader or on the heroine. He's still a fascinating character and the progression of his relationship with Venetia is intriguingly layered. Sherry Thomas's clever writing turns the cliche of love at first sight on its head. It's clear that Christian's initial obsession with Venetia is just that - obsession. One-sided, narrow-minded and ultimately selfish, it has everything to do with Christian's sexual gratification (or lack thereof) and nothing at all to do with Venetia's thoughts, interests, or feelings. Christian's obsession with Venetia and his love for the Baroness (her alias) are two different things that Christian has to reconcile with as the story progresses.

That being said, I rather wish Venetia had been a bit stronger of a heroine. I appreciated how she defended herself, how unselfconscious she was of her looks, how confident she was in her own character, and how she refused to kowtow to Christian's opinion of her. At the same time, however, once she falls in love with Christian she becomes rather meek and cowardly, terrified of losing his esteem once she's obtained it. She comes into her own at the end, but it's a little sudden.

Barring that, with the use of thoughtful themes on beauty and obsession, some excellent writing, period detail, and secondary characters, Beguiling the Beauty is a solidly enjoyable read.
A-
Posted by AnimeJune at Sunday, November 25, 2012