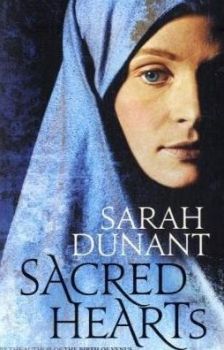 Suora Zuana: The dispensary mistress whose unique upbringing by a doctor left her with significant medical and herbal training as well as a burning scientific curiosity. Sometimes, however, she fears her scientific mind keeps her from truly getting in touch with God.

Suora Serafina: A teenage girl forced into the convent against her will for having an affair with her music instructor. Despite her furious desire to escape, she and Suora Zuana develop a reluctant friendship.

Madonna Chiara: The Abbess of the convent of Santa Caterina. While she and Suora Zuana share a personal friendship, she cannot show favouritism while keeping a close watch on the political currents that might bring unwelcome reform to convent life.

Suora Umiliana: The novice mistress. Exceedingly devout, she believes in reform and wants to bring a more rigid way of life to the convent - as well as a change in leadership.

Suora Magdalena: An extremely pious and elderly sister kept in seclusion who purportedly experiences stigmata and religious ecstasies. Her presence signifies the conflict between Madonna Chiara and Suora Umiliana: the Abbess keeps her in isolation in order to keep unwanted attention away from the convent, but Suora Umiliana wants to proclaim the presence of this "living saint" to bring change to the convent's way of life.

The Word: The story takes place entirely within the convent of Santa Caterina, settled within the Italian city of Ferrara in the 16th century, while religious reform is running rampant throughout Europe. It's a period of history in which dowry prices are so high most families can't afford to marry off more than one daughter - except to Christ, that is.

Suora Zuana has spent sixteen years in the convent, ever since her physician father died, leaving her with his books and his knowledge but no family to take her in. Now working as the convent's dispensary mistress, she is responsible for developing remedies, practising medicine, and studying her father's craft. While she sometimes finds convent life restricting, she also appreciates that she would never be able to pursue her scientific curiosity anywhere else in the outside world.

Her remedies come in handy when the convent acquires a new novice - the 16-year-old Suora Serafina, who comes with a dowry as wealthy as her heart is unwilling. Furious and despairing at being torn from her privileged life and forced to take the veil after her romance with her music teacher was discovered, Suora Serafina feels convent life is akin to being buried alive. When her wild howling threatens to keep the entire convent awake, Zuana gives her a potent sleeping draught. To reward Suora Zuana for her quick thinking, the abbess, Madonna Chiara, orders Serafina to assist Suora Zuana in the dispensary. There, the two women end up forming a delicate friendship.

But not everyone is calm and content with convent living. In the outside world, as a result of Protestant accusations of lechery and corruption within monasteries and convents, the Council of Trent has declared that nunneries should be reformed - by separating them even more fully from the outside world. Musical instruments other than the organ would be removed, the style of musical compositions would be severely restricted, convent-performed theatricals would be banned, and bars and grilles and bricks would be applied to convent windows to prevent moral "contamination."

Suora Zuana knows that such changes would make life unbearable for the nuns of Santa Caterina, many of whom have, like Suora Zuana, discovered their secondary vocations as passionate musicians, playwrights, and craftswomen within the autonomy of the convent. While the abbess' political connections and their current arrangement with the local bishop help to shield Santa Caterina from the Papal inspectors, any undue scandal within its walls could draw the wrathful eye of the reformers to their doorstep.

However, as Suora Zuana builds a friendship with the deeply troubled Suora Serafina - a girl who refuses to accept her fate as a nun and continually develops plans to escape - Zuana comes to wonder whether the maintenance of the convent's peace is worth the squashing of one girl's sanity and future.

As a practising Catholic, I took a lot away from this book, in the spiritual sense as well as the literary sense. I really appreciated the attention to detail and the exploration of every nun's personal search for God, and the way convent life was designed to open the spirit and bring people closer towards an intimate relationship with Christ. Even Suora Umiliana, who is essentially the antagonist, is far from a hypocrite in her beliefs and is sincere in her motivations for reforming the convent.

The characters are all splendidly realized and fleshed-out. I enjoyed reading how the scientific Zuana - herself an unwilling novice - came to sympathize with Serafina, while at the same time understanding how Serafina's actions could negatively impact the whole convent. These characters undergo significant struggle, both externally and with their own belief systems and goals. While the ending seemed a little bit easy, at the same time, half the story is the description of convent life and the intricate relationships of the women within. In many ways, the plot itself is rather simple and almost a secondary aspect of the novel.

That being said, this is a richly detailed and spiritual historical novel about a fascinating way of life in the 16th century - a way of life that allowed female autonomy and artistic expression in a period when few other institutions did. Definitely worth checking out.
A

You can purchase Sacred Hearts here.