"When the Duke Returns," by Eloisa James 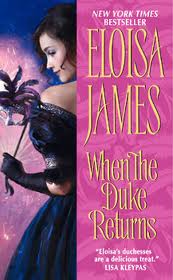 The Chick: Lady Isidore Del'Fino, a.k.a. Duchess of Cosway. She's been married 11 years - to a husband she's never seen. She hopes by attending an infamous houseparty that she'll be able to scare him back to England.
The Rub: Her gallivanting explorer husband wants a annulment. After knowing her for all of a day. That'll sting the ego.
Dream Casting: A younger Morena Baccarin.

The Dude: Simeon Jermyn, Duke of Cosway. Having returned from exploring the middle and far East, he discovers his wife is not the prim maid his mother described, but a darkly sensual hoyden.
The Rub: After a decade spent learning how to suppress his animal desires, he feels them all for his wife, Isidore. But decides to name a saint aboutr her, even it means more press.
Dream Casting: Eric Bana.

Simeon: Hey, I'm here at this houseparty to take you home...

Simeon: But feel free to visit me on my estate...

Simeon: ...that smells like poop because the toilets are backed up.

Simeon's Mum: Hello, I'm this novel's Token Parent, here to be Intolerable for No Reason other than to Explain the Hero's Shortcomings.

Isidore: Well it looks like we're getting along and finally starting a relationship ...

Isidore: ...except I want a man who loves me AND likes me, and better clothes. See? TWO people can use ellipses.

Simeon: I'm sorry - how about I rescue you from pirates?


The Word: In this fourth book in Eloisa James' Desperate Duchesses series, Isidore and Simeon were married by proxy when Isidore was twelve. For the last twelve years, Simeon gadded about the world living as an explorer and an adventurer, while Isidore got older, hotter, and bored...er.

Finally, in the events of Duchess by Night, Isidore travelled with her friend Harriet to the houseparty of the infamous Lord Strange, hoping to scandalize her husband enough to get him to come home and make their marriage a real one. The good news - her plan works. At the behest of his horrified mother, Simeon finally travels back to England to set eyes on his wife for the first time.

The bad news? After only a few days' acquaintance, he decides he'd rather annul the marriage. Simeon, being the benign type of selfish ass particular to Eloisa James novels, believes that true manliness is achieved by shirking one's family and responsibilities to fart around the Orient keeping oneself emotionally repressed. Back in England, he takes one look at his super hot Italian wife and immediately knows that maintaining the art of the Middle Way around her would be impossible. He's honed his mind so finely, that he's even managed to remain a virgin.

His weird idiosyncrasies can be attributed to (again, in typical Eloisa James fashion) his flamboyantly horrible mother, who has turned his estate into a festering, foul-smelling stye in his absence. Hundreds of unpaid bills litter the place, the building is falling to pieces, his baby brother Godfrey was pulled out of Eton due to their mother's unwillingness to pay the tuition, the cheated townspeople hate him, and every water closet on the property has backed up, lending a particular perfume to the place on damp days.

So really, Simeon doesn't need the extra stress and he lets Isidore know that she's "off the hook." But Isidore will not be put aside so easily. She had to wait 11 years in limbo because Simeon needed to "find himself," so she's determined to get those years back with interest by seducing Simeon and taking "annulment due to nonconsummation" off the table.

Now, it sounds like a cute premise, and Eloisa James can certainly sell it. She's a master of clever dialogue, setting and description. Her books may not always make sense, or even be very good, but they are always entertaining on one level or another. However, at her worst her books can be all fluff and no substance - very pretty, well-described, sumptuous fluff, but once the sparkle wears off one realizes the story didn't make sense and the hero was kind of a jerk and the ending was far too easy.

First of all, once again, I felt like Jemma/Elijah/Villiers' story took up way too much time. I'm not talking a few scenes here and there - I felt like they had half the book, leaving only the other half for the novel's actual protagonists. Listen, Sherry Thomas managed to convey a years-spanning Reunited Marrieds story in one book, so I'm less convinced these days that Eloisa James needed five (!) to do hers justice. Don't get me wrong, there's nothing wrong with buildup and I am looking forward to Jemma and Elijah's book, but I felt their presence in this novel was very intrusive and sapped energy away from the other couple.

And man did they need it. I quite liked Isidore - she was hot-tempered and forthright without being obnoxious, and was refreshingly free of self consciousness. However, I had several problems with Simeon. Mainly, he's an astonishingly selfish and patronizing asshole. Eloisa James is quite adept at giving us thoughtless jerkoff heroes who grow to realize people other than themselves exist, but I never really got the sense that Simeon truly realized how much he'd limited Isidore's choices by staying away.  And once he does come to his senses and declares his love, Isidore has an out-of-the-blue whiplash moment of doubt and flees into the Novel's Black Moment, a development that made little sense.

Secondly, so many of the novel's plot points seem contrived. Simeon comes home to find his estate in shambles and his tenants impoverished and resentful because his father and mother, for inexplicable reasons, up and decided to stop paying bills. The mystery around this added a layer of tension and suspense to the first half of the novel. As Simeon confirms, the estate was never in any financial danger and there was always plenty of money - so what made them stop paying their creditors and tradesmen? In the end, it's written off as "Your father was just insane" - and no further explanation. Narratively, it was a frustrating let down and contributed nothing to the overall theme of the story. It was just a cheap way to place extra tension on the hero.

That, in a nutshell, is why this wasn't a perfect novel. The characters are witty and charming and entertaining, but the story never really examines beyond their witty charm, or at least very deeply.This makes When the Duke Returns a bubbly, fun novel to read - but a harder one to remember.
B

You can purchase When The Duke Returns here.