"The Virgin Cure," by Ami McKay 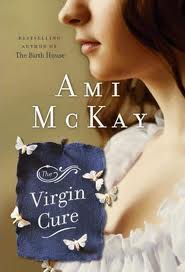 The Protagonist: Moth "Ada" Fenwick. Born in the slums of New York City, she longs for a life of luxury, ease, and comfort. But how far is she willing to go to achieve that? When she's 12-years-old?

Dr. Sadie: A female physician who treats the members of Miss Everett's brothel, but once Moth arrives, she fears she is enabling the lifestyle more than protecting the victims of it.

Mae: A young courtesan-in-training who recruits Moth into the service of Miss Everett's brothel. While ostensibly in Miss Everett's employ, she's not averse to making a little something on the side.

Alice: A naive fellow courtesan-trainee who befriends Moth, even as Moth worries about Alice's dreams of finding true love and marriage in the service of a brothel.

Cadet: The young man-of-all-work for Miss Everett's brothel - both Alice and Moth have crushes on him.

Mrs. Wentworth: Moth's first employer, to whom she's sold as a ladies' maid by her mother. Kept a virtual prisoner in her own home for "embarrassing" her husband, she has since gone insane and cruelly abuses Moth.

Mr. Wentworth: Mrs. Wentworth's absent husband, whom Moth runs into at the brothel. While she initially sees this as an opportunity to revenge herself upon his hateful wife, her schemes go predictably awry.

Mr. Dink: The kindly owner of a carnival sideshow who offers Moth part-time employment as a display girl while she's training at Miss Everett's.

The Word: This was a book I had originally decided I wasn't going to review - why? Because I really didn't know how to. The Virgin Cure is a superficially entertaining novel with some interesting period detail and lovely writing, but little to no plot structure. Even by the end of the novel, I couldn't figure out what the book was trying to say.

I picked this one up primarily because I really enjoyed McKay's debut, The Birth House, when I read it in university. The Birth House was a deft novel exploring gender roles and the importance of childbirth  in early 20th century Newfoundland when a male obstetrician declares war against the local midwives.

I was expecting similarly awesome feminist themes in The Virgin Cure, especially since the author reveals she based one of the characters, Dr. Sadie, on her own great-great-grandmother.

Our main character is Moth, the 12-year-old daughter of a Gypsy fortuneteller who lives in the slums of New York City in the 1870s. She and her mother live in abject poverty, which leads Moth to decide that she will do anything it takes to garner a life that has a featherbed, a roaring fire in the grate, and two pug dogs at her feet. As the narrative indicates, slum-child Moth is no innocent to the ways in which women are used and abused, so her willingness to do "anything it takes" has a larger scope than one initially thinks.

Before she can properly formulate any plans to run away to make this fortune, her mother abruptly sells her into the service of a wealthy recluse named Mrs. Wentworth. Her mother's choice doesn't seem entirely cruel: as a lady's maid, Moth will have decent food and shelter as well as regular wages. Unfortunately, Mrs. Wentworth is also completely insane and monstrously abusive. When Mrs. Wentworth's punishments culminate in coming after Moth with a pair of shears, Moth escapes with the help of the butler and a stolen piece of Mrs. Wentworth's jewellery.

Unfortunately, she arrives back at her old house to find that her mother has already left for parts unknown, leaving Moth to fend for herself. After spending some time begging and (unsuccessfully) thieving, she is eventually befriended by a pretty, well-dressed girl named Mae, a recruiter for Miss Everett's Infant School, an exclusive, high-class brothel. Moth sees this as her ticket to obtaining that feather-bed-and-pug-dog life she's always wanted, even though her misgivings grow as her training proceeds.

The Virgin Cure serves as an examination of the types of employment women took to survive by themselves in the 1870s. Through Moth's eyes, we see women as fortunetellers, beggars, shoplifters, bakery assistants, hot corn girls, maids, cooks, prostitutes, courtesans, and sideshow acts, with Dr. Sadie standing at the very apex as a successful woman doctor, and she is still shunned by high society and her wealthy family for her choice of profession.

While the period detail and the examination of courtesan life is fascinating and highly entertaining, the novel really has no plot other than Moth's eventual realization that, hey, prostitution is a pretty nasty business, maybe I should earn my living elsewhere. After that Captain Obvious Epiphany, the ending is a disappointing cop-out that conveniently does away with the usual consequences that would follow Moth's actions, leading to some inexplicable and contrived developments that serve to give Moth a picture-perfect happy ending that makes absolutely no sense.

It also muddles the general themes. McKay perhaps does too good a job describing the grinding despair of slum life and the hopeless state of female employment versus the risky-but-regulated luxury of courtesan life, so Moth's eventual decision to reject prostitution seemed unrealistic. McKay spends most of the book describing how these women had to get these sorts of jobs because they didn't have any other choices, because society didn't give them any other options, because the alternative to working was starvation and death. In the scenes where Dr. Sadie tries to talk Moth out of prostitution, even Dr. Sadie has to acknowledge that the other options available to Moth (workhouses, charity boarding houses) cannot compare to what the brothel offers.

Moth actually choosing the possible eventuality of starvation and death over prostitution seemed a curiously old-fashioned idea, the idea that death is preferable to the loss of physical innocence. And the novel cops out of even that  - she miraculously obtains outrageously successful non-whorish employment afterwards as the inconceivable cherry on top of the Implausible Sundae. Moth is depicted as morally superior to the girls who choose to make their living as courtesans - but that message is undermined by the fact that Moth, thanks to the Magic of Plot Contrivance, has an Honest and Unrealistically Lucrative Job waiting in the wings for her.

Those other girls at Miss Everett's, or the hot corn girls, or the professional housebreakers or the put-upon maids, none of them have the option to join Mr. Dink's travelling circus (for reals) - so why are they seen as Less Special than Moth? Again, the ending of this novel seemed incredibly old-fashioned - old-fashioned in the literary sense, following the tradition of 19th century novels where the heroine who chooses Pious Poverty over Sinful Luxury has her virtue rewarded by the narrative with a miraculous job, or a lost-lost relative come to claim her, or a forgotten fortune to keep her in non-slutty linens for the rest of her days.

The surprising appearance of such fairy-tale morals in an otherwise soberly realistic novel surprised me, and weakened the novel's ultimate impact.
C

You can purchase The Virgin Cure (not THAT way, you pervs!) here.

Posted by AnimeJune at Thursday, November 29, 2012