"A Matter of Class," by Mary Balogh 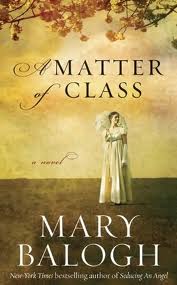 The Chick: Lady Annabelle Ashton. When her parents tried to wed her to a wealthy, but ugly marquis, she ran off with a coachman.
The Rub: Unfortunately, she didn't get far, and now she's ruined and her family is bankrupt. The only one willing to marry her now is her lower-class neighbour Reginald Mason.
Dream Casting: Romola Garai.

The Dude: Reginald Mason. When his extravagant ways play on his father's last nerve, he's ordered to marry an Earl's ruined daughter or be cut off from his inheritance.
The Rub: His family's merchant class - and his fiancee's family's as blue blooded as they come. Getting his future father-in-law's approval seems just about impossible.
Dream Casting: Charlie Cox.

Reginald: Darn, I spent too much money so now I have to get married.

Their Parents: WE ARE INCREDIBLY DISAPPOINTED WITH BOTH OF YOU ... we just don't feel like expressing that in an interesting way. Let's just all be nice to each other for the next hundred or so pages.

Annabelle and Reginald: Cool. Let's have an adorably bland flashback.

Baby Annabelle and Reginald: Hey. We have opposite genitalia and our parents hate each other. Let's have sex in a field!

Annabelle and Reginald: Cool, we totally lied to everyone and faked having personalities so that we could trick people into letting us get married! Surprise! WE HAVE NO PERSONALITIES! HOORAY!

The Word: **spoiler warning - there is a "twist" at the end of the novel, and I plan to spoil the hell out of it because it is stupid. You have been warned.**
I knew it had to come eventually. Every author is going to have at least one dud book. Heck, even Laura Kinsale had Seize the Fire.

And while Mary Balogh has had more "Good" than "Great" books with me, her books have always been so consistently Good With a Capital G that I've always loved reading her. I knew I could trust her to bring an excellent story and some nice drama to the table with whichever book she presented me.

Except for this one.

A Matter of Class angered me for several reasons - 1) while I appreciate the narrative risk Balogh took, the twist at the end is ridiculous as hell and ultimately compromises the entire book, 2) I bought this book in hardcover. HARDCOVER. FOR A NOVELLA. I expect quality when I buy hardcovers!

Of course, at the beginning, everything looks interesting. Our hero, Reginald, is a Feckless Spendthrift who fills his closet with expensive boots at the same time he empties his father's metaphorical closet of Paternal Patience.

Meanwhile, our heroine, Annabelle, is an Impulsive Eloper who dashed off with her handsome coachman to escape an arranged marriage to an Ugly Bald Marquis, but was caught at an inn when her servant-class beau jumped out a window. She has since destroyed all chances of marrying any marquises, bald or not, and her Earl father's estate is swimming in debt.

However, when Reginald's father hears about Annabelle's plight, a lightbulb goes off in his head - or else the coal-powered Regency equivalent of a lightbulb. With Annabelle ruined and the estate bankrupted, the Earl can't exactly be choosy with regards to her suitors, so Reginald finds himself ordered by his father to propose to and marry Annabelle - or else be cut off without a penny.

Annabelle's father, the Earl, is appalled at the notion of giving his daughter to a commoner to pay for his mistakes, but he doesn't exactly have many options besides putting a bell around Annabelle's neck to keep her from traipsing off with the first handsome wage slave she encounters.

So, despite nearly everyone Secretly Hating the Idea, Reginald and Annabelle find themselves engaged to be married.

Now, all of this sounds interesting doesn't it? It certainly seems as if there are endless opportunities for drama, misery, misunderstandings, acrimony, prejudice, and humour, doesn't it?

Oh, but how Mary Balogh loves fooling with people's expectations!

This novella was as dull as ditchwater, except for when it was Stupidly Ridiculous Beyond All Reason.

First of all, there's no real conflict. Reginald's father is so happy at the prospect of gaining a family connection to the aristocracy that he promptly turns in his Antagonist Card, while Annabelle's father spends his time whining and sitting alone in a corner. Meanwhile, the novel wastes unnecessarily large amounts of words insisting that the protagonists' parents Are Really Good People At Heart despite that one time they tried forcing their kids into marriage to serve their own ambitions. Oh, yeah, and the twenty years they spent actively hating each other.

Second of all, our protagonists, despite their gaudy Eloper and Spendthrift costumes, are bland and colourless underneath. They spend most of their time together exchanging a few weak barbs with the predictability and false liveliness of two cuckoo clocks fighting to announce the hour first. The novel tells us at the start just how Feckless and Impulsive they are - but none of this is shown in their actions or behaviour. Nothing is explored about their impulses, passions, and motivations - you know, who they are as actual people.

Thirdly, instead of actually developing the protagonists, we get treacly, intrusive and utterly useless flashbacks to the extremely infrequent times they met as children and teenagers. You know, to show us how empty and predictable and cliched they were then, too.

By the eighty-percent mark of this novella, nothing was making sense. The protagonists' families 20-year feud ended five minutes after tea. Our Spendthrift wasn't thinking about spending and our Eloper wasn't thinking about Eloping. Our flashbacks showed that, despite their extremely infrequent meetings, our protagonists fell in Sweet Savage Love with each other at the age of twelve and fifteen. So what happened?

And that's when we get "The Twist" that turns this story from boring to flat-out nonsensical.

After a hundred supremely boring pages, our hero and heroine get married - and then reveal (tee-hee!) that they miraculously engineered this whole situation in order to overcome their class differences and their parents' disapproval to get married.

Because just running off to Gretna Green is apparently TOO DIFFICULT FOR THESE PEOPLE.

I don't even know where to start with how monumentally dumb this "twist" was. First of all - it's a complete character cop-out. Neither of our protagonists are developed at all beyond their initial markers of That Chick who Eloped and That Dude Who Really Likes Designer Boots. Take away those basic characteristics, and who the hell are these people? I have no idea. There is nothing definite or memorable about either of them.

Well, no, that's not true - we do learn something about their characters. We learn they're the kind of people who are willing to defraud, publicly humiliate, emotionally manipulate, and exploit the financial hardships of their own parents for personal gain. Annabelle permanently ruins herself in the eyes of society and makes her father a public laughingstock to be with Reggie.

Because, somehow, carefully choreographing a fake elopement with an actor is easier than performing a real elopement with the person you actually want to marry.

Yeah, didn't make sense to me, either.
D


You can purchase A Matter of Class here, but don't say I didn't warn you.