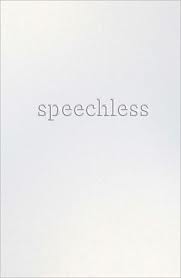 The Protagonist: Chelsea Knot. Chelsea will do, and more importantly, say anything to stay in her popular best friend's good graces. So when she discovers a schoolmate is secretly gay, she rushes off the share the details with her - and accidentally informs the whole basketball team, too.
The Rub: When that gay classmate winds up in a coma, Chelsea becomes an outcast when she comes forward. Learning the hard way how powerful speech can be, she takes a vow of silence.

Asha: A sweet-natured social outcast who befriends Chelsea after her vow of silence. Loving knitting and working at the local diner.

Sam: The best friend of Noah (the gay bashing victim), he's paired with Chelsea in art class, and the two bond over their mutual friendship with Asha.

Noah: A classmate of Chelsea's, whom she outs after she catches him making out with Andy. Is attacked and hospitalized by two basketball players.

Kristin: Chelsea's former best friend and the most popular girl in school - she is a ruthless, conniving, and, yes, stereotypical Queen Bitch who makes Chelsea Public Enemy #1 after she rats out Kristin's boyfriend to the cops.

Lowell: A thuggish basketball player who starts bullying and harassing Chelsea for ratting out his teammates.

The Word: This was an interesting novel to read because although I really didn't like the writing style, um, at all, the story was interesting enough to keep me absolutely addicted to it.

Chelsea Knot is living the high life as the best friend/minion/personal Gretchen Wieners of Kristin, Grand Lake High School's vicious Queen Bee. Sure, she always has to play second fiddle and cater to Kristin's exacting moods and personal style, but the ensuing popularity is all she's ever wanted. Chelsea is incapable of keeping a secret and is one of the biggest gossipmongers at school, a trait she maintains because it entertains Kristin and keeps her in the popular girl's inner circle.

When Chelsea drunkenly walks in on a male classmate, Noah, making out with another boy during a party, she stumbles off to share the scandalous details with Kristin - and blurts out the deets in front of half the basketball team as well. That very night, two basketball players attack Noah and put him in a coma, and for the very first time, Kristin demands Chelsea keep her mouth shut.

But Chelsea is horrified at what she's done, and makes the hardest (and ultimately best) decision of her life: she goes to the cops with her story, resulting in the arrest of her school's star basketball players - one of whom is Kristin's boyfriend. She then makes the second hardest decision of her life: to take a vow of silence to atone for her formerly loose lips.

Chelsea becomes a pariah overnight - half the school despises her as the traitor rat who crippled the basketball team, the other half are eager to kick the Queen Bee's sidekick now that she's down, and her teachers have no idea what to do with a student who refuses to speak. The only people who reach out to Chelsea are the people she least expected - the quirky, unconventional social outcasts who knew Noah personally.

There were a lot of things I didn't like about this book. The voice, for one. The writing style is juvenile and simplistic in a cliched way - it doesn't come across as immature because it's the voice of a teenager, but because it sounds like an adult trying too hard to imitate the voice of a teenager. I also thought the villains' comeuppance at the end was disappointingly lame considering the huge amount of build-up the story bestows upon Chelsea's "brilliant" revenge scheme. As well, I was kind of annoyed by how little "screen time" both gay characters in the book received. The Inciting Incident of the novel is a gay bashing - but it's used to illustrate the story of a sad, straight, privileged, white girl while the actual victim is only present for ten pages or so. However, one could also make the exact same argument about Lauren Myracle's Shine, and that book rocked my socks like a laundry machine hurricane.

But what did this novel do well? Despite the clunky writing and the disappointing payoff, the character development is amazing. I loved reading about Chelsea's progression towards being an independent person. I loved how her voicelessness helped develop her self-awareness, especially regarding her friendship with Kristin and her own personal value. Chelsea starts the book as a stereotypical Popular Girl - obsessed with clothing, gossip and boys and terrible at schoolwork. Once Kristin destroys their friendship and Chelsea starts to make friends who don't require that she constantly praise and entertain them, she has time to explore things she'd always convinced herself weren't important because they didn't keep her in Kristin's good graces. Chelsea's grades improve significantly, she gets a job, and she finds a way to interact with the community without having to speak.

As a character novel, Speechless is incredibly effective and well-paced and explores some excellent themes about the power of words and a person's contribution to their community. If you can tolerate childish writing and a weak ending, you might want to give Speechless a try.
B-

You can purchase Speechless here.