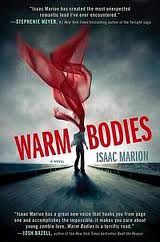 The Protagonist: R. A zombie who lives in an abandoned airport, he wonders wistfully if this is all he has to look forward to in the undeath - until he has the opportunity to rescue a human girl from being eaten.
His Angst: Um, he's a zombie. Not a lot of positives there. Also, the girl? He totally ate her boyfriend.

Julie Grigio: The daughter of the General of the local fortress-city of surviving humans, she is rescued by R and finds time to examine just how flawed humanity's survival strategy really is.

Perry: Julie's boyfriend, who is killed and eaten by R - although he continues to live on in R's head as R absorbs his memories.

Nora Greene: Julie's best friend, who helps out Julie and R as they try to convince others of the possibility of a cure for the zombie virus.

General Grigio: Julie's rigid and unstable father who will defend humanity at any cost - even though he ultimately believes humanity is beyond saving.

The Word: I decided to pick up this book when I saw the trailer for the upcoming film, which made it sound charming and original. A zombie romance? How droll!

Sadly, while the novel is beautifully written, it is also bleak, dull, poorly-developed, and is - essentially - a retelling of WALL-E, but with zombies.

R is a youngish zombie who's in better shape then most. He shuffles and groans around an abandoned airport, occasionally making raids with his zombie compatriots to catch and eat the living humans foolish enough to venture out of their fortified shelters.

The zombies have even formed a sort of society - with emaciated elders known as Boneys who marry zombies, allocate zombie children to worthy couples, hold primitive religious services, and violently defend the status quo.

Poor R is slightly different from the other zombies in that he has a brain and is capable of higher reasoning - even if he's almost incapable of expressing it beyond a few groaned syllables. When he and his friends go on a raiding party and he bites into the brain of a young man named Perry, he absorbs the boy's memories, particularly those of his girlfriend, Julie.

When R realizes that Julie is also present at this raid, he protects her by covering her in zombie blood and takes her to his makeshift shelter in a jet at the airport. There, he gets to know her better - not only by communicating with her in his limited way, but also through Perry's memories as he secretly continues to eat the remaining pieces of his brain.

Through Perry's memories we learn that the human race is not in good shape. Thanks to the zombie curse/plague that took over the world, humanity has shrunk itself to fit small, fortified lives - surviving, but at a high cost as many have felt forced to jettison "needless" activities like art and personal expression in order to serve the greater good of just getting through the day.

But as R and Julie's mysterious connection seems to indicate a natural cure to the zombie plague is indeed possible (although that cure is veeeery vaguely developed), many of the humans have become too hardened and jaded to consider taking the risk to live instead of only survive.

I could tell it was trying to convey some sort of deep message, but it failed in its execution because it stayed too damn vague to be interesting. Humanity apparently ruined itself and somehow created this plague (curse? Evil spell? NOBODY KNOWS) by becoming too - arrogant? Greedy? Apathetic? The narrative waves its hands around humanity's "badness" in a hipsterish way without really getting into it and giving it an actual reason.

Honestly, Marion does a better job demonstrating how humanity is currently killing itself in the present - buying more time to live by abandoning the very things that make life worth living - than he does with his rather pretentious jabs at humanity's unworthy past.

And then the whole problem is solved with the Power of Love. I'm not even kidding. Just like the Celine Dion song!

Warm Bodies turned out to be the type of novel I really dislike - one that takes a science-fictional or fantasy plot and uses it to tell a greater literary message, but without developing the science fictional/fantasy aspects into consistent elements of the story. It's the same problem I had with Gregory Maguire's Wicked.

You cannot make a zombie story, and then base the origins of the zombie curse (and its cure) on a metaphor. THAT MAKES NO SENSE. You don't get cancer by not appreciating life enough, and you can't cure disease with The Power Of Love - unless you clearly develop your fantasy elements to indicate this. But everything else about Warm Bodies is based on a hard type of reality - with heavily described passages about humanity's struggle to survive, the mental toll on the survivors, the intricate and interesting societies that both humans and zombies have built out of the ashes of the apocalypse.

And then the novel indicates these well-depicted, realistic and sympathetic problems would all be solved if we just Loved Life More. What the hell?

It wouldn't have been at all difficult to create a developed fantasy aspect around the novel, with its own internal consistency and logic, that would have achieved the same message without compromising the reality of the narrative. Fantasy authors do it all the time! Just read Left Hand of Darkness - it conveyed a powerful message about gender, while still having a well-realized science fictional world that was interesting and made sense.

That being said, Marion's novel does have some lovely language, and I appreciated where he was trying to go with it. I still might see the movie (although I'm very concerned that they whitewashed a character by casting a white actress as Nora), but for the book? I recommend a single shot - straight to the brain.
C

You can purchase Warm Bodies: A Novel here.

Posted by AnimeJune at Wednesday, January 23, 2013