"The Bridal Season," by Connie Brockway 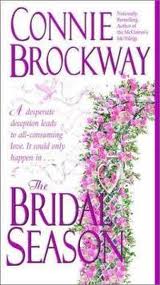 The Chick: Letty Potts, a.k.a. "Lady Agatha." When her former partner in crime burns down her house and everything in it to get her to rejoin the con artist game, she flees into the country with a stolen identity in order to lie low.
The Rub: She quickly earns the attentions of the attractive bachelor Sir Elliott March - but he's also the town magistrate, and she's working under an assumed name.
Dream Casting: Jessica Chastain.

The Dude: Sir Elliott March. Since returning from the war, losing his fiancee to another man, and almost losing his beloved father to a heart attack, Elliott's become the unofficial spokesman for polite emotional reserve. However, he takes an instant liking to the unconventional Lady Agatha.
The Rub: This Lady Agatha doesn't act the way a refined duke's daughter should - can he love her if he doesn't quite trust her?
Dream Casting: Benedict Cumberbatch.

Townsfolk: Oh "Lady Agatha!" Come stay in our wealthy home with all of your expensive things while you help us with our society wedding!

Hero's Bitchy Ex: I'm threatened by you for no reason because I love attention!

Letty: Wow, angst. Not so sweet.

Sir Elliott: Pardon me, ma'am, but I'm in love with you. Don't you find my emotional restraint and respectful behaviour dead sexy?

Letty: Dead sexy? You're about half right. *seductively pokes*

Letty: Sweet! But does it matter that I'm really a thief, con artist and music hall singer?

Letty: You're right! Let's get married!

The Word: The Bridal Season, ultimately, isn't the best romance in the world, but it was still utterly charming and the perfect balm after reading the brilliant but visceral creepfest of Gone Girl. There's nothing like well-constructed fluff to make up for a searing psychological examination of a marriage gone bad.

The book opens with a cute little mini-romance - the staid, respectable wedding planner Lady Agatha, on her way to arrange a wedding, is confronted by her French paramour who eventually talks her into eloping with him. As he whisks her away into a blissfully married future, Lady Agatha drops her train ticket bound for Little Bidewell - a ticket that is quickly snatched up by Letty Potts.

Letty Potts is the novel's actual heroine, and she's in a terrible bind. After years of petty thievery and con artistry against callous noblemen, she was forced to end her partnership with fellow con artist Nicholas Sparkle when his schemes began to depend on vulnerable, middle-class widows who could ill-afford to lose their savings. Nick responded to her two weeks' notice by burning her house down. Penniless and wearing only the clothes on her back, she sees this train ticket as the perfect way to escape and lie low.

When she reaches the tiny country town of Little Bidewell, however, she is mistaken for Lady Agatha and hailed as a saviour. Angela Bigglesworth, a wealthy but untitled girl, is engaged to marry the Marquis of Cotton, and the Bigglesworths are desperate for Lady Agatha's services to ensure the ceremony pleases the Marquis' infamously stiff-necked aristocratic family. They inform her that they have a room waiting for her, filled with the expensive luggage she'd sent ahead.

Letty initially plans to stay only long enough to get a decent night's sleep in a feather bed and make off with as many of Lady Agatha's possessions as possible. However, she is stymied by two things: her sympathy in spite of herself towards Angela Bigglesworth's plight, and her sudden and unwise attraction to Sir Elliott March, Little Bidewell's magistrate and most upstanding citizen.

This novel has very little in the way of depth but a great deal in the way of charm. Letty is delightful - she's full of guilt for her past and guiltier still for her current lie as the townsfolk worm their way past her emotional defences, but she never gives up her bright sense of humour and can-do attitude. And Sir Elliott is a deliciously far cry from most of the Alpha Males cluttering up the historical romance scene - he's a scrupulously polite, kind, and gracious man who continues to squire his spoiled, bitter and married ex around town because he's too gosh darn nice to turn down her constant attention-mongering.

Yet the author ably demonstrates just why he needs a firm shaking up from the loosey-goosey Letty. Being polite is all well and good, but good etiquette will get you nowhere if you can't express your emotions sincerely. Letty spends a good portion of the novel teasing him and twisting him into greater and more elaborate knots until he inevitably snaps - in the good way!

The protagonists definitely have chemistry, the townsfolk are adorable, and the author even attempts to add layers to the bitchy ex and obsessed villain suitor (with varying results). That being said, the novel is definitely a bit of a lightweight in the realism department. Towards the end, everything resolves itself far too easily and the heroine turns into a bit of a mopey sop. But as a pleasant, easy diversion, you can't get much better than this.
B

You can purchase The Bridal Season here.