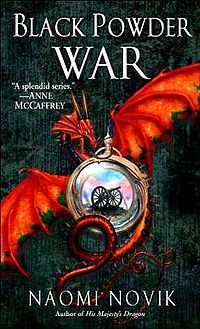 William Laurence: Captain of the dragon Temeraire and his crew. Tasked by the British Aerial Corps with retrieving three important dragon eggs from the Sultan of Istanbul.

Temeraire: A rare Chinese breed of dragon known as a Celestial. Wants to help Laurence fight Napoleon - and improve the lot of British dragons.

Granby: Laurence's second-in-command. Used to resent Laurence for gaining a dragon (since he's been waiting years for the potential honour), but now they are fast and loyal comrades.

Lien: The albino Celestial dragon companion to the deceased usurper Prince YongXing. Rendered alone and friendless thanks to her master's death, she'll go to any lengths to obtain revenge against Temeraire and his companions.

Tharkay: An aloof, half-Asian interpreter and guide who is hired by Laurence to safely lead him across the desert to Istanbul. Accustomed to racism, he acts a bit like an untrustworthy asshole to compensate.


The Word: When we last left stalwart Captain William Laurence and his beloved dragon Temeraire, they had just uncovered and dismantled an insidious plot to overthrow the Emperor of China (the events of Throne of Jade).

Set in an alternate universe where the Napoleonic Wars are fought with dragons, Laurence and Temeraire are eager to return to England to continue their fight against Napoleon's advancing forces. Before they can do so, however, they receive a sudden change of orders demanding they travel to Istanbul to collect three soon-to-hatch dragon eggs the British government has purchased at incredible cost.

After an arduous overland journey through the desert, Temeraire and his crew arrive to discover the Sultan is no longer willing to part with the eggs, claiming the enormous sum of gold sent in payment never arrived. The whole situation is extremely suspicious - especially since the Sultan's newest advisor is none other than Lien, the dragon companion to the disgraced (and now thankfully deceased) usurper prince from Throne of Jade. Lien wants revenge for the death of her prince, and she's willing to side with Napoleon to do it.

The same enjoyable elements of Novik's writing are all here - gorgeously-depicted settings, Regency humour, stellar worldbuilding. That being said, the plotting of Black Powder War was rather uneven. Instead of a focused, overarching plot, the novel takes on a linear, episodic structure as Laurence and Temeraire leap into and out of the various fires and frying pans that lie between China and Britain. While each episode is entertaining in its own way, I might have preferred some central organization as to what this particular novel Was About apart from Temeraire and Laurence Not Dying As Expected.

That being said, the conflict between Temeraire and Laurence about dragons' rights flares up in this novel, leading to some interesting dialogue. In Throne of Jade, Temeraire learned that China allows dragons to choose their own companions and occupations, learn to read, and even own property. Thanks to this, Temeraire is no longer completely satisfied with the British way of running things and anticipates creating great changes in human-dragon relations once he returns to England.

Laurence, while he ultimately agrees with the Chinese treatment of dragons, fears Temeraire's revolutionary expectations are naive and ultimately disruptive to the war effort - but doesn't know how to express this without crushing Temeraire's spirit. I really appreciated how Novik examined both points of view - Temeraire is smart and well-intentioned, but still extremely young and naive. Whereas Laurence, while he is slowly adapting bit by bit, is very much a traditionalist who views social change with suspicion.

When it comes right down to it, Black Powder War is a perfectly enjoyable addition to Naomi Novik's Temeraire series. However, as a stand-alone book in its own right, it lacks a certain focus.
B+
Posted by AnimeJune at Thursday, March 21, 2013