"The Last Hellion," by Loretta Chase 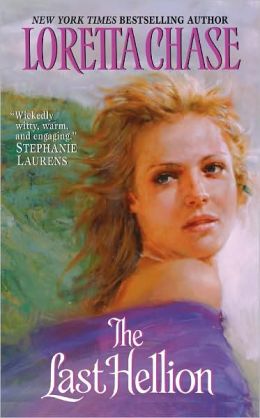 The Chick: Lydia Grenville. A successful journalist, she's pursuing a story against a notorious pimp - all the while secretly writing a popular romance serial.
The Rub: When a boorish aristocrat interferes in her investigation - and continues interfering - she has trouble reconciling her growing feelings for him with her desire to remain independent.
Dream Casting: Scarlett Johansson.

The Dude: Vere Mallory, Duke of Ainswood. Acquiring the dukedom only after the deaths of nearly all of his male relatives, Vere refuses to handle his ill-gotten responsibilities and devotes himself to debauchery and indulgence.
The Rub: When a girl punches him in the face, he decides to follow her around in order to get back at her ... yeah, that's it... not because he's starting to like her or anything...
Dream Casting: Jared Padalecki.

Vere: OMFG, every dude in my family is dead and now I'm a Duke! Obviously I must drink and debauch my pain away!

Lydia: Oh no! An evil procuress is ruining the lives of prostitutes in London and no one cares! Obviously I must pursue her and write a scathing inditement of her in my paper!

Vere: Oh look, a woman driving recklessly! Hello little lady, allow me to mansplain why getting into an argument with a lady-pimp in a slum by yourself is bad idea...

All of London: LOL! VERE GOT BEAT UP BY A GIRL!

Vere: My mansplaining powers have failed me! Why?! I know! I'll keep popping up in her life and bothering her with my devil-may-care hotness!

Vere and Lydia: *make out*

Vere and Lydia: Wow! I liked that way more than is probably good for me!

Lydia: Let me deflect this sexual tension with the asinine idea of a horse race for my hand in marriage!

Lydia: Now let's clean up that house of yours! And deal with your grief issues! And rescue your wards!

Lydia: *literally does everything* Now we can be happy!

Vere: Well that was easy! HOORAY!


The Word: The best cure for a jaded romance reader is Loretta Chase.

I, much like our hero Vere, had become rather cynical of late, especially in regards to romance novels. The last couple of romance novels I'd read had been silly, stupid, and shallow by turns, to the point where I was wondering why I bothered with the genre at all outside of a few trusted authors. As it turns out, I just needed to pick up that One Special Novel to revive my love of the genre.

Vere is, indeed, the Last Hellion of the vaunted Mallory family. Born to the fourth son of the Duke of Ainsworth, Vere finds himself with the ducal coronet after a decade of family tragedies swamps the male members of the line - finally culminating in the death of Vere's beloved nine-year-old cousin, Robin. Losing Robin is the straw that breaks this angsty camel's back, and he flees to pursue a life of indulgence and debauchery, convinced that he, too, will inevitably succumb to the Mallory curse.

Meanwhile, our heroine Lydia Grenville is pursuing a brilliant career as a successful journalist - using her wit, her gumption, and her pen, she crusades of behalf of the city's poor and downtrodden, and seeks justice for those who would exploit them. Chief among those is Coralee Brees, a notoriously violent procuress. When Lydia spots Coralee abducting a young woman off the streets, Lydia leaps into pursuit - nearly running Vere and another bystander over.

Vere interrupts the inevitable confrontation in his boorish way and attempts to silence the furious Lydia with a kiss. Lydia responds with a surprising uppercut that sends Vere ass over teakettle.

Vere is both intrigued and outraged - as news of his hilarious defeat at the hands of a woman spreads all over town, he decides to pursue Lydia with the intention of humiliating her in kind and recovering his manly reputation. Lydia is none-too-pleased by this sexist pig's attempts to insinuate himself into her investigations, but neither of them count on the instant attraction that flares up between them.

Loretta Chase proves that, so long as one uses deft plotting and expert characterization, even such disparate elements as a self-indulgent misogynist hero, a career woman heroine, pimps, runaways, secret butt birthmarks, and horse races can all come together in a deliciously enjoyable novel.

Yes, our hero is a dyed-in-the-wool womanhater, convinced that females can never strive for true equality with man - but with Chase's characterization, Vere's road to enlightenment is thoroughly entertaining. Ten long years of constant grief have taken their toll on him and he sees no point in caring about the future - until he starts caring about Lydia's. As his motivations morph from trying to best her, to trying to protect her from her own fool actions, to protecting himself from the feelings she elicits, Vere grows and changes in a wonderful and believable way.

However, as a character, he still pales in comparison to Lydia. What a fantastic heroine! A righteous journalist who, despite being a woman, is not only successful in her field but respected by her peers in said field and is financially independent due to her own efforts. Who is not afraid to get her hands dirty and knows how to defend herself. While there were a few moments in the novel (particularly towards the end) that veered dangerously close to TSTL territory, Lydia consistently proves herself to be ferociously competent at nearly every endeavour she set her sights on.

While attracted to Vere (rather in spite of herself), Lydia refuses to give in to temptation because doing so would jeopardize everything she's worked so hard for. Yet as she and Vere continue to meet and clash, she finds it harder and harder to convince herself that he's as selfish and jaded as he puts out - as does Vere, who begins to realize that ignored responsibilities have a way of coming back to bite you on the ass.

While Vere and Lydia get into some enjoyable spats, Chase populates the cast with some solid secondary characters, many of whom are recurring. Dain, the Lord of Scoundrels himself, plays a major  role without succumbing to the saccharine tendencies of most Prequel Bait characters. Bertie Trent - Dain's imbecile of a brother-in-law - also makes an appearance and, in an astounding turn of events, redeems himself as a character and winds up in a secondary romance, to boot!

Honestly, nearly everything about this novel works - the pacing, the characterization, the utilization of secondary characters and backstory. I had a bit of a niggle about the villainess, Coralee Brees - sometimes it felt as if the author couldn't decide how much to play up her villainy. One moment, she'll be described as this mastermind madam who's never been caught, who cuts up her victims' faces and throws them in the river - and the next she's depicted as being too stupid and simple-minded to hatch a truly diabolical revenge scheme. Sometimes it seemed as if the story wanted to portray her as a legitimate threat but not so much of a threat that the protagonists wouldn't be able to defeat her easily, and it just came across as inconsistent.

The novel also shoehorns in a wholly unnecessary Surprise Papa Drama subplot at the end, and that plus the depiction of the villainess dips this novel just below an A+ grade. It didn't really contribute anything to the story and it just seemed to bloat the novel past the already-satisfactory ending.

Otherwise, though, The Last Hellion is an excellent and entertaining romance with one of the strongest, most competent historical heroines I've come across. I definitely recommend it.
A
Posted by AnimeJune at Sunday, March 03, 2013