"Me Before You," by Jojo Moyes 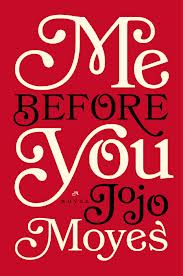 The Protagonist: Louisa Clark. She loses her job as a cafe waitress at the worst possible time - with her father's job in jeopardy and her sister's desire to go back to school, her family needs her income. So she interviews for and miraculously gets a job as a caregiver to a quadriplegic man. Good news, right?
Her Angst: Right - until she finds out her client plans on killing himself in six months and she's been hired to keep him from checking out early. But how she can convince this man not to check out at all?

The Other Protagonist: Will Traynor. He used to be a successful London financier with a penchant for rock climbing, cliff-jumping, and stunt diving - until a motorcycle accident left him unable to move.
His Angst: Now he's trapped in a life he didn't choose, and while he's promised his mother to wait six months before making his decision, he's already made it. Or has he?

Camilla Traynor: Will's wealthy magistrate mother. While outwardly cold and snobbish, she will do anything to improve her son's condition.

Treena Clark: Louisa's younger sister, who was always considered brighter and more successful, until she dropped out of university after getting pregnant. Now hopes to return to school.

Nathan: Will's personal nurse, who sees to Will's more intimate medical needs and helps out Louisa with her plans to save him.

Steven Traymor: Will's philandering father. In love with another woman, but he feels he cannot leave his family while his son is still ill.

The first few chapters of this book seemed so disappointingly predictable. Our protagonist, Louisa Clark, is a feckless 26-year-old screwup with an eccentric taste in clothes who, after losing her job at a cafe, miraculously lands a high-paying six-month contract position as a caregiver to a wealthy quadriplegic man. And of course the quadriplegic man - Will Traynor - is rude and unkempt and Emotionally Walled-Off and Can't See The Good In Life.

While reading this first chapter, I was certain I had this book pegged right up until the very end. Louisa is the Screwball Heroine whose Sweetness and Light will cure Will Traynor of his depression and they'll roll off into the wheelchair-accessible sunset. On top of that, this novel is about a subject that makes me very uncomfortable: assisted suicide. As Louisa discovers early on, Will wants to take his own life but has promised his mother to give it another six months, so Louisa's efforts to work with Will come with a definite deadline.

However, I kept reading, and was rewarded. First of all, the novel does not shy away from the more gruesome details of quadriplegic life. The constant pain and infections, the medical risks, and the innumerable tests and medications and procedures and equipment that are (and will always be) required to maintain the bare minimum standard of life for Will. Will's not just a man in a funk. He is rarely physically comfortable and his entire life as he'd known it is gone forever. The novel does not gloss over his condition and it deals with the issue of whether his life is worth living with respect for both sides of the argument.

Which makes it all the more powerful as Will and Louisa slowly start to connect. Me Before You examines the limitations people have in their lives. For Will, his limitations are physical and immediately obvious. For Louisa, her limitations are mental, emotional, and social. Louisa has low expectations of herself because she comes from an impoverished, lower-class background and believes she's not cut out to enjoy things like classical music, foreign films, or difficult novels, so she's never tried them. Thanks to a traumatic experience in her past, she's also never travelled away from her own village.

Will, formerly an extremely active athlete, world traveller, and businessman, is appalled at how small Louisa's life is. Annoyed by her constant attempts to cheer him up, he challenges her in turn to stray from her comfort zone and try new things. Louisa, very reluctantly, accepts - but only if Will will help her. Watching them both warm up to life again is one of the chief pleasures of this novel.

Moyes' character development is spectacular. Will and Louisa seem so cliched in that first chapter, until the novel examines their environments, their families, their interactions with others. Louisa's family shares this frustrating, loving, cramped, crazy dynamic that feels completely genuine and also explains so much about Louisa's personality. Will could have been a harder character to nail down since the novel is told almost entirely from Louisa's point of view - but he is simply marvellous. He's clever and sarcastic and charming and sexy. He's never turned into a symbol or an object of the plot.

And finally, the writing hits all the right notes in regard to tone. It's clever and cheerful, but not in such a shallow way that it can't convey the novel's more serious periods (and there are quite a few), and it doesn't sacrifice the story's inherent warmth and emotion. This novel kept pulling me along with sharp, insistent tugs - until I found myself finishing the novel at 9:00 pm on a Saturday after spending nearly all day frantically reading it.

Me Before You is a beautifully-written, emotional novel about love, the many forms it comes in, and the unforeseen, circuitous routes it can sometimes take. Read it with a big mug of tea and a box of tissues.
A+
Posted by AnimeJune at Sunday, March 24, 2013

Labels: A Plus Reviews, contemporary, fiction