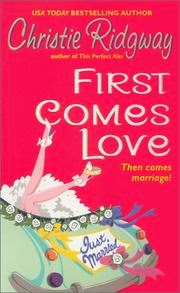 The Dude: Dylan Matthews. An FBI agent who's slaved away for the last eight years trying to atone for a teenage mistake that may have cost a woman her life.
The Rub: Finding out he's married forces him to return to a town he's desperately missed - but it's too full of excruciating memories of his failure for him to stay.
Dream Casting: Brett Dalton.

Kitty: Just because I play a hooker in my town's re-enactments doesn't mean I'm one in real life! Wish my town could see it!

Dylan: WHY THE HELL ARE WE MARRIED? THIS IS NOT OKAY.

Kitty: Eep! Let me distract you with my cutesy shenanigans and pratfalls and adorably perky boobs for the next fifty pages!

Dylan: Curse your adorably perky boobs! But you're going to have to answer the question some time!

Kitty: Oh, it was just that I've been secretly in love with you this whole time and never slept with another person because cheating is wrong! But I forgive you for doing it!

The Word:
In First Comes Love, Christie Ridgway creates one of the most well-realized and metaphorically clever settings I've ever come across in romance. Hot Water is a former Gold Rush town that's devoted to the past - in more ways then one. Not only does the bulk of its tourism revenue come from its historical reenactment district (called Old Town), but its social stratification is also based on your ancestors' history.

And Kitty Wilder is sick of it. Her family is descended from Rose Wilder, the town's first ho and proprietor of The Burning Rose brothel. Since then, every woman in the Wilder family has lived under (and up to!) that reputation - including Kitty's mother, who abandoned her as a baby. Kitty is nevertheless devoted to the town and works herself to the bone to crawl out from under her family's licentious history - but, in a hilarious paradox, she does so by dressing as a madame and reenacting that history every weekend for tourists. I loved this concept.

Kitty longs for conventionality, and deeply resents how the town continues to tar her with the same harlot brush despite her nun-like existence. And now that her scandalous mother has unexpectedly returned to town, revving up the Wilder rumour mill once again, she believes the only way to escape her past is to leave Hot Water for good - once she pays off her college debt to her great-aunt Cat.

All her plans come crashing down when the last man she expected to return to town interrupts one of her tours - Dylan Matthews, her husband of eight years. Who has only just realized this fact.

Dylan Matthews is a workaholic FBI agent made famous by his numerous high-profile rescues of women and children. Son of the town judge, descendant of Hot Water's first sheriff, and destined for law school, he was Hot Water's Golden Boy until he attempted to intervene in a carjacking. While he managed to rescue the children in the car, the driver (his best friend's wife) was killed. Haunted by this failure, he left Hot Water to join the FBI and never looked back.

He is furious that Kitty's legalization of the joke marriage certificate they got as teens has forced him to return to a town whose hero-worship of him wracks him with guilt.

Unfortunately, a quickie divorce is not in the cards. Kitty, in order to pay off her college debt, forces Dylan to become Old Town's reenactment sheriff for the summer (in return for his divorce) in order to boost Old Town's sales and get her enough money to leave town guilt-free.

BUT - that "nonconsensual marriage thing" is a pretty huge flaw to swallow, and one I continually struggled with throughout the novel. Did Kitty seriously never consider how her actions might affect Dylan later on? Did she never wonder what would have happened if Dylan had wanted to marry somebody else? And the "secret reason" she did it is meant to be romantic (she was in love with him the whole time!) but in reality is just really creepy. Especially once we learn she's remained chaste this entire time because she was remaining "true to her marriage vows." Honestly, I just heard the Psycho soundtrack in my head whenever she brought it up. That's not a healthy mindset.

It's interesting to read this romance after Nobody's Baby But Mine. Both romances are about heroines who intentionally do something that monumentally affects their heroes' lives without their consent or knowledge - and both of them do it for stupid reasons. However, while I still think Kitty is bonkers, she doesn't possess that same obnoxious entitlement and privilege that Jane does. Kitty's upbringing was lonely and difficult, and she's worked so hard to be the Perfect Upstanding Citizen to people who only see her mother's actions, so her bonkers decision is - WHILE STILL NOT OKAY - easier to interpret as a misguided teenage mistake, rather than a selfish, privileged decision.

Besides, Kitty and Dylan have good chemistry and are generally good people (extortion and obsessive behaviour aside), and the setting is well-realized and ultimately positive without being a corny and idealized small town. There are some definite drawbacks to living in Hot Water and Kitty endures pretty much all of them.

I was a little squicked out by the secondary romance because it's between Dylan's father D.B. and Kitty's neglectful mother Samantha. It's just a kind of pseudo-incest scenario that bothers me. However, I really appreciated how Kitty and her mother eventually obtain an adult reconciliation but never become close. Once we got Samantha's viewpoint, I was afraid there'd be some dialogue or explanation about how Kitty "owes" Samantha forgiveness, love and understanding simply on account of their shared genes. But that's not true - Samantha dumped Kitty as a baby, and Kitty's over it, but Samantha doesn't suddenly regain her "mother" role. I liked that.

All in all, despite a bonkers premise, First Comes Love is an enjoyable (and often very funny) romance with a great setting.
B+
Posted by AnimeJune at Sunday, November 24, 2013