"How to Say Goodbye in Robot," by Natalie Standiford (Scholastic, 2010) 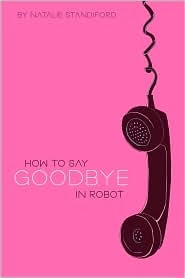 The Protagonist: Beatrice. Called a "robot" by her own mother because of her inability (or unwillingness) to make firm attachments, she's about to start her senior year of school in Boston.
Her Angst: Her parents are fighting, her mother keeps acting weirder and weirder - and this strange boy at school interests her more than she'd like to admit.

Jonah: Nicknamed "Ghost Boy" by his peers for his pale appearance and solitary status, he hides a creative and kooky heart - and a dark family past.

Anne: One of the popular kids at Bea's new school who tries to befriend Bea.

Tom: A popular guy at Bea's high school who has a reputation for dating and dumping new girls.

The Night Lights: A group of (mostly elderly and weird) people who all listen and call in to a late night radio show about aliens and time travellers.

Matthew: Jonah's severely disabled brother, who is currently in a private hospital because he requires constant care.


The Word: I picked up this book because it was the Forever Young Adult Bookclub's November pick, and I just so happen to be the co-founder of my hometown's branch of the FYA Bookclub.

Thanks to her family moving around a lot at the behest of her college-professor father, Bea has never had an easy time forming relationships - a trait that causes her emotionally-unstable mother to call her a "heartless robot." Well, all Robot Girl wants to do is get through her last year of high school without being noticed.

Until, on her first day at her new school, she meets Jonah, a pale, antisocial teen the other students call "Ghost Boy." He hasn't had a friend in ten years - not since his mother and disabled twin brother were killed in a car accident when he was eight. However, Bea discovers she has far more in common with the unusual and creative Jonah than the rest of her privileged private school peers, and against all odds, the two form a friendship.

Then Jonah makes an amazing discovery - his brother Matthew isn't dead. Instead, he's been in an institution this whole time. His father, determined that Jonah should live a "normal life" without being "burdened" by his severely disabled brother, refuses to tell Jonah where Matthew is being cared for, so Jonah and Bea have to come up with a plan to find Matthew - and maybe even rescue him.

How To Say Goodbye In Robot is a detailed study of an unusual, flawed, but ultimately positive relationship. Jonah is a very imperfect character - while creative and interesting, he can also be callous, judgemental, selfish, and extremely jealous of whomever Bea befriends other than him. Bea often finds herself questioning the definitions of their relationship - are they boyfriend/girlfriend? Not really, but calling themselves "just friends" doesn't seem enough, somehow. Either way, Bea grows to learn that she's not nearly the heartless Robot Girl she believes herself to be.

Despite these points, How to Say Goodbye didn't leave a huge impression on me. It's a very quick read, and it doesn't really delve into any theme other than "Feelings Are A Bitch" with any particular depth. The resolution to Bea's parents' drama seemed rather anticlimactic to me after all the sinister build-up, and Matthew's storyline remains a dramatic yet strangely irrelevant plot device that doesn't really contribute to any particular message or idea. Even after finishing the book, I remain at a loss as to what Matthew's storyline was supposed to contribute to the story - and since it's the central plot, that's a pretty large mark against How To Say Goodbye in Robot.

All in all, How To Say Goodbye In Robot has some cute and creative points, but is ultimately a "m'eh" book. I didn't really take anything away from this book. It wasn't an unpleasant read, but it didn't give anything back for the time I spent reading it.
C+
Posted by AnimeJune at Saturday, November 02, 2013