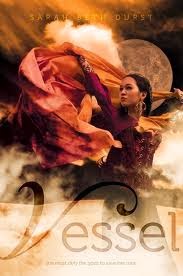 The Protagonist: Liyana. As the vessel for her clan's goddess, she has been chosen to die so that her goddess may live in the physical realm.
Her Angst: What's a heavenly sacrifice to do when the sacrificer fails to show?

Korbyn: The trickster god of the Raven clan, who successfully found his vessel but must rescue his heavenly brethren so that they can find theirs.

Fennick: The vessel of the Horse clan. Proud but stubborn.

Pia: The blind vessel of the Silk clan. She has devoted her entire life to her cause and follows every holy rule to the letter.

Raan: The unwilling vessel of the Scorpion clan. Sees the abduction of her goddess as a ticket to freedom and the life she believes she deserves.

The Emperor: The ruler of the Crescent Empire. His entire land is dying, but he just might have an unconventional way of saving his country - if only those pesky desert people don't get in his way.


The Word: Liyana, a young member of the Goat clan of desert nomads, has always known she doesn't have a future - ever since she was small, and her clan's magician discovered she was destined to be the vessel for her clan's goddess, Bayla.

Every one hundred years, the deity of each desert clan emerges from the spirit world of the Dreaming to take over the body of one of their chosen people, and work enough miracles to provide for their respective clans for the next one hundred years. While the soul of each vessel has to die in order for their god or goddess to walk about in their skin, their sacrifice ensures the continued survival of their people. The deities are required especially now that the Great Drought has rendered life in the desert even more difficult.

However, when the special day arises, Liyana dances the ritual dance - but Bayla doesn't come. Her clan, appalled at what they deem as Liyana's failure and Bayla's displeasure, abandons her in the desert to try and appease their goddess. Before Liyana succumbs to the elements, she is rescued by Korbyn - the desert god of trickery who successfully found his vessel. According to Korbyn, Bayla and four other clan gods have been kidnapped by an unknown enemy, and it is up to Korbyn and Liyana to seek out the other clans' vessels and try and rescue their deities.

I've wanted to read this book for a long time thanks to the great reviews and what sounded like an awesome premise, and on that score, the book doesn't disappoint. Vessel's world building is simple and elegant - conveying a fantastic desert culture and magical system without bogging it down with millions of different names or concepts.

The novel also focuses just as much on the human story as it does on the magical one. Liyana is an intriguing character - she's spent her whole life in perfect obedience, keeping her body pure, avoiding attachments, training her body to be the perfect instrument for her goddess. She's been raised to believe she's important, that she's responsible for the survival of her clan, but only as an object for someone else's power. Abandoned by her clan and saddled with this near-impossible quest soon teaches her how to find power in her own agency.

But at what cost? As Liyana meets up with different vessels, she discovers that not all of them welcome the fate of being honourably murdered for the good of the clan. Thanks to the Great Drought, countless lives will be lost to thirst and starvation without divine intervention. However, as one character wonders, what are the vessels really saving? Are they saving the lives of the clans - or the way of life that keeps the clans in the inhospitable desert, when instead they could move to an easier environment where magic isn't required?

The author explores the different angles of this theme - the morality of killing a few in order to save an entire people - using all the different characters and their backgrounds, from the fanatically-obedient Pia to the rebellious Raan, to the Emperor of the Crescent Empire. Interestingly, the most bland character of the bunch is Korbyn, an actual god inhabiting a human body. He never really came across as godlike to me - trickster or no. He just seemed like a particularly jovial teen with phenomenal cosmic powers. He doesn't even endure a lot of conflict or angst. Perhaps I'm comparing him too unfairly with NK Jemisin's portrayal of deities in The Hundred Thousand Kingdoms, but there was nothing about his personality or his decisions that rendered him distinct from the human characters.

While the novel has an original setting, colourful characters and engaging themes, overall the book didn't wow me as much as I thought it would. While the book does a great job setting up the difficult conflict - is there a way to protect people from the Great Drought without killing other people? - it fumbles royally when it comes to solving that conflict. Despite the lead up and the tension and some truly awesome action scenes, the book concludes with a solution the main characters already discussed and declared to be untenable. So how was stuff solved? Are we just supposed to believe in the power of love? What? Ugh, whatever.

Vessel has a lot of things going for it - an original premise, thought-provoking themes, and an awesome heroine. Just don't get too invested in the actual conflict.
B+
Posted by AnimeJune at Monday, November 18, 2013

Labels: B Plus Reviews, Fantasy, YA