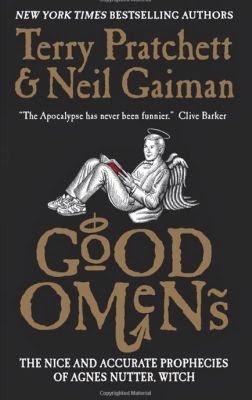 Crowley: A Fallen Angel who wears dark glasses and drives a Bentley.

Aziraphale: An Angel (unfallen), who collects antique books and wears a bow tie. Friends with Crowley.

Anathema Device: A young witch, and descendent of a woman whose book of prophesies has accurately predicted every major event in her life.

Newt Pulsifer: An apprentice witchfinder, for no particular reason than he has nothing better to do with his life.

Adam Young: The 11-year-old Antichrist, who's more concerned with climbing trees and playing games in the hedge than de


The Word: I'm not the hugest fan of Terry Pratchett - I read one of his Rincewind books and thought the humour was just too over-the-top for my taste. Neil Gaiman has also been hit or miss for me. Loved 1602, Stardust and Coraline - disliked American Gods.

So what would it be like to read a book written by both of them together? Amazingly, rather pleasant. Gaiman tones down Pratchett's goofball humour and Pratchett lightens up Gaiman's moody navel-gazing, and the result is a pleasant, often funny, if a bit overlong novel.

So the end of the world is apparently nigh - the Antichrist has just been born, which means in a few years' time the world will come to an end as the armies of Heaven and Hell duke it out for Best Afterlife Ever. However, two small, insignificant peons in these supernatural armies are not as excited for this splendid event. Aziraphale (an angel) and Crowley (a Fallen angel) have become friends during their petty squabbling over the souls of humanity, and they've rather come to like the human world.

On top of that, thanks to the incompetent machinations of a group of Satanic nuns, the infant World-Destroyer is accidentally switched with another baby and sent home with the wrong family, where he grows up without any supernatural influence, Good or Evil. However, the Apocalypse waits for no one, and as events ratchet up towards the end of the world, Crowley and Aziraphale - with the help of some kooky characters and a book of disturbingly accurate prophesies - have to keep the world in one piece as much as possible.

Good Omens is extremely cleverly written, with almost non-stop humour from start to finish. For the most part, the novel trots along at a nice clip as the narrative lightly tip toes along, across, and around weighty issues such as Free Will versus Fate, Good versus Evil, Human Nature, and the catchiness of Queen songs. The plot is rather slow-moving (the whole story takes about a week, all told) and is more of an excuse to cleverly skewer pop culture, religion, politics, and other subjects inappropriate for the dinner table.

That being said, the novel does begin to overstay its welcome about three quarters in. I actually found it difficult to keep track of some of the characters, since many of them (Anathema and Newt, to name a few) are almost entirely superfluous to the plot. The pacing could have been tightened in many places, and around the end a lot of the humour feels more like padding than plot.

All in all, though, Good Omens is a quirky, funny read with a great deal of imagination and wit - even if it's a little short on story.
B
Posted by AnimeJune at Monday, November 11, 2013