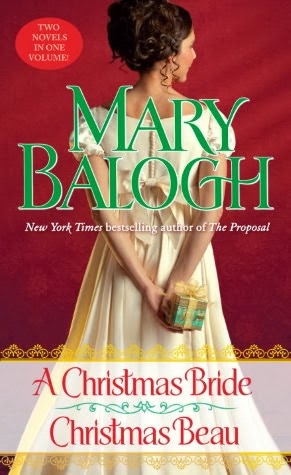 Mary Balogh's bundled Christmas Bride/Beau is an interesting book because it clearly establishes what Mary Balogh does well - and what she doesn't.

When she meets Edgar Downes, a prosperous merchant, at a party, she is immediately and inexplicably attracted to him. Edgar, in order to fulfill a promise to his father, is looking to marry a well-bred lady by Christmas - hopefully one who's able to look past the fact that he's not a gentleman. However, he's drawn to Helena as well, and the two share an uncharacteristic but hotly passionate one-night stand. Then Helena gets preggers. Whoops.

Part of the reason I loved this novel is that it indulges one of my favourite tropes - the Witty, Troubled, Morally-Ambiguous Heroine. Helena is not a very nice person and Balogh doesn't sugarcoat her, but the majority of her bitterness is directed inward. She hates herself for what she did to a stepson who trusted her, and her self-loathing has caused her to retreat from all forms of commitment or happiness. It takes some reckless bravery on Edgar's part - combined with Edgar's endearing family and the Christmas season - to convince her to forgive herself and move on with her life.

Balogh ably balances dark and light in this novel. Helena's sarcasm and anxiety prevent the Christmas aspects of the story from becoming too cutesy or cloying - the gathering of holly and the creation of a kissing bough are adorable but Helena's observations keep the story grounded. For his part, Edgar is a very controlling hero who finds he's happier with a mature woman who can counter him than the dewy eighteen-year-old marriage prospects he was initially looking at.

Christmas Bride also has a superbly organized supporting cast of previous Heroes and Heroines who contribute to rather than clutter up the storyline. The novel even improves upon the story of Priss and Gerald from A Precious Jewel. Balogh has stumbled before when including Prequel characters (see the bloated mess of Simply Love) so this was a delightful surprise.

Christmas Bride hits all the right spots for a Christmas story - warm, loving, but spiced with angst.

Christmas Beau, on the other hand hand - oy.

The story is as follows - once upon a time, Judith and Max, Marquess of Denbigh were engaged to be married. It was an arranged match, and Judith found Max creepy, cold and heartless - so she ran off with another dude a month before the wedding. That marriage didn't turn out so well either, but now that dude's dead and Judith is preparing to celebrate her first Christmas out of mourning with her two young children, Rupert and Kate, and her self-pitying dishrag of a sister-in-law, Amy.

However, for the first time in eight years, Max has returned to London as well - with revenge in mind. During their betrothal, Max was madly in love with her, and was horrifically brokenhearted by her desertion. He now plans to inflict the same pain on her - by seducing her children.

Creeped out yet? Yes, he cozies up to her kids and tempts them with horsie rides, candy and fairs and invites them to his isolated manor house which he's filled up with Christmas trees and abandoned street urchins (for reals). And Judith - despite being royally grossed-out by his overtures - is simply forced to comply because, in this novel, any mother who doesn't utterly martyr herself for her children at every opportunity is a Horrible Person. Man up, Judith. Your kids are under six - they'll get over it.

Every character has something to hate about them. Max is an asshat of the highest order. So he was crazy in love with Judith - but not crazy enough to demonstrate or express that love in any way. According to Judith, he never even smiled during their entire courtship. But he still plans to punish Judith for not MAGICALLY cluing in to his Secret Squishy Feels.

Judith, meanwhile, is an insufferably short-sighted martyr who believes her children's immediate happiness is worth more than getting them away from a Creepy Stranger With Designs On Her. Her reasons for disliking Max during their courtship were perfectly valid, but the novel is determined to Teach Her A Lesson for not giving cold, unsmiling, silently awkward dudes the sympathy they deserve.

We also get a drippy secondary romance for Amy, the sister in law who simply can't shut up about how Unlovable and Ugly and Childless and Futureless she is, and some random dude who inexplicably finds her self-pitying whining charming.