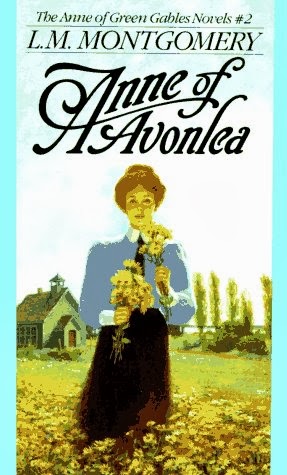 The Protagonist: Anne Shirley. Now 16 years old, she teaches the children of Avonlea while looking after her guardian, Marilla.
Her Angst: Reality won't stop intervening in her attempts to have a perfectly blissful year.

Gilbert Blythe: Anne's friend who is totes in love with her. Has decided to give up teaching to become a doctor.

Marilla: Anne's guardian - she's not as young as she used to be, but at least she's not going blind anymore.

Mr. Harrison: A cantankerous old bachelor who is mighty set in his ways.

Davey Keith: A young orphan (and budding sociopath) who is adopted by Anne and Marilla, along with his sister Dora.

Paul Irving: A new pupil in Anne's class who is sometimes ridiculed for being too sensitive and dreamy. Just you wait until puberty!

Anthony Pye: The worst. Of course.

Miss Lavendar: An eccentric old maid who has a history with Paul Irving's widowed father Stephen.


The Word: Well, it's December - time for another month of re-reads! Since I read Anne of Green Gables last year, it makes sense that I would read the sequel, Anne of Avonlea, this year as well.

Much like Gables, Anne of Avonlea doesn't really have a plot, but instead chronicles the next two years of Anne's life in a linear chain of heartwarming or comedic episodes. Most of these episodes have to do with Anne's experiences as Avonlea's newest schoolteacher, her efforts heading the Improvement Society (an attempt by Avonlea's youth to pretty up the town), and her attempts to teach and raise two very different boys - her new pupil Paul Irving (a shy dreamer) and the irrepressible orphan Davey (who might possibly be the son of Satan).

While Anne of Green Gables is a beloved classic - I've heard that the later novels are…less classic. I've read about four books into the series and have loved all of them, but I can kind of see where the complaints come from. Sure, some of the stories may seem a little idealized - and while I love Anne's melodramatic ways, it gets a little bit cloying when she discovers and interacts with two more melodramatic dreamers (Paul and the eccentric Miss Lavendar). I mean, you can't all be crazy manic snowflakes.

And yet, despite the episodic nature of the novel, Anne grows and matures. She deals with far more responsibility in this book - not only does she have to teach the children of Avonlea, but she also finds herself in charge of a pair of orphaned siblings. Her fairy fancies are consistently tempered by the reality of her setting and her increasingly-competent interactions with such a setting. While she still gets into scrapes, it's because she's creative and impulsive, not because she's stupid. My favourite chapter is the one where Anne meets her favourite author - fangirl behaviour really hasn't changed much in the last century.

Anne of Avonlea might be episodic and linear, but it's never repetitive. Montgomery understands her characters' charms but also allows them to change and develop. I still found this book endlessly enjoyable, a real comfort read during the stresses of my trip to New York City.
A
Posted by AnimeJune at Monday, December 16, 2013