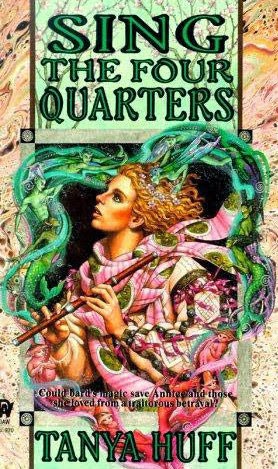 Annice: A former princess, who was cast out of the royal family when she chose to become a bard. Ten years later, she's unsure of how to tell her estranged family that she's pregnant - especially since her brother the King forbade her to have kids.

Pjerin: The Duc of Ohrin - an ignored principality of King Theron's kingdom that guards a mountain pass into a hostile country. When he's accused of abetting that country and finds himself saying words that aren't his when questioned, he knows he's been set up - but by who?

Stasya: Annice's girlfriend who worries about her health and helps Annice try and clear Pjerin's name.

Olinda: Pjerin's scheming aunt who wants him out of the way so that she can grab power for herself.

Albek: A con artist from the neighbouring hostile country who helps Olinda with her treasonous schemes.

Gerek: Pjerin's four-year-old son and heir. Olinda hopes to use him as a figurehead once Pjerin's out of the way.

King Theron: Annice's brother. Has pigheadedly refused to deal with the equally pigheaded Annice for  ten years, but now regrets the bitter gap between them.

The Word: This always happens sooner or later - not everything you loved as a kid, or a teenager, or a younger adult always holds up when you read it again. I initially read Sing the Four Quarters (and the three following novels in the quartet) in my early teens, when I was huge into my Epic Lady Fantasy phase - Robin Hobb, Kate Elliott, Melanie Rawn, Mercedes Lackey before her Magical Horse Books got stupid, Mickey Zucker Reichert whose novels were already stupid but enjoyably silly.

Oddly enough, I'd never re-read this novel until now. The story takes place in a world where the four elements are controlled by kigh: playful, unpredictable spirits who can be managed and cajoled through music. People with the ability to sing the kigh are called bards, and they tramp up and down the country singing songs, conveying messages and fixing problems in service of the king.

However, when 14-year-old Princess Annice joins the bards in defiance of her brother Theron's wish to marry her off to the prince of a neighbouring country, the young king strips her of all royal privileges, cuts her off from the family, and bars her (on pain of treason) from marrying or having children without his express permission.

Ten years later, Annice comes back from her bard's Walk to discover there's a reason she's tired and throwing up all the time: she's pregnant. Moreover, before she can find a politic way to inform the brother she hasn't spoken to in a decade, the father of her baby - Pjerin, the Duc of Ohrid and handsome one night stand -  is accused of conspiring with an enemy nation and admits to treason when put to Bardic questioning.

Annice knows there's no way she can tell the King about her pregnancy now that both her baby and her babydaddy are traitors, but she also suspects that something's not quite right about Pjerin's confession, especially since Pjerin maintains his innocence. Throwing caution to the wind, Annice rescues Pjerin from prison, and the two hie off to see if they can find out who set Pjerin up.

Let's start with the good - I didn't quite grasp this when I first read it at 13 or 14, but Sing the Four Quarters is an entirely sex-positive, feminist, LGBT-friendly fantasy novel. Annice is bisexual and in a committed relationship with her girlfriend, Stasya. Gay marriage exists - hell, gay political marriage exists (Annice's uncle turned down the offer to marry a foreign prince), women and men are found in equal numbers in almost every type of job, and premarital sex and bastardy carry little to no stigma. Best of all, none of this ever merits more than a passing mention when establishing setting - there's nothing special or remarkable or abnormal about any of it. For a novel published in 1994, that's pretty awesome.

However, despite all this positive stuff, this re-read ultimately didn't measure up to my memory of it. Yes, there are positive feminist themes and excellent LGBT representation and family issues and magic,  this novel would be practically perfect - except it isn't. Firstly - I had some serious problems with Pjerin, the male protagonist. He is an entitled ass - and I really could have gone without knowing he repeatedly banged his biological aunt.

Secondly, for a novel with such interesting themes, its story is pretty boring. Sing the Four Quarters packs a lot of content - but not all of that content is valuable to the narrative. A lot of it is redundant explanation of character motivation - Annice does something, but not before she explicitly tells us why she's doing this and why the world she lives in supports such an action, etc. The pacing is frustratingly slow-moving and dense, which works against the story itself since the latter half of the novel is really one extensive chase sequence. I finally gave up once I reached the halfway mark and skimmed my way to the end.

However, I would hesitate to condemn this novel out of hand. It may have bored me, but it had a lot of good things going for it. If you're more into uber-detailed high fantasy, you may really enjoy this novel. However, if you're more into faster-paced, less cluttered stories, you're out of luck.
C+
Posted by AnimeJune at Thursday, December 26, 2013