"The Disreputable History of Frankie Landau-Banks," by E. Lockhart 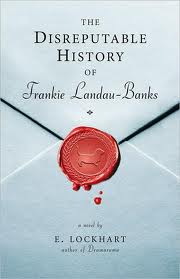 The Protagonist: Frankie Landau-Banks. A sophomore at the prestigious and expensive Alabaster Academy who gains the attention of a popular high school senior and his friends.
Her Angst: She loves her senior boyfriend - but she loves his circle of manfriends and their super-secret manclub just as much. Can she somehow prove she is worthy of their Old Boy respect?

Matthew Livingston: The heir to a massive newspaper fortune and Alabaster's arguably most popular senior, he asks Frankie out at the start of the year and is soon her boyfriend. However, are still parts of his life he won't share with her - like his super-secret no-girls-allowed club - the Loyal Order of Basset Hounds.


Alessandro Tesorieri, a.k.a. "Alpha": The social top-dog of Alabaster until his mother's financial problems forced him into public school for a year. Now back on a scholarship, he and Matthew uneasily share the leadership of the Loyal Order of Basset Hounds.

Trish: Frankie's chill roommate. Her boyfriend in the AV club has the keys to the school, so she's well connected. Would rather bake with her mom than hang out with the guys.

Porter: A junior member of the Basset Hounds, and Frankie's cheating ex-boyfriend. Not altogether a wholly terrible guy, though.

Angst Checklist:
The Word: The story really starts with a pair of boobs.

Or rather, what happens when socially-invisible Frankie Landau-Banks grows a Pair of Boobs before returning to her exclusive boarding school, Alabaster Academy, for her sophomore year. She quickly catches the eye of campus golden boy Matthew Livingston, a senior, and the two start dating. She comes to appreciate the status and the camaraderie that comes from hanging with Matthew and his privileged friends - particularly Alpha, a boy who continues to dominate Alabaster's social scene despite having to return for his senior year as a scholarship student.

As the daughter of an Alabaster alum, Frankie's aware of the school's uber-secret society known as the Loyal Order of Basset Hounds, a cloak-and-dagger Old Boys club dedicated to pranking the student body while in school and providing a Rich White Male Support Network to its members after graduation. Even after Frankie finds out that both Matthew and Alpha are members (and that Alpha is, in fact, their de facto leader), they continue to leave her out of the loop - for unlike the rest of the school, the Basset Club has remained strictly boys-only.

That is, until Frankie winds up finding the Basset Club's long-lost chronicle/Bible/strategy guide, The Disreputable History. Worried that Matthew might be underestimating her true worth (and fearful of being cut off from his social circle as a result), Frankie sets out to impress him by secretly infiltrating the club (through truly brilliant means!), using the tips set out in the History to return the Loyal Order of Basset Hounds to its former glory.

What (pleasantly) surprised me the most about this book was, well, the complete lack of a romance. A love triangle seems inevitable in the earlier chapters since Matthew and Alpha easily fit into the romantic triangle tropes - the "Normal" One who is Too Good To Be True, and Is Thus Doomed (Matthew); and the "Bad Boy" Underdog With A Dark, Sexy Past (Alpha).

But this book isn't about romance - despite how the plot emerges through the heroine's desire to impress her boyfriend, it's not about getting the guy. It's not even about being One of the Guys - it's about Frankie's growing ambition to Be A Girl Who Can Be Taken Seriously While Hanging With Guys. This book will crawl into your brain and make you rethink male-female interactions, and how frustrating it can be to be a Girl who likes "Girl Stuff" when "Girl Stuff" is continually viewed as less important by the opposite sex.

And Frankie's a great character. She's smart and ambitious and not entirely likable and still very young - just 15, and hanging out with 17- and 18-year-old guys. While she genuinely likes Matthew, her proximity to his lifestyle only hammers it home how little she truly fits in with his Old Boy group, and how little she's expected to fit in, because she's only a girl, a girlfriend, a detachable accessory who can be easily cast aside, forgotten and replaced. Through her relationship with Matthew, Frankie's motivations evolve from wanting to please and impress him to wanting to outwit him, to surprise him, to prove that she cannot and will not be forgotten. Frankie even starts to develop these feelings for Alpha, since, as a slightly smarter knife in the drawer than Matthew, he represents more of a challenge.

As for the writing style, it's highly entertaining, if a little over-stylistic. We have a very chatty omniscient narrator who generally follows Frankie's POV but will happily scurry all over the place, breaking the fourth wall every now and again. The narrative tends to jump forward and backward in time a lot and change focus on a dime, which can take some getting used to.

Most importantly, The Disreputable History of Frankie Landau-Banks made me think, both during and after I read it. It made me think about gender politics, about women, about "girl stuff," about whether girls should try and adapt to fit the "man's world," try to beat guys at their own "man's world," or actually take a chance and try to show people there's a bigger world out there with more than one worthy gender in it. A thoughtful, intelligent and entertaining read with a stellar heroine.