Getting Ready for BEA 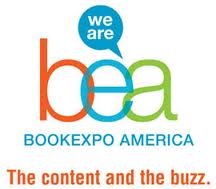 This year, I decided not return to the Romance Writers of America National Conference. I've gone for three years, had a great time, but genre-wise, I'm moving on. I still love romance, continue to read romance, and my books will definitely have romantic elements, but I'm broadening my reading horizons.

And so I became interested in Book Expo America. For several reasons:
But it's also a very, very big conference, quite easy to get lost in, to get overwhelmed in, and quite honestly the Book Expo website is not always the most helpful or organized of internets. I'm frankly a little terrified. So I did some searching and digging and followed the #BEA12 hashtag on Twitter, and found a real gem of a blogger who handily gathers a host of other bloggers' tips and tricks into one easy post. I've also been asking around the blogo- and Twitterspheres for interesting tips. Given what I've learned, my plan is thus:

1. The Soles of My Feet Are Reserved for Baby Ducks Only: One of the most unanimous tips is to wear comfortable footwear. The Javits Center is apparently 4 New York blocks long, so you will be frequently walking whilst carrying increasing amount of weight. Plus a lot of sightseeing in New York is more efficiently done on foot. I tried breaking in new sandals a few weeks ago and injured a tendon in my heel, leading to a frenzy of worrying and WebMDing. My $100 sandals were a bust, as were the $300 Beautifeel shoes (which I thankfully already had at the back of my closet), but I unexpectedly found salvation in a $37 pair of backless sandals from Payless.

2. I'm bringing extra luggage. I did a little research - I found out Air Canada's charge for extra luggage up to 50 pounds in weight is $35. I went to Canada Post and found out shipping a 50 pound box of books between New York and My Home Town is around $100 (I think, neither Canada nor US Post is very helpful about the cost of ground shipping). You do the math. In my case, to accommodate my expected loot, I'll be packing lightly, and I'll either bring an extra wheeling suitcase, or a collapsible dufflebag to fill with books and check in as extra baggage on the way back (this also means I won't be charged an extra $35 on the way there).

3. I'm bringing my own eats. I expected to do this anyways - as someone with a nut allergy, it's always good to have a least some food I can trust. And apparently the food at the Javits is crazy-expensive to boot. I'll also pack my water bottle.

4. I'll be checking my greed at the door. Or at least, trying to. Just because something is free, doesn't mean it's good - it's also not actually free. For every book I take, I'll have to haul it around in a heavy tote bag for a good portion of the day, drag it from the Javits Center, and pay extra to have it put on a plane. And then Customs! And then it'll take up valuable space in my teeny-tiny apartment! So I have to make sure it's something I want. As well, if I take a book just because it's free - it means there's one less book for the attendees who would really want it.

One blogger actually wrote (paraphrasing) "Nobody will be offended if you pick up a book, read the back, and then put it back down." I'm one of those people who needed to hear that. At conferences, I used to fear that publishers or authors would be hurt if I "rejected" their novel right in front of them. At BEA, they know it's just not your cup of tea, and that there are 100 readers behind me who are searching for exactly that cup of tea.

5. I've started using an eReader! One of the tips I've read is to bring an eReader instead of books to amuse myself on the plane. The rationale being - more room to bring books back! As it turns out, my mother received a Kobo Vox as a gift but realized she ultimately preferred reading on her iPad, so she lent the Vox to me to try out. I'll admit, there's a part of me that feels I'm betraying the beautiful paper books lining my shelves. But! I'm doing this so that I can bring more paper books back. As it is, I'll be the one reading Where It Began by Ann Stampler and The Famous Heroine/The Plumed Bonnet by Mary Balogh on the plane.

6. I'm putting my phone on Airplane Mode. I looked up a Data Roaming package for my Blackberry, but it's just a discount. So instead of my phone bill being eyeball-hemorrhagingly expensive, it would just be exorbitantly expensive. Yay? According to experts and previous Book Expo attendees - the reception in the Javits is infamously terrible and spotty. So what's the point? My hotel room comes with free internet, so I'll update after hours.

8. I'll be packing light, but right. All the tip pages I've seen are telling people to pack light, but a lot of them also emphasize that what you pack must also be nice. The unspoken dress code at BEA is business casual and a couple of bloggers have outright said that although jeans technically can be worn, you'll get treated better and taken more seriously in more professional clothing.

9. I'm bringing small bills. Past attendees have warned that a lot of the books aren't technically free - booths often ask for small donations in return. It's also nice to have ones and twos for tipping cab drivers and buying hot dogs (there's apparently an awesome hot dog cart right outside the Javits). HOWEVER, if you are like me, a native of a reasonable country with multicoloured and easily identifiable money (Canada), be extra careful when handing out bills because American money is ALL GREEN. I know! Stupid, right? One of my Canuck friends accidentally tipped a waitress with a fifty and was too polite to ask for it back.

10. I'm going with the flow. A lot of the tips have people making elaborate multi-highlighted spreadsheets and detailed calendars and ... I can't do that. There's just too much going on. There's apparently a list on Edelweiss of all the books to be found at BEA, but I don't know when or where they'll be given out - and besides, I'm not here (entirely) for the books. I have definitely entered my ultimate BEA experiences and events and autographings into my Blackberry Calendar, but I also don't want the experience to be like a grocery trip - making a detailed list of everything and then going and picking it up.

Me? I've decided I'm going to explore. Again, my ultimate Must Dos are in my calendar, and my fave publishers' booths will be marked out on my BEA floorplan, but I plan to spend most of my time walking around, looking, talking to people and publishers, and reading the backs of what books I find. All these books will be released eventually and the vast majority of them will wind up at my local library.

What about you? Are you going to BEA? Does it sound like I have the right idea, or am I way off my rocker? Any other tips and tricks?