"A Gentleman Undone," by Cecilia Grant 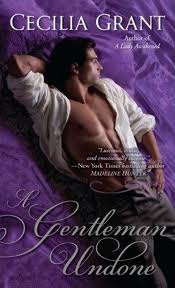 The Chick: Lydia Slaughter. A former brothel worker who is now the kept woman of a wealthy gentleman.
The Rub: Lydia knows the shelf-life of a mistress isn't particularly long - so she hopes to earn her independence using her card counting skills on careless, privileged gentlemen.
Dream Casting: Laura Carmichael.

The Dude: William Blackshear. Having returned alive from the war, despite paying a high price, he feels responsible for providing for the widow of a man who died under his command.
The Rub: The only way he can earn the money he needs in enough time is by gambling - until a cunning little cardsharp fleeces him of 180 pounds.
Dream Casting: Rob James-Collier.

The Plot:
Lydia: I need to win money at cards!


Will: What a coincidence! So do I!

Will: OMG YOU CHEATING SEXY CHEATER.

Lydia: I didn't cheat, I'm just smarter than you!

Will: I FIND THAT INSANELY ATTRACTIVE. And yet I must be honourable!

Will: ARGH YOUR PROTECTOR'S A DICK, I'M OFF TO WIN YOU AT A GAME OF BILLIARDS!

Lydia: This isn't even a contest anymore.

Will: ...I'm sorry. I just think your brain is such a big, sexy organ!

Lydia: It's just too bad that you ... *takes off Will's pants* Never mind. It's clear we both have very big sexy organs.

Will and Lydia: *SexyTimes*

Will: ARGH YOUR PROTECTOR SMACKED YOU AROUND, I'M OFF TO FIGHT A DUEL!

Lydia: Seriously?! It's a good thing I can't have kids because that kind of thinking shouldn't be passed down.

Lydia: Look at you and your smart decisions!

The Word: There have often been times where I've picked up a book and it's wowed me - with its original story, or the beauty of its prose, or the passion and romance of its characters - but when I go to pick up the author's second book, the excitement and discovery are gone. The writing is stilted. In some cases, the first book did one or two things so incredibly well, that I ignored what the author did poorly, so that when I read the second book, all I notice are the things that I don't like.

But, to cut short this Ryan-Seacrest-esque suspense, it did not happen with Cecilia Grant.

Cecilia Grant floored with me with her debut novel, A Lady Awakened, a stunningly-written and deeply romantic tale about a rigidly controlled widow and a feckless charmer who find love and self-improvement with each other. I adored this book, so when Grant offered to send me a copy of A Gentleman Undone, I replied very positively in writing - but in reality I was probably performing a very immature display of "gimme gimme" grabby hands.

Our heroine, Lydia Slaughter, is the well-kept mistress of a wealthy gentleman who rescued her from a brothel. However, as a staunch realist, she knows her life of privilege is extremely limited - especially since Roanoke, her protector, failed (or intentionally declined) to bind their arrangement with a contractual promise of a settlement once they part ways. Her solution, so far, has been to accompany her protector to his genteel gaming clubs and play his cards after he dozes off, skimming the winnings. 2,000 pounds is her goal - a hefty sum that, once invested, will provide her with a modest annual independence for life.

Will Blackshear (the brother of A Lady Awakened's Martha) is employing a similar scheme - deeply scarred by his experiences and actions in the war, he hopes to acquire enough capital through gambling to settle a moral debt with the widow of one of his men. He's doing fairly well for himself until he goes up against Lydia and loses a hundred and eighty pounds. Thinking she cheated, he confronts her, only to discover something else entirely: Lydia is a mathematical genius with a photographic memory and a deft hand shuffling and dealing cards.

When Roanoke's clubmates start objecting to the impropriety of letting his mistress gamble, Lydia has to find an alternate plan. Will and Lydia decide to secretly team up and satisfy their mutual goals by taking on the seedier gaming hells together.

Following in the exalted footsteps of Loretta Chase and Rose Lerner, Cecilia Grant creates a marvellous, damaged, unconventional and sympathetic courtesan heroine with Lydia Slaughter. She enjoys sex - a lot (moreover, she enjoys sex with Roanoke, the romantic rival! Gasp!), but she's more proud of her prodigious talent with numbers and probabilities, a talent she's kept hidden until Will arrives.

Initially, Will is entranced by Lydia's mathematical skill, and Lydia is attracted to the novelty of a man admiring her head more than what's below it. Despite believing that his actions in the war have ultimately cost him his soul, Will is a deeply honourable man who tries very hard to live by his principles - while he desires Lydia, he doesn't want to join the throng of men who've misused her.

Lydia, meanwhile, has a boatload of reasons to distrust the flimsy hypocritical idea of a man's honour, and this causes a delightful and sexy cat-and-mouse game between the protagonists as each one schemes to reveal the other's vulnerabilities first. Because of this, the physical relationship between the protagonists takes a back seat to their mental and emotional development together, much like in A Lady Awakened. Although, I will tell you - it is totally worth it when they do get together.

There is, honestly, so much to love about this novel. The writing is gorgeous, evocative and lush. The characters and their actions and reactions are well-realized and genuine. This novel is unabashedly romantic while still maintaining the rough edges and small disappointments of realism, instead of tidily tying everything up with a pretty fantasy bow, the way some romances do. This isn't a novel where everyone except the Bad Guys loves and accepts the heroine unconditionally. This isn't a novel where the hero has a dark past that turns out to be an Angsty Misunderstanding. This isn't a novel where one of the protagonists turns out to be the long-lost progeny of a Duke and inherits a million pounds.

A Gentleman Undone is romance in its purest form - two interesting, intelligent, damaged, human characters who lead the reader on a beautiful journey to discover just how well their broken edges match. The world doesn't change to fit them, but their love gives them the strength to fit into the world. And I loved every page of it.
A+

You can purchase A Gentleman Undone here!