"The River King," by Alice Hoffman 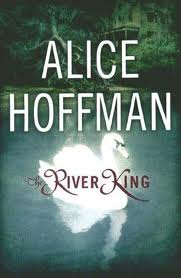 Betsy Chase: Hadden's newest instructor who is also housemother over the house where Carlin lives. Engaged to history professor Eric Herman. Longs for security and safety.

Abel Grey: A town detective who sees a chance to move past his brother's suicide by proving a local drowning victim didn't take his own life.

Joey Tosh: Abel's best friend from childhood - although both are detectives, Abel soon learns that Joey's priorities are vastly different.

The Word: I love Alice Hoffman.

So you already know this is going to be a more or less positive review. If anything, it's probably going to end up as an analysis. This is a definitely a book that took some time to figure out, which is why I love reviewing. The process of writing the review helped me understand the themes and why this book needed to hurt this much to read.

The town of Hadden, Massachusetts, has always been divided between the town and the School - specifically, the Hadden School, a prestigious and exclusive boarding academy. A century's worth of resentment has stewed between the moneyed privilege of the school and its faculty and the lower-class residents of the town who serve its students. Despite the animosity, Town and School have existed in a twisted symbiotic relationship with dark roots that have remained mostly hidden.

That is, until a rebellious, tormented Hadden student is found drowned in the river. The school is all too eager to label the death a suicide and move on - the boy wasn't wealthy, important, or particularly well-liked by either students or faculty. However, town detective Abel Grey, haunted by the memories of his brother's suicide as a teen, is unwilling to leave the case alone. And as it turns out, he's not the only one unwilling to forget: Carlin Leander, a scholarship student who befriended the victim, is riddled with guilt for choosing the popular crowd over him. Betsy Chase, the school's newest photography instructor, learns that the security that comes with the prestige of the Hadden School comes with a moral price. Helen Davis, a bitter, proud old Hadden prof, is reminded of her own moral failings.

However, this isn't a mystery novel. In fact, this novel both frustrated and fascinated me in terms of its narrative payoff. I'll help you out of your expectations right now - the story isn't about how a murderer is brought to justice or how a corrupt system is exposed. Rather, it's about how justice isn't served, about how a person - in fact, a whole bunch of people - directly and indirectly responsible for a person's death aren't caught out. In truth, the story is about how the few people who did care about that poor drowned boy come to terms with their own moralities and beliefs in the face of a system that doesn't care.

While this all sounds so deep and literary, at the same time, I wanted the bad guys to suffer. I wanted them to be punished. I wanted the truth to be revealed to everybody. And that doesn't happen. A form of retribution is enacted on the ultimate ringleader, but it seems paltry in comparison to what he did.

While that's not pleasant, it's sadly realistic. While there were many small, personal moments of victory and joy for our protagonists, ultimately, The River King is not a happy story. Sometimes the truth will not out. Sometimes a boy drowns and both a town and a school, both of which think they are superior to the other, are willing to turn their backs on him for their own personal gain.

However, while this was a thoughtful, engrossing read, it wasn't a perfect one. I thought the plot itself was unfocused and meandering, and at times was stretched too thin between too many different people. While Hoffman is normally a pro at creating rich, full characters out of brief asides and anecdotes, Betsy Chase remained a peculiarly underdeveloped character. I never really understood her motivations or her role in the story other than as someone who continually refuses Abel's advances because she's scared of love, and even that subplot seemed to resolve itself too suddenly.

But that's the thing about Alice Hoffman's writing - it's full of sudden character turns and miraculous occurrences and magical realism. Sometimes it works as all the best fairy-tale stories do, and sometimes it just seems too good to be true. Still, even in The River King it works more often than not.
B+
Posted by AnimeJune at Monday, May 14, 2012