Happy Sunday, folks! Some cool things are happening this week!

Firstly, today is my Third Twitterversary! Yup, I've been on Twitter for three years, had some great 140-character conversations, learned a lot of new things and overheard a lot of scandals. But I still can't explain how it works to my parents!

As well, I have a winner for the Catch And Release giveaway! HANNALILY come on down! And by down I mean, e-mail me your deets!

Tomorrow I'll be having my second Forever Young Adult Bookclub meeting! We'll be meeting at a pub and discussing The Disreputable History of Frankie Landau-Banks over drinks and fried foods.

Writing-wise, especially given what I wrote last week, it's actually picked up. I just made myself sit down in a place with very few distractions (in this case, Steep's Tea House with several pots and eventually a tea latte of their Choco-Chili-Chai blend) and wrote whatever I wanted. And it started to get good! I actually tried to be funny - and y'all know I can be extremely funny in my reviews, and I like being funny, so I tried to make it funny. Have I typed the word "funny" enough? I think so.

In this case, writing in a contemporary setting, I found the humour was easier. A lot of my previous works were historical or set in a fantasy world, and the humour in those types of books can be very difficult to pull off since they often rely on modern humour filtered through an historically-appropriate lens, so it often comes off as stilted or obvious.

And, as I've always found, writing requires a lot of momentum. The more I write, the easier it is to write. The more I write in one book, the easier it is to pick it up again. For instance, I've been focusing a lot on my Fantasy YA (More Than Normal) more than my Fantasy Fairy-Tale Retelling (Mouseheart), so it's easier to pick up the first novel and keep at it then my second (although it still has potential so I may return to it later).

In sad news - I've spent the last two weeks breaking in a new pair of sandals for BEA - and they broke me in instead, and by me, I mean my poor right heel. I spent most of yesterday on the internet terrifying myself with websites about Heel Spurs and Haglund's Deformity and Achilles Tendonitis and retrocalcaneal bursitis and plantar fascilitis. I'm under thirty, I'm not overweight, I walk a lot but I don't jog or run. All I did was wear new sandals for two weeks! So I'm just going to keep my feet up, ice it, take Motrin, and hope I can still walk for BEA!

I also went out and bought BOOKS this week! Gasp! With BEA almost upon me and everything! I comfort myself with the fact that neither of these authors are going to be at BEA, so I'm not doubling up - I found a 2002 edition of Alice Hoffman's Illumination Night (whoohoo!) and Kingdom of Gods by N.K. Jemisin so that I can finish her trilogy on the plane!

Speaking of planes, and BEA - I'M GOING TO BEA this year! But I'll be making a whole separate post about that so that this one doesn't go on too long!

As for the whole Wanting part - not so much this week. Sometimes there are weeks where every blog I read is talking about the same two or three books and they're just NOT what I'm interested in at all. But I did find one: 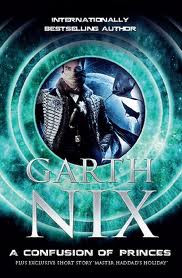 A Confusion Of Princes, by Garth Nix

Genre: Science Fiction, Possibly Science Fantasy
Cover Snark: I really like the vest!
The Story: Our hero is a Prince - but in a science-fictional world where there are 10,000 Princes fighting for supremacy! Awwwwkard.
Why I Want It? There are few storylines I like more than Arrogant Douchebags who are Brought Low and Redeemed Through Toil (see: my love for the protagonist of District Nine), which is what the Booksmugglers' review made it look like. Excellent!