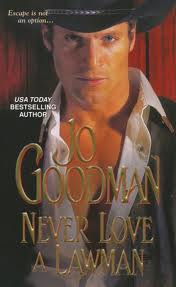 The Chick: Rachel Bailey. A seamstress living in Reidsville, Colorado, who's perfectly content to hide from her past and live an unconnected, private existence.
The Rub: Her quiet existence screeches to a halt when she learns a recently deceased man from her past has bequeathed the town's livelihood to her - but only if she marries the Sheriff.
Dream Casting: Maggie Gyllenhaal.


The Dude: Sheriff Wyatt Cooper. The quiet and exceedingly observant bachelor lawman of Reidsville, who was hired by Clinton Maddox to protect Reidsville's newest inhabitant, Rachel Bailey.
The Rub: When that protection calls for marriage, Wyatt's all in - but can he convince Rachel his reasons for marrying her are more than mere duty?
Dream Casting: Timothy Olyphant.

Rachel: OMG why is everyone in this town just so helpful and considerate? How's a girl supposed to hold on to her Dark Angsty Secrets?

Wyatt: Did somebody say secretssssss?

Rachel: I did not. And now I will engage you in a 3-page conversation in which I reveal nothing about my secret pain - except with my eyes. *angsty eyes*

Wyatt: I will have a similar conversation with you in which I secretly learn everything about you because I have super-smart detective eyes. *detective eyes* BTW, your old sugar daddy says you have to marry me or the town will die out.

Wyatt: Only he's not your sugar daddy! He's your dad's friend and you're on the run from his slimy grandson who had inappropriate designs on you!

Wyatt: You think I wouldn't notice? You were throwing me those purdy on-the-run-from-slimy-grandson-and-his-inappropriate-designs-eyes at me all damn day!

Wyatt: Watch me brilliantly solve a bank robbery because I'm a genius!

Bank Robbers: Watch me shoot you because you're an idiot!

Rachel: Guess I'll nurse you back to health.

Random Townies: By the way, the Creepy Grandson found out you were here and is on his way!

Wyatt: Sweetie, I got this.

Random Psychotic Accountant: No, I GOT THIS. *kills Evil Grandson*

The Word: Yup, another skimmer. I did make it all the way to the end of this book out of respect for Jo Goodman (whose books I love), but by page 290 I decided to focus on dialogue and not much else.

I'm beginning to think that TBR Impatience is behind the sudden ease with which I can do away with books that don't hold my interest tightly enough - I just have so many other books to read that there's simply no time to waste on books that aren't interesting.

And, sorry to say, but Never Love a Lawman didn't measure up. Don't get me wrong, this novel had a lot of good parts, but all in all, they never really added up to good enough.

Rachel Bailey has been working as a seamstress in the small Colorado mining town of Reidsville for about fifteen months after Very Bad Things forced her to leave her hometown of Sacramento, California. She's intensely private and defensive, and thus unsurprisingly has few real friends, although half the men in town are mad for her, including but not limited to the town's Sheriff of Many Talents, Wyatt Cooper.

Our Sheriff of Many Talents approaches Rachel to let her know that her Mysterious Wealthy Benefactor, railroad baron Clinton Maddox, has died. He then reveals that Maddox hired him to protect Rachel from More Very Bad Things, and now that he's dead, his last testament will do it for him. Clinton Maddox bequeathed to Rachel half of all the shares in the town's mine and the "Spur" (a 73-mile-long stretch of railroad that connects Denver to Reidsville) - if she marries Wyatt Cooper, Sheriff of Many Talents, One of Which is Protecting Ladies. If she doesn't say "I do," all that swag goes to Maddox's dastardly grandson Foster, the same man who forced Rachel to flee Sacramento.

Foster Maddox is a Villain with a capital V, and Rachel knows he'd be too busy Stalking and Harassing Innocent Ladies to keep the Spur open - and if the Spur goes, so will the town's  connection to the outside commercial world of Denver, turning Reidsville into a ghost town. Very reluctantly, she agrees to marry Wyatt, but it will be a legal marriage only and must be kept secret.

And we all know how well that works in romance novels.

The main reason I didn't engage with this story as much as other Goodman novels is that for whatever reason, I couldn't get invested in the struggles of Lawman's wordy-yet-opaque protagonists, Wyatt and Rachel. Jo Goodman's romances are traditionally very slow-paced, with lots of dialogue and normally, these elements make her novels slow, sumptuous treats. When her characters are unrealistic or unapproachable, Goodman's book becomes a slog.

Such is the case here. We have two intensely private characters who guard their secrets like pirate treasure - including from the reader. Rachel does it because she's on the run (although, for a Jo Goodman heroine, her backstory is surprisingly light), and Wyatt keeps all his cards close to the vest because it allows him to better observe people. The thing is, they spend so much time hiding and obscuring who they are and exchanging endlessly evasive banter that doesn't reveal anything about themselves, that I never really felt like I was getting to know them. Even their trademark Goodman dialogue (oh WOW so much dialogue) seemed coy and gimmicky - these are definitely people who prefer to talk around, rather than about, their problems. Because of that, I felt distant from them and from their romance.

There are some good points. Jo Goodman has a deft hand with the well-developed settings - in this case, perhaps too developed. Did I need to learn that much about gold mining and railroad politics? I did not. The scenes where Wyatt solves crimes and performs his duties as sheriff are electric (including the best scene in the novel, were Wyatt unwittingly walks into a crime in progress and discreetly backs out and arranges for backup and firepower before the criminals realize they've been made).

As it is, that's all lovely frosting on a cake that's nothing special. Never Love a Lawman has a great setting, some good action scenes, and lots of dialogue, but without extraordinary characters to empathize with, what's the point?
C+
Posted by AnimeJune at Thursday, May 10, 2012