"Thirteen Reasons Why" by Jay Asher 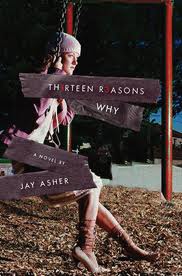 The Protagonist: Clay Jensen. He's just a regular kid, a nice guy, likes his mom and schoolwork. I guess?
The Rub: He thinks he's a nice guy until he receives a box of tapes made by a girl who recently committed suicide, tapes blaming thirteen people for her ultimate choice of self-destruction. And apparently he's one of those people.

Hannah Baker: A schoolmate of Clay's who recently committed suicide. As she details in her tapes, the varying petty slights, lies, and insults from others contributed to her depression and eventual death.

Various Other Creeps It Would Be Fairly Spoilery to Name

Angst Checklist:
The Word: Oooookay. I had this book on my TBR for a while, and was a little hesitant to pick it up (mainly due to Raych's comments on the matter), but after a coworker said she read it in a single day, I figured I'd read it and then I'd have something more to talk about in the lunchroom.

As it is, I was very conflicted by Thirteen Reasons Why. It's one of those books where it had a very good idea, but ultimately the execution and the characters behind it were lacking.

Hannah Baker is one reason for my conflicted state. She's a character, but she's dead - as we immediately learn getting into the book, she swallowed a handful of pills two weeks prior. Rather, we "hear" her voice as Clay Jensen, a shy classmate of hers, listens to the tapes she made before her death.

Clay finds the tapes on his doorstep and when he listens to them, he's horrified to learn that Hannah blames thirteen people for her suicide and she'll be naming them and their crimes against her on these tapes. One by one, these people will receive the box of tapes, and they're expected to listen to them and then pass them on to the next person on her list. If they don't, she warns, a friend of hers who's been given a copy of the tapes will release them to the public and then everyone will know what they did.

And if Clay received the box of tapes, it means that he's on Hannah's list, and also a contributor to her death.

Now, first of all, I shared Raych's reaction to Hannah's contemptuous little post-mortum: blaming people for your SUICIDE and then BLACKMAILING THEM FROM BEYOND THE GRAVE is a shitty thing to do. Especially considering that a lot of the people on the list are only guilty of being selfish petty jackasses. Yes, a couple of people on the list did genuinely awful things, but the vast majority of the people were just being jerks and at least one made a concerted effort to help.

On the one hand, that's the point. Hannah describes it as a snowball effect - how one small prank can have an expanding ripple effect that allows another person to make a cruel gesture that leads to a misunderstanding with another person that causes them to lash out, etc. etc. And as an idea, that's fantastic, and what kept me reading. I sincerely doubt people, particularly teenagers, commit suicide for just One Big Burning Reason. No, it's often a bunch of small problems that just get bigger and bigger. Thirteen Reasons Why shines when it demonstrates how one small action ("just a little joke") can have an increasingly negative impact on someone else's life.

It's fascinating to read how different solutions and resources were closed to Hannah, one by one, by selfish and petty individuals who likely had no idea how much impact their actions really had. In that sense, it's a little satisfying to know they would have to listen to the tapes and understand where their actions had led.

But still - blaming people for your suicide in an elaborately planned tape-passing plot? I found it very difficult to sympathize entirely with Hannah because, to me, the impact of her words and her tapes seemed far more harsh a punishment than many of the people on her list deserved, in my opinion. One or two, I suppose, earned the right to bear that burden, but not all of them (and certainly not the very last person on her list - that scene made my blood boil and destroyed nearly all the empathy I'd built up for her character).

At least the conflicted nature of Hannah's character is a ripe ground for discussion about morality and suicide. But what about the other narrator - Clay? The boy who listens to the tapes throughout the novel?

Let's just say, if I wanted the mains reasons why I didn't like this novel to know what I thought of them, and had a couple of cassette tapes handy, The Suicide-Blaming Plot and Clay would both receive a package from me.

Clay is a lame-ass character. I mean, he's practically a non-entity. We learn almost nothing about him throughout the entire novel. He's just there to spout exposition and cry about how it's not fair and how He and Hannah Almost Had It Allllll. By the end of the novel, I had only the barest sketch of who he was as a person, his interests and motivations, and that's such a disappointment. I mean, he considers himself a nice guy, but Hannah sent him the tapes. So he obviously screwed up somewhere. But where? The mystery of what he did serves as part of the suspense aspect of the novel.

But then. (MAJOR SPOILERS AND RAGE BELOW)


We learn that CLAY DIDN'T DO ANYTHING. He didn't hurt Hannah AT ALL! He's absolutely, completely, entirely innocent of her death and Hannah makes this very clear on the tapes. She just had an oh-so-cute crush on him, you see, so she wanted him to know her story and what happened to her. I nearly threw this book at a fucking wall when I got to this point. WHAT A COMPLETE AND UTTER COP-OUT. What a CUTESY BULLSHIT betrayal of the suspense aspect AND the central concept. The whole POINT of the novel was that most of the people on Hannah's list NEVER INTENDED to hurt her as badly as they did, or contribute to how badly her life turned out. So it would make sense that even a "nice guy" like Clay might have done something careless, or small-minded, or thoughtless, that landed him on the list. I cannot believe that the book led me on this long only to narratively bait-and-switch me and go the hearts-and-flowers Disney Prince route. Because that's who we find out Clay "is": an absolutely perfect, flawless nice guy whom no one can say anything bad about, whose shining, sterling reputation fascinated Hannah. He's so squeaky-clean he had nothing to do with her death at all. He's so squeaky-clean Hannah thought she was in love with him - but apparently not SO in love with him that SHE DIDN'T JUST *TELL* HIM POINT-BLANK AT THE BEGINNING OF THE FUCKING TAPES SO THAT HE WOULDN'T HAVE TO SPEND THE NEXT FIVE HOURS IN UTTERLY POINTLESS MISERY.


So at the end of the novel, we still have no real, solid characterization for Clay. He's pretty much a cute, inoffensive mouthpiece for the novel's central message and a bland foil for Hannah.

Without Clay, this novel might have received as high as a B grade from me. Sadly, the interesting idea of the novel was ultimately hampered by the ENORMOUS elephant-sized cop-out in terms of storytelling, and the complete lack of the narrator's character development.
C

You can purchase Thirteen Reasons Why here.