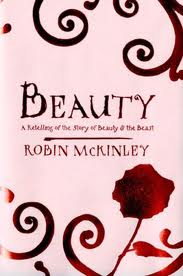 The Protagonist: Honour, a.k.a. "Beauty." The daughter of a wealthy merchant, she struggles with being brainier, less proper, and less beautiful than her two older sisters.

Her Angst: When the family fortunes suddenly wane, and her father runs afoul of an angry Beast in an enchanted castle, Beauty has to sacrifice her freedom in return for her father's life.

Grace: Beauty's older sister. Gorgeous but depressed after losing the love of her life in a shipwreck.

Gervais: A blacksmith and originally one of Beauty's father's employees. Marries Hope and proved to be of invaluable assistance when their fortunes waned.

Beast: A mysterious, furry figure who lives in an enchanted castle. Supposedly a love interest.

Lydia and Bessie: Two invisible servants who help tend to Beauty during her stay. The longer she stays at the castle, the easier it gets to hear and understand them.

Angst Checklist:
The Word: I remember when I first read this book as a young teen, I thought it was a good story, but it ripped off the 1991 Disney film Beauty and the Beast far too much. Smart-alecky enchanted servants? Beast giving Beauty a library? Sure. Right.

At least, that's what I thought until I picked up this novel again for my ReRead Rollout and realized that  it was originally published in 1978.

Ah well. For some reason (probably because Beauty and the Beast is one of my favourite fairy tales), I held onto this volume. In the interim, I've read dozens of reviews praising McKinley's books, but I never got around to buying or reading anything else of hers (except for Deerskin, which remains on my TBR, as yet unread). So I decided to reread this YA novel again and see if I could understand what all the fuss was about.

Beauty is a good book, but in the end, I may end up damning it with faint praise.

The novel starts by diving into Beauty's life and history. A solid third of the book goes by before we see a glimpse of an enchanted castle or illegally-obtained rose. Beauty (whose childhood rejection of her given name "Honour" left her with her current annoying nickname) lives with her widowed merchant father and her two beautiful sisters, Grace and Hope. Formerly wealthy, the family loses their standing in a matter of weeks when their father's fleet is devastated by storms, pirates, and other misfortunes. Forced to auction their mansion and their more expensive belongings, the family packs up and departs inland, to a small town where Hope's new husband, Gervais, has secured employment as a blacksmith. It's a decent place to live, provided one stays out of the enchanted forest nearby.

After the family spends some time adapting to their reduced circumstances, their father gets word that some of his ships miraculously returned to port, and he decides to return to the city to sell them and settle some of his affairs. Before he leaves, he asks his daughters if they'd like him to bring anything back from the city. Beauty's two sisters jokingly ask for pearls and jewels, but Beauty asks for rose seeds instead, so that she may plant them around their cottage and spruce the place up a bit.

However, their father returns burdened with impossibly wealthy gifts and an impossibly terrible choice to make. As it turns out, on his way home, he got lost in a storm and took shelter in a mysterious castle. On his way out, he thought nothing of plucking a single rose bud from the castle's miraculous garden to bring back to Beauty. However, the moment he removed it, he was confronted by a terrifying, howling Beast who demanded his death in return for the desecration of his garden and hospitality. When their father begged for his life, the Beast relented - saying he would let the man go free if his daughter Beauty came to the castle in his place, and of her own free will.

Their father has a month to decide - in one month, if Beauty does not go to the castle in the enchanted forest, the Beast will come for him instead. Beauty, against her family's wishes, stubbornly insists on meeting the Beast's challenge. When she arrives, however, she finds neither the castle, nor its Beastly inhabitant, are as frightening as they seem.

First, let's list the things I liked about the story. Robin McKinley has a lovely writing style, and I quite liked the main character of Beauty. While everything post-rose-theft follows the fairytale pretty closely, the development of Beauty and her family members are where most of McKinley's revision occurs. Beauty is not actually beautiful (at least in her own eyes), but bookish and awkward. Her two older sisters are not vain, spoiled, or frivolous and Beauty's father does not willingly offer his daughter in his own place. As Beauty deals with being under the Beast's curse, she learns to understand herself as an independent being, rather than as a sister or a daughter.

That being said, while I appreciated how McKinley took the time to develop Beauty as a character and explored the dynamics of her family and upbringing, the narrative strength and detail of the novel's first third did not carry over into the rest of the novel - i.e. the Beast part of the novel. The Beast's character is disappointingly underdeveloped - in fact, he's barely outlined at all. We never even learn his name, who he was as a person, his personality, beyond a tossed-off explanation at the very end. He's an object, a plot point, and that annoyed me and weakened the novel. How are we to understand why Beauty falls in love with him if we don't even know who he is? So he makes sad eyes at her and lets her read in his library. Okay. So what? He's also keeping her a virtual prisoner. We're going to need more than sad eyes and the occasional line uttered with heart-rending anguish to understand him as a character and how he relates to Beauty.

As well, the magic in the book isn't very well explained either. It's vague and undefined until a hasty last-minute explanation - much like the Beast. The last half of the book seemed, well, unnecessary. It follows the original fairy tale so closely (and with about as little embellishment). We already know this part of the story - why not develop it the way Beauty's history was developed? Why not explain it from the Beast's POV? Why is he dying? Why does he suddenly heal? How has he overcome his curse to remain inwardly human?

The whole point of rewriting a fairy tale is to explore it from a new angle, or to build something fresh upon the foundations of an older story to impart a new idea or message, and I feel the novel sort of gave up on this halfway through. It's not that this novel wasn't entertaining, or even that it was poorly-written. It just could have been more. It was a novel that started out strong but ultimately left me dissatisfied.
B-
Posted by AnimeJune at Sunday, December 23, 2012