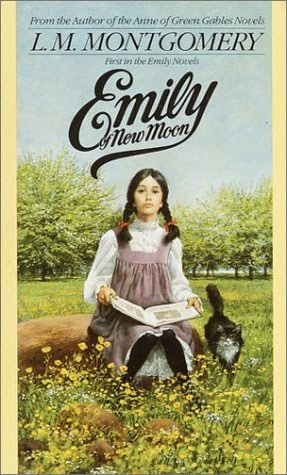 The Protagonist: Emily Starr. A precocious aspiring writer who has to go and live with her mother's family, whom she's never met, after her journalist father dies.
Her Angst: Her new family is very concerned with preserving the "Murray pride" - even if it looks likes Emily cannot possibly live up to the family name.

Aunt Elizabeth: Emily's hard and loveless aunt who insists on running New Moon Farm according to the traditions of a hundred years ago - including candles instead of lamps. Marilla Cuthbert, she ain't.

Teddy: An impoverished neighbour who lives alone with his (quite possibly insane) single mother. Wants to go to college to study art. Also wants to marry Emily.

Perry: The Murrays' impulsive but brilliant hired boy - who aspires to be premier one day. Also nurses a hardcore crush on Emily.

The Word: I've been a huge Anne of Green Gables fangirl since the first time I read it as a child. While I've been working my way through the Anne sequels, I never actually read anything else of Montgomery's. Shame on me, right? So when the Forever Young Adult book club made Emily of New Moon its pick for June, I leapt at the opportunity.

The novel starts with young Emily Starr living in blissful, oblivious poverty with her dying father. When he finally kicks the bucket, Emily learns she is to live with her mother's family - the Murrays of New Moon, the wealthy and prideful clan who disowned Emily's mother when she eloped with an impoverished journalist. The "Murray pride" prevents them from dumping Emily off at an orphanage, but they have to draw names out of a hat to decide who has to keep her. Ouch.

Emily winds up living at New Moon farm with Aunt Elizabeth (a stone hearted tyrant), Aunt Laura (kind but utterly ineffectual) and Cousin Jimmy (a gentle, artistic soul who's been mentally handicapped since he fell down a well as a child - after Elizabeth pushed him!). Despite Aunt Elizabeth's rigid rules, Emily thrives in this new environment and learns to develop her burgeoning writing talent.

In a lot of ways, Emily of New Moon is quite a bit darker and sadder than Anne of Green Gables.
Almost all the adults in this novel are kind of terrible. Emily's Aunt Elizabeth is a selfish, joyless stick with Daddy Issues. Ilse, Emily's BFF who is both a tomboy (gasp!) and an atheist (DOUBLE GASP!) has been utterly neglected by her misogynist father ever since her mother's scandalous disappearance when she was a baby.

Meanwhile, Emily's friend Teddy is afraid to own pets because his psychotic single mother will poison them if she suspects he loves them more than her. All I have to say about poor Teddy and his deranged mother is - watch out if she decides to run a motel.

Emily of New Moon has much more melodrama than Anne (scandalous dead wives, love triangles, elopements!), but a far less cohesive storyline. Neither novel has a plot, per se, and instead both follow their respective heroines from episodic adventure to episodic adventure, developing the characters as they do so. Emily felt less focused, her episodes trivial and often tedious - especially her interminable letters to her dead father. But this could also be because I didn't find Emily nearly as interesting as Anne.

I thought I would like Emily because, as previous reviewers have pointed out, she's more explicitly an artist and a writer than Anne Shirley. She's always imagining and experiencing "flashes" of inspiration, and takes comfort in secretly writing down her angst and frustration with her emotionally barren guardians.

But, well, she's also a huge Mary Sue. Anne Shirley is an imaginative oddball surrounded by (relatively) normal people whose perspectives are changed by interacting with her. Emily, conversely, is a blandly angelic artist surrounded by angsty, damaged, and far more interesting secondary characters. She's not really affected by her environment (remaining obliviously well-adjusted despite a loveless upbringing) and she doesn't affect it in turn (Aunt Elizabeth remains as high-handed as ever, despite years of Emily's puppy-dog eyes).

I had little patience for Emily's extremely mild acts of rebellion. I would much rather have read a story from Ilse's perspective - or Teddy's. Or Perry's! I loved Anne because it was just as much about Anne's flaws (her temper, her vanity, her self-absorption) as her strengths. Emily's little ticks really can't compare to Ilse's rages, or Teddy's mama drama, or even Aunt Elizabeth's repressed paternal memories.

I'll always love Anne of Green Gables, but I found Emily of New Moon utterly forgettable. She was just too precious, with none of Anne's spice or defiance. While the novel wasn't unpleasant, I couldn't really connect with Emily or invest in her storyline, and thus it wound up being a bit of a slog ending with a measles-induced psychic vision that solves a decades-long mystery. For reals!
C+
Posted by AnimeJune at Sunday, June 15, 2014