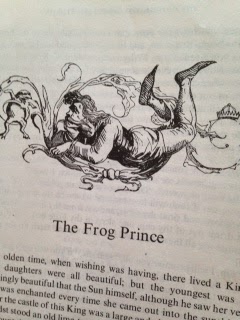 The Story: So there's this king, right? And he had a lot of daughters, but the last one was the hottest of them all. How hot? She was so hot that the freakin' Sun was in love with her, and that dude is the hottest ball around.

Okay, so this princess is hot as hell but she doesn't exactly have a lot going on, because her favourite activity is to play with her golden ball by the cool waters of the castle fountain. Some girls needlepoint. Some play with balls. Get over it.

Anyway, she accidentally drops the ball into the fountain and loses it. So she sits by the fountain and cries, because she's hot as hell, and crying by things usually solves most of her problems. And voila, her tears attract a nearby talking amphibian, who is attracted both to her tears and, presumably, her ball handling.

He offers to get her toy back, but ball-grabbing don't come cheap. He wants the works: a seat at the royal table, a first-class meal, and a slumber party (s'mores optional).

The Princess agrees, but the moment the frog retrieves her ball, she's all, "LATERS, KERMIT LOOOOOOOL" and flees on her longer, human-sized legs.

Naturally, this all comes back to bite her in the ass when the frog hops the long-ass way to her castle and demands payment, pronto. The princess whines and cries, but her sun-attracting hotness has no effect on her Kingly father (thank God). The princess is forced to get the frog a seat, and let him eat off her plate, and she waits on him hand and foot, all the while choking back bile. The frog, for his part, enjoys her humiliation immensely.

Unfortunately, when bedtime approaches, the Princess freaks the fuck out because her sheets have a thread count of a thousand and frog-slime is a bitch to get out of Egyptian cotton and she'd really rather play with her balls by herself. In a fit of rage, she actually grabs the frog and throws him against a wall.

To her surprise, he turns into a handsome prince instead of a green-brown smear on the wallpaper. Turns out he was turned into a frog by an evil witch who totally thought kiss-cures for spells were for chumps. The prince must have some weird masochist thing going on because he's totally still turned on by the hot-as-hell princess who just tried to murder him.

The wedding is arranged, and the prince is reunited with Henry, his beloved servant who locked three iron bars around his heart to keep it from breaking when the prince was frog-ified. Weird. Actually, if this is a regular thing in the prince's kingdom, it kind of explains the his kinky frog boner for pain. Anyway, the iron bars keep breaking during the carriage ride home as Henry's heart rips off The Grinch and grows three sizes at a time.

Not Suitable for Children:
Points Added for:
Points Deducted for:

And the Moral of the Story Is: Crying can solve a surprising number of problems if you're pretty.