Once Upon a Blogger: "The Wolf and the Seven Little Goats" 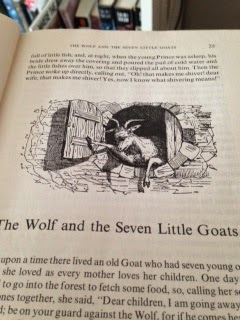 So there's this Mama Goat, see? And she's a single mum to seven little kids, which sounds like a hell of a job. Because Papa Goat is clearly a deadbeat loser, Mama Goat has to go into the forest to get some food, but before she goes, she warns her baby goats to watch out for the Wolf, best known for his scratchy voice and black feet.

This knowledge protects the kids for a while, but the Wolf catches wise to the Mama Goat's warnings and covers his feet in floury pizza dough and swallows an entire chunk of chalk to make his voice sound smoother. Despite the chalk-breath and the feet that smell like pizza, the Wolf is able to fool the little kids into letting him inside their house. Desperate to wash the taste of chalk out of his mouth, he gobbles up all of the helpless kids but the one that hid himself in the grandfather clock. I guess the Wolf never checked there because he's used to checking his time on his iPhone. Who knows.

Anyway, the Mama Goat comes back to find herself six-sevenths childless and is understandably horrified. Learning about the Wolf from the surviving kid, she rushes out and finds the Wolf sleeping off a food coma and what must be a killer case of the meat sweats. Inspired by that one time she marathon'd through the Alien trilogy and season 1 of Grey's Anatomy when the kids were asleep, she slashes open the sleeping Wolf's stomach and six still-kicking baby goats leap out like fluffy, bloody chest-bursters.

Mama Goat apparently also watched The Human Centipede, as she decides to punish the Wolf by surgically inserting enormous, jagged rocks into his abdominal cavity before sewing him back up again. The Wolf wakes up muddled, heavy, and in pain - and when he bends over a stream to drink, the rocks in his stomach cause him to lose his balance, fall in, and drown.

Points Added For:
Points Deducted For:
And the moral of the story is: Don't mess with a single mom with a Netflix subscription.

Rating: Six Devoured Kids out of Seven
Posted by AnimeJune at Monday, June 30, 2014