Once Upon a Blogger: "A Tale of One Who Travelled to Learn What Shivering Meant" 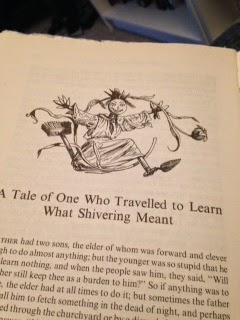 So there's this father, right? And he has two sons - a smart, cowardly one and a complete fucking idiot who is only good at, like, opening really tough jam jars and doing any errands the smart son is too chicken to do.

Finally, the father asks his idiot son what he wants out of life, and the son replies, "I want to learn how to shiver!" When a helpful pastor tries to scare the kid and winds up thrown down a flight of stairs for his trouble (for reals), the father banishes his son to his own fate.

So our none-too-bright hero wanders around looking for something to scare the pants off him (since he's too stupid to take them off by himself) and eventually hears of an enchanted castle that has killed all who sleep in it overnight. The King has promised that whoever can survive three nights in the castle will gain the princess' hand in marriage.

Our hero thinks this is a grand idea and spends three nights in a castle stabbing ghost cats, bowling with human skulls and thigh-bones, humping corpses, and beating an undead old man with an iron bar - all without the merest shiver of unease. After three days of the this, the evil spell on the castle gives up in exasperation and the moron wins the princess' hand and becomes a prince.

He's still disappointed at not learning how to shiver, until his much-smarter wife pours cold water and live fish on him.


And the moral of the story is: if you're too stupid to know when to shit your pants from terror, have some free stuff! You're clearly deserving of fame and comfort!