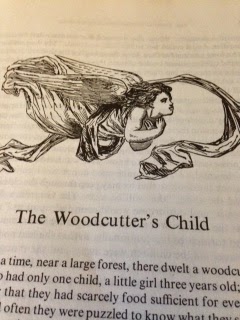 So there's this woodcutter, right? Only he's not a very good woodcutter, because he's dirt poor and can barely feed his infant daughter. Luckily for him, Angelina Jolie the Guardian Angel of All Christian Children drops by and offers to take the child off his hands and raise her in the land of Happiness.

The woodcutter goes, "Sure, why not?" and for fourteen years the girl lives in bliss and comfort.

Having apparently learned nothing from that whole Garden of Eden fiasco, the Guardian Angel leaves on a journey and the Woodcutter's Daughter does exactly what we think she's going to do. When the Guardian Angel asks about the door, she denies everything, and winds up booted out of the land of Happiness and stripped of her voice.

The Woodcutter's Daughter sleeps in a tree and eats wild berries and lets her hair grow out for a while, as one does, before a King wanders into her patch of Desolate Wilderness and falls in love with her. He wines hers, dines her, and weds her, and nine months later she gives birth to a boy.

The rumours die down eventually and she gives birth to another boy. The Guardian Angel shows up again, because she's clearly got a fever, and the only prescription is to Abduct More Children. She demands the truth about the 13th door, the Queen tells her to fuck off, Baby Number Two disappears, and the kingdom is once again super suspicious.

The Queen gets pregnant again and the Guardian Angel pops into the royal maternity ward with her baby-snatching sack over her shoulder and the usual speech, "yadda yadda, 13th door, truth will set you free, so on and so forth, baby please?" When she absconds with the Queen's daughter, the Queen's exasperated subjects accuse her of murder and condemn her to burn at the stake.

Only once the flames are licking at her toes does the Queen think, "oh for fuck's sake, I opened that damn door!" Down comes the sanctimonious serial child-stealer from the land of Happiness with the Queen's three offspring in tow.


And the moral of the story is: If at first you don't succeed, keep stealing babies.

Rating: One abducted infant out of five.
Posted by AnimeJune at Thursday, June 26, 2014