"Lady of Persuasion," by Tessa Dare 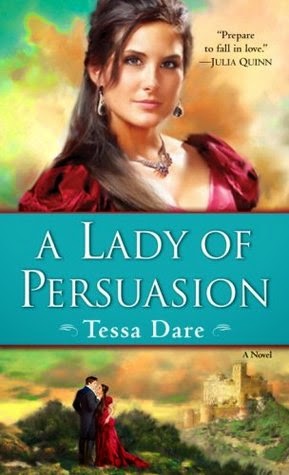 The Chick: Isabel Grayson. Her greatest desire is to marry a powerful lord and become a "lady of influence" who changes the world with her charity and good works.
The Rub: The man she falls for is a mere baronet, and a lazy one at that. Nothing a novel's worth of nagging won't fix!
Dream Casting: Minka Kelly.

The Dude: Sir Toby Aldridge. Still recovering from the emotional pain of being jilted, he seduces the sister of his enemy and winds up falling for her instead.
The Rub: Toby distrusts his ability to keep women happy - how can he make sure this wife doesn't desert him like his fiancee did?
Dream Casting: Tom Hiddleston.

Isabel: OH HAI DO YOU HAVE POWER AND MONEY I CAN EXPLOIT?

Isabel: BORED NOW - I MUST FLEE! A THREE-LEGGED PUPPY IS IN PERIL!

Isabel: I RANDOMLY AND UNCHARACTERISTICALLY ACCEPT!

Isabel: BEE TEE DUBS, WE CAN'T HAVE SUGAR OR FANCY CLOTHES OR DO ANY FUN THINGS BECAUSE ORPHANS.

Toby: Couldn't we talk this out...

Isabel: YOU COULD HAVE SAVED THREE ONE-EYED CHIMNEY SWEEPS SINCE YOU STARTED THAT FRIVOLOUS, EXPLOITATIVE SENTENCE, YOU HEARTLESS FIEND!

Isabel: BTW YOU'RE RUNNING FOR PARLIAMENT.

Toby: OMG, fine, I'll do it, just shut up already!

ISABEL: HOORAY WE ARE HAPPY IN LOVE!

The Word: Our hero, Sir Toby, is in a snit over his fiancee, Sophia, jilting him to marry a glorified pirate who is now the toast of the Ton (the events of Surrender of a Siren). Even worse - Toby's reputation was ruined by her flight when an anonymous caricaturist drew a series of cartoons depicting Toby as a degenerate rake who frightened Sophia off, and that's the version most of Society now believes.

When he sees a gorgeous woman dancing with that same glorified pirate (Benedict Grayson), Toby swoops in and puts the moves on her, only to find out she's Isabel Grayson, Benedict's sister. He toys with her a bit - although he quickly gives up on designs to seduce her in revenge, because he's not an asshole - but winds up impulsively proposing marriage. To his surprise, Isabel excepts.

Toby's a sweetheart. He's a gadfly layabout beta male who's still suffering from crippling insecurity over Sophia's jilting. He's determined to make his engagement and eventual marriage to Isabel work, if only to prove that he can win a woman without losing her. In the process, he makes a lot of promises he doesn't really mean, promises that come back to bite him in the ass once he realizes he's actually in love with Isabel and disappointing her is no longer an option.

The only problem? Isabel is a selfish, sanctimonious, insufferable little martyr who'll only marry a man in (or planning to run for) Parliament - so she can use him as a tool to further her own designs. Her devotion to charities and Righteous Works borders on obsession (she can't eat sugar without thinking of the slaaaaves! The slaaaaves!), she has very little regard for the feelings of the people around her, and she'll piously condemn anything that doesn't have a strictly utilitarian use as being a Frivolous Sin Bought with the Blood of Innocents. Flavoured ice is a sin! Walking sticks are a sin! The Elgin Marbles are a sin! You could have helped starving orphans with that money!

Isabel's unpleasantness would have been easier to take if the novel had been even a little self-aware of what a self-righteous, mercenary, hypocritical pill she is. She's appalled once she discovers Toby is "not a lord, but a sir." Once they're married, she pushes Toby into running for Parliament so that she can become a "lady of influence." It never occurs to her to ask or care if Toby actually wants to be an MP.

But instead, the novel paints Isabel as this Paragon of Innocence, Nobility, and Virtue and Toby spends the rest of the book proving he's "worthy" of her. Toby eventually surrenders and becomes an MP - and it's definitely a capitulation, he still expresses no talent or interest in politics - instead of discovering his own passion. Isabel compromises nothing in her relationship with Toby. It's not really an equal relationship, so it didn't really work.

Man, I could have sponsored a Third World Child for months on the money I spent on this book! Months!
C
Posted by AnimeJune at Wednesday, June 18, 2014