Once Upon a Blogger: "The Cat and the Mouse in Partnership" 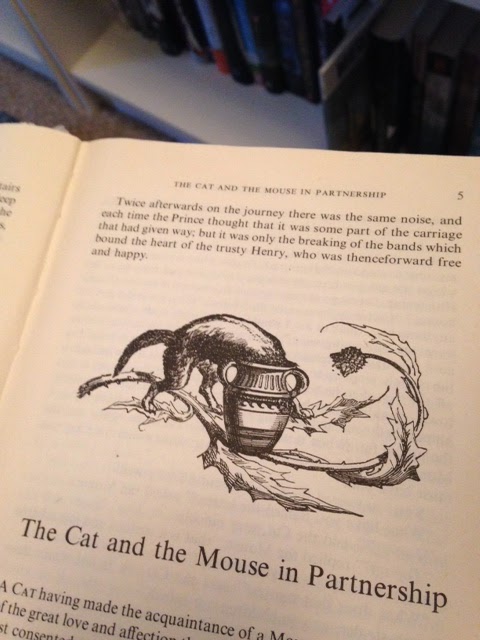 The Story: So there's this Cat, right? And he seduces this Mouse into shacking up with him and they're as Tina-and-Ike a couple as you would expect.

Anyway, in order to spend the upcoming winter living in comfort (and, presumably, inter-species SIN), the two of them procure a pot of fat and hide it beneath the organ in a church, with the intent of saving it for winter.

The Cat, unsurprisingly, is kind of a dick, and so he tells his little rodent hoochie mama that he's been asked to stand as godfather for one of his relatives' kittens. While the Mouse stays at home and irons his Cat-underwear and rakes out his litterbox, the Cat slips off to the church to eat a portion of the fat.  When he comes back, he tells the Mouse the kitten was named "Top-Off."

"Well at least it's not Apple," says the Mouse.

The Cat plays the godfather card two more times, and the Mouse never questions her feline boyfriend's sudden Catholicism nor the likelihood of cats supporting a sacrament that involves dunking them in water. She does get suspicious, however, that the godkittens wind up named "Half-Out" and "All-Out."

The catpoop hits the fan when winter hits, and the Mouse goes to recover the fat only to discover the Cat has eaten all of it. The Mouse calling the Cat on his bullshit is a bridge too far, however, and he springs on her and eats her.

Which, frankly, was the inevitable outcome from the star.


And the moral of the story is: You can't trust the pussy.

Rating: Three pots of fat out of five.
Posted by AnimeJune at Wednesday, June 25, 2014