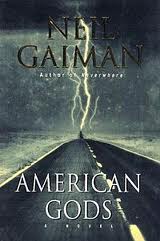 The Protagonist: Shadow. When he's released from prison mere days after his wife's sudden death, he impulsively accepts a job from a mysterious personage named Wednesday.
The Rub: He soon departs on the adventure of a lifetime when he learns that Wednesday is actually a god, adrift in a nation bereft of worshipers, who wants to find other abandoned gods in America and band together.

Wednesday: The American incarnation of the Norse god Odin. Believes that the Internet, the Media, and Television (the new gods that Americans believe in) are trying to eradicate the rest of his kind, so he needs to convince his brethren to stand up and defend themselves.

Laura: Shadow's dead wife, who is inconveniently resurrected by a magic coin. She wants to help Shadow as well as make up for her mistakes during their marriage, but being undead has its disadvantages.

Mr. Nancy: An ally of Wednesday's, and the American incarnation of the African trickster god Anansi.

Jacquel and Mr. Ibis: Two small-town morticians who are the American incarnations of the Egyptian gods of the dead, Thoth and Anubis.

Czernobog: An elderly Slavic god who beats Shadow at a game of checkers, thereby winning the right to smack him over the head with his sledgehammer - but he'll wait for the right time to do it.

The Word: In the world of Science Fiction and Fantasy Nerdery, Neil Gaiman is Kind Of A Big Deal.

Me, I've kind of rested on the very far fringes of Neil Gaiman fandom. I enjoyed Coraline and Stardust and most especially 1602 (where all the Marvel superheroes were transported to Elizabethan England). I've got a couple of his story collections on my TBR. But I never read Sandman, or saw his episodes of Doctor Who. He's been an author I've enjoyed, but not enough to seek out his works.

I had to be nudged by my bookclub to read American Gods, and it kind of cemented for me why I've never really become a huge fan.

For me, American Gods was pleasant - but more because the act of reading is pleasant than because I wholly enjoyed the book itself. Kind of like how I enjoy going to movies even when the movie is blah because I like the seats and the people and the popcorn.

Our hero, Shadow, is only days away from being released from a three-year prison sentence when he's informed by the warden that his beloved wife, Laura, has died in a car crash. Numb and empty, he leaves prison with no home to return to, so when he's offered a job by a mysterious stranger named Wednesday, he accepts because, well, why the hell not? What else does he have going on?

Wednesday then reveals he is a god (Odin, to be exact), and spends the rest of the book dragging Shadow all over America on his quest to find the other famous gods and monsters of myth and bind them to his cause. In this book, gods are creatures who derive their power from the belief of their worshipers, but the gods Shadow and Wednesday encounter are weak, aging, and petty. Carried across the sea to America in the minds of devout immigrants and explorers, only to be abandoned by their disbelieving descendants, the majority of these incarnations live a shabby existence, scavenging and conning to survive.

Worse, there are new gods now, shiny and powerful gods, the gods of TV and Internet and Automobiles, and they don't like sharing the stage with the over-the-hill old-school deities that remain. In fact, according to Wednesday, these new gods of computers and consumerism have already started hunting down and eradicating the old gods one by one. Wednesday thinks it's time the old gods banded together to defend themselves, but he has an uphill battle - few of his compatriots are willing to risk what little comfort they have left to likely die in a suicidal war.

It's an interesting concept, even if I felt thoroughly beaten over the head with the repetitive "humans brought us here and then they forgot about us, those ungrateful bastards" schtick. The thing is, this novel is more of an experience than a story. At times I often felt like a child strapped into one of those little train rides that are meant to give controlled tours of a certain place - the story leads Shadow on a very linear, daisy-chain, and episodic journey to see random places and people that could fall under the "Gods Abandoned By Selfish Americans" category, with the occasional interlude into past tales of screwed-over gods. Again, by the end of the novel, it all felt repetitive - Shadow meets a watered-down version of a famous deity, we get a little snippet of what modern life is like for them, Wednesday asks for their allegiance, the god says no, and rinse and repeat.

And just like that child stuck on that train ride, I didn't feel involved or particularly invested in anything that I was seeing. It felt overt and manipulative - I felt like I was being shown a world rather than exploring a world.

As a protagonist, Shadow is a very passive character for the majority of the novel, although that does eventually change (very) late in the game. He's incredibly laid back and just accepts everything that comes without any real ambition or motivation - which makes it easier for the story to progress but renders him an incredibly dull and opaque character. And while we meet other characters along the way, they are only briefly present and sketchily drawn. Shadow and Wednesday are really the only solid characters we have, and Wednesday spends a lot of the book being somewhere else, and probably doing more important and interesting things that we never get to see.

And of course, since this is written by The Neil Gaiman, I initially felt like a little bit of a Philistine for "obviously not getting it," and by "it" I mean the brilliant genius of this novel that everyone else seems to see. But the fact of the matter is, to me, this novel was boring and scattered and all over the place and I didn't care about or get anything out of it. For me to enjoy a novel, the protagonist needs to care about something and I need to care about the character, and I got neither of these things from American Gods.
C