So after a very satisfying sleep, I woke up bright and early on Wednesday Morning for the Children's Book and Author Breakfast. But first! I had to get in line for autograph tickets, since John Green was also signing that day and was a ticketed author! 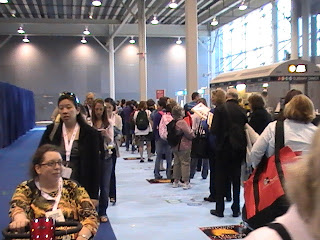 Don't be fooled - I'm at the back of this line, which went beyond the camera frame and doubled back. Thankfully, I still got a ticket in time. Then I rushed to the event center for the breakfast. When I first learned who was speaking at this breakfast, I used some money I'd saved to buy a Reserved Premium Round Table Seating ticket. I'm a Gleek, and I'm becoming a bigger fan of John Green with every vlogbrothers post. And of course Lois Lowry's The Giver made me cry.

When I arrived at the center, I showed my ticket, and one of the organizers personally led me to the very front of the center, to one of the five red-tableclothed tables directly in front of the stage. AWESOME! Also, there was very impressive swag on all of the chairs: 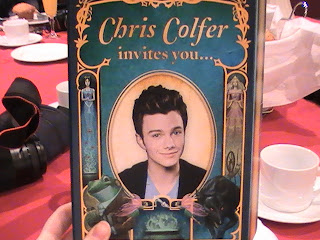 A special boxed copy of Chris Colfer's The Land of Stories... 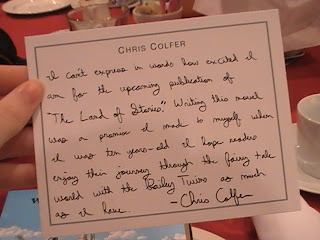 ...accompanied by a handwritten (albeit many-times photocopied) note from Chris Colfer... 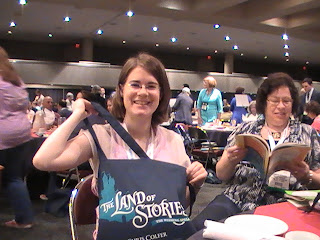 ...and a gorgeous totebag!

It also came with a Land of Stories poster, a copy of John Green's The Fault In Our Stars (which I gave away to another attendee as I already had a lovely copy) and an ARC of Lois Lowry's Son, the last book in the Giver series (which wasn't even present at her later signing - people who lined up for that got a signed cover flat).

After that came the speeches. 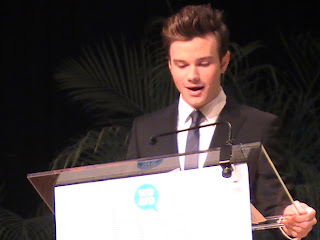 Chris Colfer emceed the event and he was very charming. Through his speech, he related how The Land of Stories was very much a labour of love, not a ghost-written "celebrity novel." It was actually a project on which he's worked on since he was ten (he joked that reporters responded, "So you've been working on this for five whole years!"). He showed us a picture he'd drawn of the Land of Stories in third grade as well as a map he'd designed in junior high. 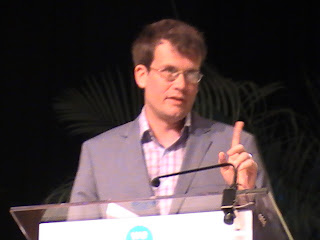 Next was John Green, who started in by saying he'd looked up the "Chris Colfer" tag on Tumblr to find something silly to embarrass him with ..."only I found fanfiction..." *awkward pause* "Of the two us."

After that, however, he gave a truly inspiring speech about how books don't need to be enhanced or have funny videos or "behind the scenes" details. He stated how reading takes focus and contemplation, and how everyone here is already doing what they're good at doing, and that we don't need to try and copy the techniques of people who work in other entertainment mediums because books engage the attention span in a fundamentally different way. 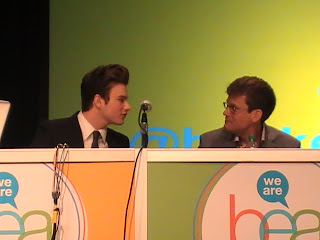 After that, Chris Colfer came up and jokingly apologized, admitting that he had written the nefarious John Green/Chris Colfer fanfic, and had titled it "50 Shades of Green."

After that came Lois Lowry, who made me cry again when she revealed that a lot of her relationship with her (now tragically deceased) soldier son inspired The Giver and most especially, the final book, Son. She got a standing ovation, and boy did she deserve it!

And then there was a final speech by artist and children's book author Kadir Nelson who painted the glorious illustrations for I Have a Dream, a children's book recreation of Dr. Martin Luther King Jr's famous speech.

After that came more BEA and MORE BOOKS! I made it back to the Simon and Schuster booth just in time to snag an ARC of The Blessed, which has been on my radar since Kirkus' Big BEA Book review thingie arrived in my inbox. I'm a born and raised Catholic, and I've always loved the saints (even though my particular patron, St. Paul [writers, journalists, and bloggers] can be a mite creepy), and the story of three girls who embody three martyred saints, including St. Cecelia (patron saint of music), one of my personal faves? Yes!

As well, I actually ran into John Green in person on the BEA floor. I got to shake his hand and tell him how much I liked The Fault In Our Stars and even sniffled over it ("Ah, the single tear," he said). I sincerely hope I came across as a Mature, Composed Fan and not a very silly and loud fan. 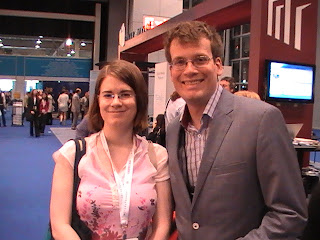 Then I got in line for John Green's signing, when a woman came up behind me and put an envelope in my hand. She said it was her 15-year-old daughter's fan letter that she'd wanted to deliver to John Green. The woman said she'd also wanted to get John Green to sign a book for her daughter, since her daughter is an enormous fan who's read all of his work. Unfortunately, she hadn't been able to get a ticket. John Green was a ticketed author because he is understandably very popular and there was a limited amount of books - so only the people who waited in line for a ticket would get a signed book.

Now, I figured - I'd gotten to see him at the breakfast. And I'd actually gotten to meet him in person and tell him how much I liked his work (with photographic evidence), which was what I'd been looking to do when I went to the signing anyway. So I gave her my ticket. 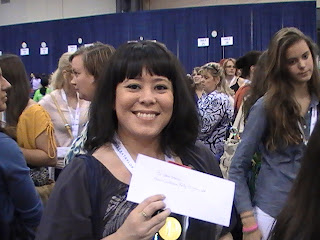 And as it turns out, Karma paid me back twofold - firstly, because as I'll relate tomorrow, I managed to be at the right place and time for the unveiling of the new cover for An Abundance of Katherines and received a signed copy of it then, and secondly, because skipping the line for John Green's signing gave me time to get in line for Chris Colfer's signing.

Even though I arrived half an hour early, I was 104th in line! Crazy! Once it got moving, though, it really got moving. In the five seconds I was face to face with him, I told him I'd loved his breakfast speech and he said thank you. 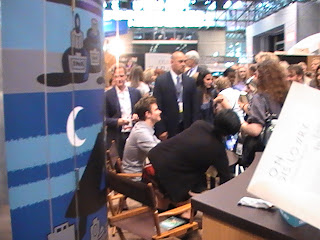 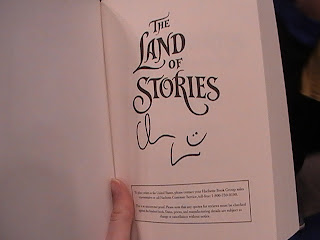 After that, I pretty much just wandered around for a while more. It's interesting - Book Expo America doesn't really have that big of a social element. I mean, it's fun to talk to people in line and exchange business cards (and I'll definitely be revisiting and e-mailing the people I met), but I felt I spent a lot of time by myself. I mean, it's so big and there are so many people, that a lot of the social meet ups are sort of "ships passing in the night" stuff. Most of the socializing came from the Blogger conference, and I'd missed half of that.

Although I did spend some quality time discussing just that with Jessica from Read React Review while in the line at MacMillan for Eve and Adam. She said that she'd heard the reason there was so much YA stuff at Book Expo is that the YA genre doesn't have its own major conference yet. There are writers' cons for Fantasy, Sci-Fi, Romance, Mystery - and yet not for YA. There's a lot of cross-promoting because YA can fall into the categories of sci-fi and romance, for instance, but no conference specifically for that genre.

We also both expressed our disappointment in the BEA Book Bloggers conference. If I decide to go next year (and that's still a big, major if), I might go to the UnCon instead.

All in all, Wednesday was a much lower-key day. All the frenetic running around, gawking, networking (giving my card and introducing myself as a blogger to publishers) and discovery happened on Tuesday. I felt separated from a lot of it - I'm not really in the industry, so I felt like more of a spectator. I left early to rest up before my Broadway show. 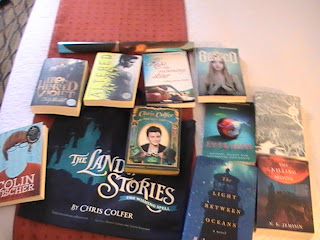 While I wanted to join Katiebabs and Jessica for dinner, the insane New York traffic wouldn't allow it - I needed to have supper and get back in time to see the show, so I had the cute, flirty concierge suggest an Italian restaurant, which I ended up walking to after my (violent, profanity-spewing) cab driver landed us in a traffic gridlock.

It was called Becco, and it was a lovely restaurant. It was cozy, with warm colours, gold and red wall paper, well-lit without being too bright, with very friendly and attentive waiters. They set me up at a table for one, with a bread basket and a bowl of olives, and another bowl of olive oil-drizzled vegetable mash that was astonishingly good. I had a delicious Caesar salad and ordered the lamb - I wasn't able to finish all of it but I just wanted to mention it because while I was there, I had such a great time. Everything was delicious and all the staff were so attentive. It was nice to just sit there and people watch.

Then off I went to see Nice Work If You Can Get It - starring Matthew Broderick! It was wonderful and cheered me up immensely - although it was no Book of Mormon. The live performance and the jokes and physical comedy made this show - but the songs, while toe-tapping, well-performed, and appropriate for the show, were not at all memorable despite being apparently timeless Gershwin numbers

And then more sleep! More to come later!
Posted by AnimeJune at Saturday, June 09, 2012