"The Miseducation of Cameron Post," by Emily M. Danforth 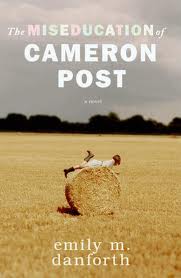 The Protagonist: Cameron Post. When her parents die on the same day she kisses a girl, she subconsciously wonders if she somehow caused their deaths, even as she grows to explore what it means to be attracted to girls in small-town 1990s Montana.
Her Angst: Her guardian, her extremely religious Aunt Ruth, believes homosexuality is a sin and a sickness and when Cameron's sexuality comes to light, she feels forced to take drastic measures.

Irene Klausen: Cameron's best friend and first kiss - their relationship is dealt a decisive blow after Cameron's parents are killed.

Jamie: Cameron's stoner friend, who is awesome, but might have a crush on her. I honestly wish we saw more of him.

Coley Taylor: A girl with whom Cameron falls in love, who is nevertheless too restricted by her religious beliefs to enter into an honest same-sex relationship.

Reverend Rick: One of the leaders of God's Promise, a private school dedicated to helping teenagers overcome their unhealthy homosexual desires. A professed "ex-gay" himself, he sincerely believes he's helping teenagers become closer to God.

Lydia: Rick's aunt, and the other leader of God's Promise. A cruel, cold, hateful bigot with no sense of empathy or boundaries. Has a special corner of Hell reserved for her.

Adam Red Eagle: One of Cameron's classmates at God's Promise, forced to go by his homophobic, political-minded father, although his mother, of the Lakota tribe, believes he's a winkte, or "two-souls person."

Jane Fonda: Another rebellious God's Promise classmate, who was raised in a commune, grows her own weed and stores it in a hidden compartment in her prosthetic leg. I couldn't make this stuff up.

Angst Checklist:
The Word: The Miseducation of Cameron Post is an example of a novel I haven't read it quite a while: a bildungsroman - a coming-of-age story.

But AnimeJune, aren't most YA novels coming-of-age?

In a sense, but I've found that most YA novels focus on a particular, narrow period of time in a teenager's life where something life-changing happens - a single summer, or year of school. My favourite bildungsroman, David Copperfield by Charles Dickens, follows the main character from miserable childhood to successful adulthood, with all the dramas in between. Instead of spanning a particular period of time or event, The Miseducation of Cameron Post follows Cameron from age twelve to seventeen, with a linear recounting of her interactions and discoveries.

Still, The Miseducation does have a theme - that of Cameron's developing sexual identity in small-town Montana, told in three parts. The novel opens as twelve-year-old Cameron discovers she has feelings for her best friend, Irene. The two kiss at a sleepover while Cameron's parents are on vacation. Later that very night, Cameron learns her mum and dad have been killed in a car accident, and her first reaction is relief, that they didn't find out, that they'd never find out. Her subsequent guilt and horror at this response strongly influences her growing understanding of her own desires and ultimately severs her friendship with Irene.

Cameron then acquires the guardianship of her born-again Christian aunt Ruth, and as she grows into a teenager (the novel's second part), she starts exploring her sexuality as well as its social context. On one end of the spectrum, she's influenced by her aunt's church, Gates of Praise, and the Christian youth group she is forced to join. On the other end, she has her friend and sometimes-girlfriend Lindsay, a city girl from Seattle, who inundates Cameron with ideas about lesbian culture and Gay Pride and gender constructs - subjects that interest but also intimidate Cameron, who only feels ready to explore what being a lesbian means to her personally.

She also falls in love with another girl in her class, named Coley, and as she moves to act on what seems like a reciprocated attraction, the book moves into its third and final part, where Cameron must hold true to her identity against serious and insidious opposition. When Coley confesses to her family that Cameron "seduced" her in a moment of weakness, Aunt Ruth packs Cameron off to God's Promise, a private ultra-Christian school for curing teenagers of their "sexual brokenness."

I like books that make me happy - but I also enjoy books that make me angry. Books that make me feel anything in such a powerful way are always preferable to books that don't touch me at all. I'll admit, I enjoyed the first two parts of this novel, but I never felt truly emotionally invested until the third part. The third part is excruciating to read - the methods used to try and "cure" these kids are infuriating. For instance, the teachers often conclude that behaviours that don't fit outdated and extremely cliched notions of gender are responsible for homosexuality - boys being too close to their mothers, girls liking sports, etc.

It seemed to me that the first two parts of this book were simply an elaborate and detailed lead-in to Cameron's struggles at God's Promise. The first two parts give Cameron the experience and the personal knowledge to understand and combat what's being done at God's Promise, to come fully into an understanding of her identity - and the validity of her identity - during a period of extreme struggle, and this was extremely powerful to read.

Part of what made that powerful was the humanity of the characters - well, most of them. The majority of the characters are given enough angles and layers that we can understand them, even care about and empathize with them, even when they're antagonists. Cameron's Aunt Ruth is never demonized, and after 200 pages of her interactions with Cameron we can understand her decisions and where they come from, even if they're short-sighted and awful.

The character who stood out the most for me was Reverend Rick, the young, handsome pastor who helps run God's Promise. The other leader, Lydia, is a loathsome bigot inside and out, but Rick genuinely cares about the kids and what he's doing and what he thinks he's helping them to do. Emily Danforth skilfully manages to render him sympathetic without rendering his actions sympathetic.

I also enjoyed The Miseducation of Cameron Post because it's a very atmospheric novel. Yes, at times (parts one and two) it's slow-moving, but it pays a lot of attention to Cameron's physical and social environment. I got a real sense of her small town and the types of people in it, the pervasive religious and farming culture, as well as how much Cameron loves her town. Yes, there's a part of her that knows she will eventually have to leave for greener (and more gay-friendly) pastures, but the story also conveys just how much of herself is bound up in this town.

That being said, I had a few niggles. The novel introduces a few plot points as if they are significant (like Cameron's mother's friend Margot, or Ruth's chronic illness), only to drop them without dealing with them. The character of Margot puzzled me, in particular, since her one appearance in the book left such a deep impression on Cameron, but it was never really explained.

Despite these quibbles, and the uneven pacing, The Miseducation of Cameron Post is an involving, thought-provoking novel about the importance of personal identity.
A-

You can purchase The Miseducation Of Cameron Post here.