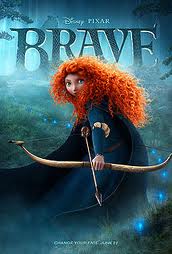 Pixar's Brave is an excellent example of a movie that improved in my mind as I reviewed it. My first reaction after watching this movie was disappointment. While it was a good movie when compared to other movies in general, as a Pixar film it didn't seem to measure up. It seemed - predictable. Most other Pixar films sweep you along on an exploratory journey of astoundingly original worlds and ideas. Monsters. Bugs. Toys. Rats in Paris.

This story dealt with - princesses with red hair who don't follow society's rules. Didn't I watch this one before?

However, after letting the movie sink in and really analysing the aspects of the plot, I realized it simply had a different focus. While Pixar movies, in general, are idea- or setting-based, Brave is a personal, character- and emotion-based story. This may seem like a Disney Princess movie, and you would be right - but it's a Disney Princess movie as done by Pixar, and the result is a subtly different creature.

In this kingdom, there are four major clans, and tradition dictates that the princess of a clan must marry a prince of one of the others, provided he's able to win her hand through a series of competitions. Merida is NOT happy with this turn of events at all, and her defiance of tradition sparks a terrible argument with her mother, the queen. When she accidentally happens upon a witch's cottage, Merida decides the only way to change her fate is to muck about with someone else's - and she buys an enchanted cake intended to change her mother's mind about marriage.

To absolutely no one's surprise, this plan backfires spectacularly when the spell winds up turning her mother into a bear. With only two days before the spell becomes permanent, Merida and her now-ursine mother must team up and find out how to mend the rift between them.

The movie wins most of my appreciation for the following three points:

1. The story not only has a female protagonist, but a plot that is centered entirely around the relationship between two women.
A princess with a surviving mother figure is already a rare thing in the Disney canon, but for a princess to have a significant relationship with her mother, and for it to be the main focus of the film, is entirely unheard of. Yes, Mulan, Tatiana, and Rapunzel all had mums - but they were always relegated to the background.

In Brave, the film is all about how Merida and her mother the Queen come to terms with their differences in perspective. Merida is a classic tomboy skilled at horseback riding, archery, and outdoorsmanship, and the queen is an exceedingly proper politician and diplomat who clearly means for Merida to follow in her footsteps, if only she would give up her pointless and unladylike interests.

Once the spell deprives the queen of her voice and her agency, and she must rely on Merida's aid, the queen comes to learn that her daughter's unorthodox passions and talents are valid and useful aspects of her personality. Meanwhile, Merida must accept how her selfish actions can have repercussions, and just how important her mother is to her life. The film explores both viewpoints equally and gives both sides equal weight - I especially liked how the film takes the time to explain why Merida's betrothal is such a political necessity.

2. The heroine's actions have consequences - and she learns the importance of those consequences.
In this instance, Merida edges out past The Little Mermaid's Ariel. Ariel is also a rebellious princess character who runs afoul of a witch when she tries to change her fate - but she never really grows up or learns her lesson by the end of the movie. She abandons her family and sells her soul for a nice pair of gams and it's all fun and games until Ursula comes to collect. Her powerful daddy and resourceful boyfriend are fortunately on hand to bail her out, and at the end of the movie she's got her gams, her dude, and her father's approval and absolutely no understanding of how her own actions endangered all three. Let's face it, Ariel got lucky.

Merida is a character cut from the same redheaded cloth as Ariel, but in the film she's forced to come face to furry face with the consequences of her actions as she comes perilously close to losing her mother forever. It's a message both good and bad - she learns her words and actions have power, but they also have the power to affect other people's lives in a negative way.

3. There is NO romantic subplot at all. NONE.
You read that right. There is no handsome prince. There is no platonic male friend who becomes something more. The closest thing to a male main character is Merida's father and her three baby brothers. I seriously wish screenwriters would realize the storytelling time they could save if they just stopped trying to wedge a romance into a story that doesn't need one. Brave does not need a romance and I never noticed its absence.

That being said, did the writers use their time wisely? No. I felt the pacing of Brave was off - Merida's mum doesn't turn into a bear until nearly half the movie is gone thanks to filler scenes and overelaborate narrative setup.  I felt the movie would have been more effective if the transformation had come sooner, allowing for more scenes of Merida and her mother bonding.

Also ... well, although the film does inject refreshing elements into the narrative, it's still a familiar narrative (girl doesn't want to marry, constrained by society) in a familiar setting (Medieval Western Kingdom). I don't know - Pixar films usually find a way to offer something new, from an angle or setting or story we've never thought of before, and so Brave felt a little too familiar.