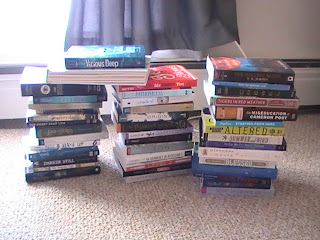 Soooo.... I got a lot of books at Book Expo America. I really did try to only pick up books that I actually wanted or sounded interesting, and I think I was mostly successful. Mostly. Either way, I managed to successfully pack everything into my two pieces of luggage without incurring overweight fees so I'm good on that score. Here's the list: