"Throne of Jade," by Naomi Novik 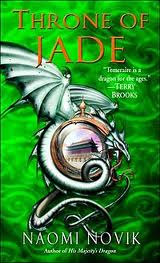 The Protagonist: Captain William Laurence. He recently helped win a significant victory for Britain and her allies with the help of Temeraire, the dragon whose egg he rightfully won in a naval battle with a French frigate.
The Rub: Too bad the Chinese are now claiming that the English stole Temeraire (an exceedingly rare Celestial dragon) and are now demanding him back.

Prince Yongxing: The arrogant third son of the Chinese Emperor, he is horrified by the barbaric way the English treat dragons and believes that Temeraire (a rare dragon breed reserved for companionship with royalty) has been taken advantage of by his backwoods peasant of a rider, Laurence.

Hammond: A young diplomat assigned to Temeraire's journey to China who initially believes a peaceful alliance between Britain and China is more important than one dragon's feelings - a mindset that earns him the intense distrust and dislike of Laurence.

Liu Bao: A corpulent companion to the Prince who befriends Laurence on the trip to China, thanks to Laurence's helpful seasickness remedy.

Sun Kai: Another companion of the Prince - albeit one with far more dubious intentions.

1 Bid for the Throne

The Word: It took me a while to get around all my other reads and find my way back to Naomi Novik's Napoleonic dragon series, but I don't regret it. I read His Majesty's Dragon way back in 2010, and quite enjoyed the original take on introducing dragons into the Napoleonic war as well as English culture, and discovering the epic bromance between former Navy Captain William Laurence and his beloved dragon, Temeraire.

At the end of His Majesty's Dragon, experts were finally able to identify Temeraire (whose egg was discovered aboard a French ship as a gift to Napoleon) as a Chinese Celestial - an exceedingly rare breed of dragon that's never been seen outside of China.

And, as it turns out, China is not happy. At the beginning of Throne of Jade, a Chinese delegation, headed by Prince Yongxing, arrives in England and demands Temeraire back. To Laurence's horror, his superiors are too desirous of maintaining positive ties to China to outright refuse the Prince's demands, and Laurence is eventually ordered to give up Temeraire.

Temeraire, however, has a mind of his own, and after he makes his attachment to Laurence violently known, the Chinese very reluctantly allow Laurence to accompany Temeraire back to China - but only to keep Temeraire from an outright mutiny. Laurence hopes their newly-bought time will help him come up with a way to keep his beloved dragon once and for all, but Prince Yongxing appears implacable. He believes English dragons are treated little better than cattle and that Laurence is an upstart peasant.

Once again, I found myself exceedingly entertained by the Novik's marvellous and extremely clever worldbuilding - in this case, exploring everything from the types of ships designed to carry dragons to the different ways in which cultures deal with dragons.

The notion of dragon culture is an important theme in Throne of Jade and an interesting thorn in Laurence and Temeraire's relationship. A loyal Englishman, Laurence is accustomed to believing that the English are superior in all things, including dragon rearing - until he discovers that in China, dragons are taught to read, are served cooked food, are allowed to choose their companions, can own property, and can live peacefully amidst humans - whereas British dragons eat cow off the hoof and are restricted to isolated coverts to avoid terrifying the populace. Temeraire finds himself enjoying the Chinese way - even as he feels terribly guilty about it, and Laurence is forced to wonder whether trying to keep Temeraire as a British dragon is selfish.

One of the best aspects of these books is how the author never allows the exterior, magical conflict to overpower the internal conflict that her characters undergo. Laurence is a veritable prince of a man, although he is allowed to be more of an ignorant ass in this book than he was in His Majesty's Dragon, which is a relief. Temeraire, of course, is a very young dragon who is always growing and always changing and, more importantly, always thinking - increasingly about how dragons are treated, sometimes unfairly.

On the other hand, the internal conflict does overpower the external conflict on several occasions, resulting in very slow pacing. There isn't a whole lot of action in this book, and I'll admit the story dragged in places. However, the atmosphere and the wording and the worldbuilding and the small details and the dialogue are so very enjoyable that reading Throne of Jade is always pleasant, if not riveting. I highly recommend Throne of Jade, although it would be better to read His Majesty's Dragon first.

You can purchase Throne of Jade here.