"The Wild Marquis," by Miranda Neville 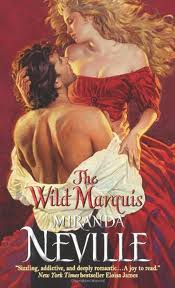 The Chick: Juliana Merton. A bookseller whose business tanked once when her husband died and her customers decided a woman couldn't possibly understand enough about rare books.
The Rub: When a devilishly handsome rakehell asks her to represent him in a book auction, she knows she'll earn a serious chunk of change, but can she really put valuable books in the hands of someone society believes is frivolous and selfish?
Dream Casting: A young Reese Witherspoon.

The Dude: John Godfrey, the Marquis of Chase, a.k.a. "Cain." Banished from his fanatically religious family as a teenager, the notorious aristocrat has spent years wearing his coal-black reputation with defiant pride.
The Rub: This pride comes back to bite him in the ass when he sees an opportunity to reconcile with his family, but his peers aren't willing to take his "reformation" seriously - but maybe a shapely book seller could help him win back one of his family's prized heirlooms.
Dream Casting: Matthew Goode.


Cain: I need to buy back my family's favourite book!

Juliana: I need enough money to buy my mother's Shakespeares!

Cain and Juliana: We should team up! It's perfect!

Cain: I may also need to be taken seriously as a gentleman to protect my sister.

Juliana: I need to know who my real father is.

Juliana: I need to know why my husband was murdered.

Cain: I need a woman who understands that I'm actually NOT a dirty incestuous pervert, but a dude who loves women - in the respectful and non-penis-touching way...

Juliana: I need a man who respects me because I'm AWESOMELY SKILLED and not just because I'm also super hot...

Deranged Villain: Meanwhile I need to murder both of you!

Cain: No thank you!

Cain: We need to get married!

The Word: I've had the very lovely opportunity to have met Miranda Neville in person as well as spoken with her on Twitter. While I felt her first book, Never Resist Temptation, was good but flawed, by the time I'd read that, I'd already bought her second novel, The Wild Marquis, thanks to the beautiful cover as well as the plotline of a wronged rake hero from a puritanical family.

John Godfrey, now the Marquis of Chase (although he prefers to go by his nickname "Cain," after his courtesy title the Earl of Cainfield), is a Very Bad Man. At least, that's what society believes. His father, the previous Marquis, had such a towering reputation for piety and righteousness, that when he tossed his then-sixteen-year-old heir out of the house for "unspeakable acts of debauchery," it was tacitly assumed by everyone in the Ton that Cain was obviously a Pervert among Perverts. When the teenaged Cain found rescue and shelter at a brothel, it only confirmed society's suspicions.

Eight years later, Cain comes across a copy of the Burgundy Hours, an exceedingly rare devotional work that's been a (secret!) Godfrey family heirloom for centuries, at an estate auction for a recently deceased book collector. Cain is curious to know why his late father would have parted with the Hours - and he also believes that purchasing the Hours would go a long way towards dissolving his estrangement from his fanatically religious mother and sister.

However, Cain knows nothing about book collecting or auctions, so he seeks out a reputable bookseller who would be able to lend their expertise to his endeavour. He goes to a shop owned by J.C. Merton, who, to his surprise, turns out to be a woman.

Juliana Merton is herself interested in the upcoming auction - more specifically, she's seeking a collection of Shakespeares that used to belong to her grandfather, himself a fanatical bibliophile. However, ever since her husband's murder, business at her bookshop has been dismal and she can't afford them - not unless she takes on a wealthy client willing to offer a generous commission. Although she's initially disdainful of the frivolous and handsome Marquis of Chase, she can't afford to refuse him and she agrees to represent him in the auctions to ensure he gets the Burgundy Hours.


So on top of an original storyline examining a fascinating and yet rarely-explored aspect of Regency life, we have two thoroughly charming protagonists, vastly different in mindset and upbringing and yet united by the novel's central theme of family and identity.

Cain is a man whose public identity was more or less decided for him by his insane and tyrannical father when he threw him out of his house. He's spent the intervening years living up to (or at least playing into) high society's disgusted opinion of him, when in reality, he uses his black reputation to hide who he really is - a thoughtful, compassionate man with a deep regard and respect for women, especially fallen women and prostitutes. However, life is an exhausting and frustrating business when everyone is determined to think the worst of him, which is why he's drawn to Juliana, the bookseller who looks beyond his bad name and helps him regain some footing in civilized society - at least that part of society that worships books.

Juliana is a woman without a public identity - she had to find out for herself that her book-loving guardian was really her grandfather, and that her mother had died in childbirth, for all appearances unmarried. Her identity as a bastard keeps her from high society, her identity as a woman restricts her to the fringes of the book collector community, and her identity as a wife was taken from her when her husband was violently murdered on the way back from a book sale. With Cain, she finds a man who relies on and appreciates her hard-won skills, regardless of her gender or background, and from there she comes to love the identity she's created for herself with her intellect and her passion.

Honestly, these two people have their angsts but they're just so refreshingly open and rational about how secretive and irrational they sometimes get about their own hangups. If that makes sense. These are characters who are flawed and know they are flawed but refuse to dwell on their flaws. Their burgeoning relationship is honest and witty and blessedly free of many of the cliched tropes I would have expected from a rake and a bluestocking romance.

If you're looking for a story steeped in book culture with a rake hero sans misogyny, The Wild Marquis is the romance novel for you.
B+

You can purchase The Wild Marquis here.