For the last day of Book Expo, I started it out with breakfast with my blogger friends Ana and Katiebabs. The place Katiebabs had suggested wasn't open yet, so we stopped in at a bakery instead, where Ana enjoyed her first soft boiled egg! Poor Katiebabs was so excited about the cover reveal for the next J.R. Ward book, but she didn't have internet access!

After that, we all cabbed to the Javits Center and parted ways. I, myself, was unsure of what to do at the Javits. If things were quieter on Wednesday than on Tuesday, things were downright silent on Thursday, and there was really only one book I was interested in, so I contemplated just skipping out and going sightseeing. 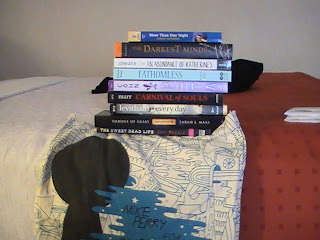 
I stayed until about 1:00 so that I could get David Levithan's Every Day, but also managed a few other finds - a Sarah Mayberry romance, Carnival of Souls, and Fathomless (which sounds like a really interesting and dark retelling of The Little Mermaid).

EDIT EDIT EDIT*** Ah! Mea culpa! There is more - I wrote this rather late at night and totally forgot - but there was a little more to my BEA tale. Due to pure luck and not actually knowing what was planned, I ran into a line of people at the Penguin booth in the afternoon who said they were waiting for John Green, so I got in line. As it turns out, John Green showed up to unveil the newest cover for An Abundance of Katherines, whose new design was chosen from a contest. The winner was there (she was from New Jersey, and it was also the day of her prom) and John Green handed out copies of the new edition, signed by himself. I proceeded to record the whole thing only to realize after he'd disappeared behind a curtain that I'd neglected to press the "Record" button. Ah well! END OF EDIT.

After that I went sightseeing - I decided to walk from my hotel all the way down Fifth Avenue and windowshop like no tomorrow. Didn't buy anything - not only because everything was astronomically expensive, but also because with all the books I'd grabbed I knew I had no room left in my luggage. But I took lots of pictures! 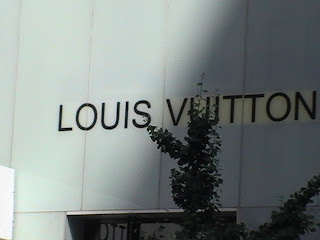 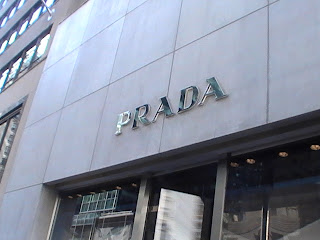 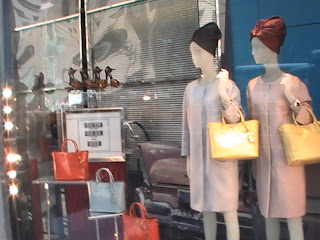 And after hoofin' it all the way down Fifth, I explored the glorious main branch of the New York Public Library. 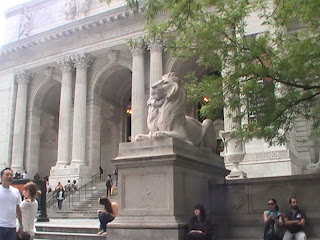 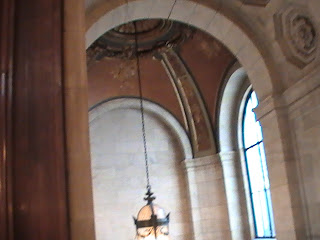 I limped back to the hotel after that, but not before getting rained on and finding out that one should never take the availability of a New York cab for granted. I flew out the next day, but not before exploring Central Park and discovering that Children's Day is the absolute worst day to visit Central Park's tiny, rather sad zoo.

And that was basically my Book Expo New York adventure! Would I go again? Um ... I'm not sure. Probably not, actually.

I mean, it was fun to get lots of free books - but I live near a library. I can get free books anytime I want. Honestly, I was looking for more of a social experience, the kind I got from going to writers' conventions like RWA National. I got a little of that from the BEA Book Blogger Con, but I was sick for half of that. BEA itself wasn't very social, in fact. It was a little isolating, particularly for a blogger. I think if I went as a publisher or a librarian or an author, I would be able to take something other than books away from the event, but as a blogger, I felt like a spectator.

But maybe I'll go looking for other conventions to go to. Ones that are closer to what I'm doing now (writing and blogging YA, romance, and fantasy), that aren't quite as expensive as RWA National, that have a great social element and opportunities for meeting new people.

For now, I'll go back to my regular job (vacation's over, sob!) and start E-mailing the people whose business cards I received!

How were your experiences at BEA?
Posted by AnimeJune at Sunday, June 10, 2012