"The Fault In Our Stars," by John Green 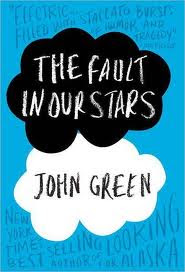 The Protagonist: Hazel Grace Lancaster. Suffering from terminal cancer, she's on a new miracle drug that can't cure her, but may offer a few more years. But what's the point of a few more years if death is still inevitable?
Her Angst: The new boy in her Support Group, Augustus Waters, seems to really, really like her. Like immediately. But does she really want to be a tragedy in another person's life?
The Secondary Characters:
Augustus "Gus" Waters: In remission from osteosarcoma. Lives with parents who like to embroider uplifting catchphrases on pillows. Determined to enjoy all the simpler pleasures of existence - like asking out a girl he's known less than a day.

Isaac: Augustus and Hazel's mutual friend from Support Group. Suffering from a rare eye cancer that will eventually blind him.

Hazel's Mum: Stays home to take care of Hazel. Finds every occasion she can to get her family out to celebrate - Bastille day, Hazel's half birthday, Arbor Day.

Hazel's Dad: Loving and supportive, but tends to cry a lot.

Peter Van Houten: The author of Hazel's absolute favourite book, An Imperial Affliction. Lives in Amsterdam. May or may not be a pretentious assclown.

Angst Checklist:
The Word: So can a heart be bruised right after already being horribly bruised? Well, not entirely.
I was still in recovery from when Lauren Myracle punched me in the heart when I picked up The Fault In Our Stars by John Green in preparation for my town's chapter of the FYA Bookclub (I'm a keener!). And perhaps that was why, while I enjoyed this novel immensely and did tear up and sniffle by the end, even emitting a rather embarrassing, sorrowful whine, I didn't actually go as far down the mourning spectrum as to actually sob while reviewing it, as I did with Shine.

But that, perhaps, is due to what makes both books so interesting. Shine, on the surface, has a "happy" (or at least, positive) ending that is nevertheless built on a story of tragedy and ends with a heavy loss for the main characters. Conversely, The Fault in Our Stars is a story with a sad (negative) ending that is built on a story of defiant, insightful joy, with the remaining characters emerging enriched and irrevocably changed for the better on the other side.

Hazel Lancaster has been living under the expectation of death for three years, ever since she was diagnosed with terminal thyroid cancer at the age of thirteen. Thanks to a miracle drug, she's been granted a delay, but not a cure. Death has moved out of the immediate here-and-now, but still lingers on the edges of the foreseeable future, leaving Hazel in a kind of listless stasis. Her biggest fear is becoming an emotional "grenade" - a ticking time bomb whose death will only hurt the people who know her. She figures the fewer people she involves in her life, the less pain she'll inflict on the world with her inevitable death.

At her mother's insistence, she attends a bleak Support Group in the basement of a church, and that's where she meets Augustus Waters, a sexy teenage boy in remission from osteosarcoma who believes the opposite of what Hazel does - that people are obligated to leave the world better (or at least different!) then how they entered it. His experience with cancer taught him not to waste time - that same day, he indicates his attraction to Hazel and invites her over to his house to watch a movie. Hazel opens up enough to share her favourite book with him, and they both puzzle over its ambiguous ending. What follows is a beautiful, clever, achingly sweet and heartbreaking romance.

It's interesting to read how two different characters move at such different speeds. Augustus is all over the place, moving at the speed of light, practically vibrating in place as he jumps from idea to idea. Hazel is more hesitant, more introspective. She's very quickly drawn in by Augustus' intelligent humour (so similar to her own, and incredibly funny to read), but still - she doesn't want to be a grenade. She already has to live with being an impending tragedy in her parents' lives (and her relationship with them is so amazingly depicted). And yet, she's swept away by Augustus' energy. And who wouldn't be?

Reading this book brought to mind the other "cancer book" I recently read, I'm Not Her by Janet Gurtler, a book that, while not a bad book, was just relentlessly sad and depressing - which only highlights how strong and inventive The Fault in Our Stars turned out to be for taking such distressing subject matter and building it into a story of such joy and wit, as well as anger, frustration, and grief. By running the full gamut of emotions (not just the PC ones of sadness, bravery in the face of pain, and bereavement), John Green separates the characters from their illnesses. They're not cancer kids (particularly not the Lurlene McDaniel-esque, faultlessly brave and martyr-y capital-C Cancer Kids), they're kids - who happen to have cancer.

The identities these characters have apart from their illnesses is such an important theme in this book - Augustus even points out how the tragedy of cancer is how many of those afflicted with it just retreat from their lives until everything about them is about cancer. Augustus and Hazel's relationship operates in defiance of that - their friendship and romance brings out Hazel's wit and personality and passion for literature. As much as I adore Augustus, Hazel's journey is really the heart and soul of this book as she learns to find and enjoy the "smaller infinities" within the reality of a limited lifespan.

And as for the writing - well. I laughed out loud several times during this book, and the style manages to be both accessible and challenging, but challenging in the good way. Challenging in the way that makes you want to go out and find out about philosophy and science and Swedish hip-hop, not the challenging that makes you feel like a dirty, dirty Philistine. "You must read this much (holds up hand) Kierkegaard to understand this book!"

While The Fault In Our Stars did not bulldoze my heart like Shine did, it it gave it a good, solid whack, while at the same re-igniting my curiosity and joy for the world and all its craziness.
A
Posted by AnimeJune at Friday, March 30, 2012