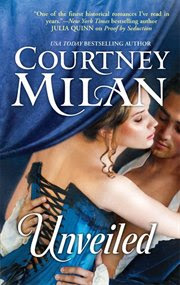 The Chick: Lady Anna Margaret Dalrymple, a.k.a. "Margaret Lowell." When her father is exposed as a bigamist by an opportunistic fifth cousin, she and her brothers lose their social status and their ability to inherit, leaving them penniless bastards.The Rub: This same fifth cousin seems to be the only one in the world who believes Margaret has personal value, independent of family or wealth.Dream Casting: Ginnifer Goodwin.

The Dude: Ye Shall Tread Down The Wicked, For They Shall Be Ashes Under the Soles Of Your Feet Turner - a.k.a. "Ash Turner." He finally gets the chance to exact vengeance upon the duke who abandoned his family to poverty when he discovers the peer's secret first marriage.
The Rub: His vengeance unexpectedly winds up hurting the one woman he's come to care for the most.Dream Casting: Rob James-Collier.

The Plot:
Ash: ALL YOUR DUKEDOM ARE BELONG TO ME.

Ash: Wow, you're hot. We should date.

Margaret: Wait, what? NO.

Ash: But I respect your mind!

Ash: But I'm secretly illiterate and all torn up and angsty over that fact!

Ash: But I'm still going to get the dukedom and condemn your brothers to a life of impoverished bastardy. They deserve it, you see, because they picked on my brothers in school and I would do anything to protect my brothers.

Margaret: But that's what I'M doing!

Ash: Yes but MY brothers get sequels. So as you can clearly see, my problems are more important than yours. Let's get married!

Richard: BTW, Margaret, we're only filing for our own legitimacy, not yours, because otherwise we'd lose everything!

Margaret: ... but you still have to be nice to my brothers.

1 Bout of Sex in a Closet

The Word: The book starts shortly after the hero utterly ruins the heroine's life - and ends up redeeming it, in the process.

The hero, Ash Turner, blames the death of his sister and his brothers' poverty and sufferings on the selfishness of the Duke of Parford and his weak, spoiled sons. When he discovers the Duke secretly married his mistress as a young man years before publicly marrying his current one, Ash gains a twofold vengeance when he exposes the Duke's bigamy to the ecclesiastical courts - it renders the Duke's despised sons illegitimate and unable to inherit, and it leaves Ash (the closest legitimate relative) as the legal heir.

However, the Duke of Parford also has a daughter, Lady Anna Margaret. Thanks to Ash's exposure of her father's first marriage, she was stripped of her title, outcast from society, and abandoned by all her friends. Because of that, Margaret is determined to do whatever she can to help her brothers' quest to convince Parliament to restore their legitimacy. When Ash travels to the Duke's country estate, Margaret stays on in the guise of a nurse to the ailing Duke - partly to protect her father from any attempt on Ash's part to inherit sooner, and partly to spy and gather intel she can pass on to her brothers, to convince Parliament that Mr. Turner is an unfit addition to the House of Lords.

Her plans go awry when Ash spots her and is instantly attracted. An intelligent, intuitive businessman who made a fortune in India, Ash has learned to trust his instincts above anything else. He sees Margaret and immediately intuits that she is a woman of substance, and starts treating her as such as he tries to seduce her.

Ash's method of seduction is clever as well as sweet. There is a twisty, reversed aristocrat-commoner vibe between the two of them. Margaret is accustomed to the life of a peer, and has been raised to believe that names, wealth, and titles are emblematic of one's worth as a person - so she is very disturbed when Ash continues to pursue her and find value in her despite the fact that he knows nothing of her name, family, or history. Because of that, she discovers her own strengths and talents only after losing everything she initially thought was important about herself.

Ash is an equally interesting character. Thanks to a learning disability, he relies on his personality, confidence, and quick wit to conduct business, but at the same time he is taunted by his shortcomings, torn by the belief that his proud, brash face is all he is capable of offering to the world. This increasingly comes into play when he interacts with his university-educated brothers - he paid for their educations in order to make up for the privations they endured as children, but as a result, he feels isolated and inferior around them.

Honestly, the only real problem I had with this novel was the continuation of the revenge plot. As I've stated before in other articles, there is a thin line to walk when writing a vengeful hero or heroine. I mean, most romance novels ultimately tell us that Revenge is Wrong and we should just Forgive and Love Everybody, but it all boils down to how far the hero takes it and why he's pursuing this revenge in the first place. Ultimately, I didn't buy it with Ash:
Yes. I had a LOT of problems with how the revenge plot got dragged out to the very bitter end, but otherwise, this was a thoughtful and beautifully written novel. I loved the author's inversion of the master-servant, aristocrat-commoner trope. I enjoyed her ambiguous characterization (particularly Margaret's family - who aren't the good guys in any real shape or form but they're not evil, either). I particularly loved Ash's intellectual seduction of Margaret - I'm growing increasingly tired of novels where the hero's seduction amounts to little more than the hero sexually harassing the heroine despite her protests until she inevitably gives in, but Ash courts Margaret on an emotional and mental level that was very chivalrous and incredibly sexy.
B+
Posted by AnimeJune at Saturday, March 03, 2012