"Silent in the Grave," by Deanna Raybourn 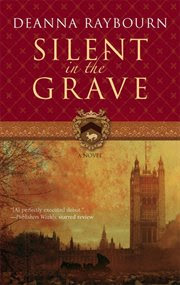 The Corpse: Sir Edward Grey. Nice-looking. Pleasant at parties. Suffered from heart condition. Terrible head for wine - and for poisons.

The Word: "To say that I met Nicholas Brisbane over my husband's dead body is not entirely accurate. Edward, it should be noted, was still twitching upon the floor."

There's not much you can do wrong with opening lines like that. With a story set in 1886 London, Lady Julia Grey's husband, Sir Edward Grey, casts off his mortal coil after collapsing during a party. When private investigator Nicholas Brisbane informs Julia that her husband was in fear for his life and was likely murdered, she angrily dismisses his scandalous accusations. Her husband had no enemies, suffered from a debilitating heart condition since childhood, and his closest family doctor declared his death a natural one.

However, a year later, as Julia is on the cusp of coming out of mourning, she discovers an insidious death threat hidden amongst Edward's things and realizes Mr. Brisbane may have been right. She swiftly seeks to enlist his services, even though the odds of success, a year after the crime took place, are minimal. However, Julia soon learns that sleuthing can be a nasty job, everyone's got a dark secret, and that there is more to the mysterious Mr. Brisbane than meets the eye.

Lady Julia Grey is an engaging heroine. While she's very much a person of her time, and while extremely naive (at least at the start), she's open-minded and intelligent. I enjoyed that this novel was as much about Julia's journey of self-discovery as it was about who murdered her husband, if not more. A self-proclaimed "disappointingly ordinary" member of a prolific family renowned for its mad hatters, Julia's investigation helps her emerge completely from the gray life she led in the strained relationship of her marriage, and also leads her to discover her own propensity to deviate from convention.

Inferior authors would have taken the "eccentric large family" plot device and applied it to the narrative with all the discretion and grace of a shovel of hot manure, but Raybourn deftly weaves the Marches (Julia's family) into the background, to serve as an implicit indicator of Julia's background and behaviour rather than as cheap comic relief or sequel bait.

So what were the dislikes? Well, the pacing. The writing is very descriptive, lovingly so, and in Lady Julia's refreshingly witty and honest point of view. However, probably due to the historical setting, there is a lot of descriptio, and because of that, the investigation tends to move at a snail's pace. The writing style and Julia's observations are often interesting enough that I don't mind it.

However, there are a couple of times when this was just plain frustrating and I wanted Raybourn to get to the point. For instance, there's a scene where Julia and her brother race towards a Gypsy camp in London to intercept a dogged Nicholas Brisbane, a situation in which speed is of the utmost importance, lives are on the line, etc., only now Julia wants to slow down and enjoy the view and describe the children and the music and the smells and how interesting everything is. But lives are on the line. But we get to see Gypsies peddle horseflesh!

Other than that, however, Silent in the Grave is an excellent mystery with well-drawn characters, a marvellous historical setting, real humour and wit, and of course - a mysterious romantic hero in the figure of Mr. Brisbane to drum up enough sexual tension to fuel many more books (Silent in the Sanctuary is next).
B+
Posted by AnimeJune at Wednesday, March 28, 2012

Labels: B Plus Reviews, historical, mystery