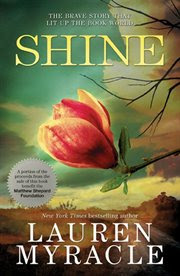 The Protagonist: 16-year-old Cat. When a dear friend of hers is brutally gay-bashed into a coma, she decides it's time to come out of her self-imposed exile and try to find out who's responsible.
Her Angst: Due to her own issues, she hasn't spoken to a lot of her classmates or former friends in years, and many of them now have dark secrets they don't want to share.

Secondary Cast:
Patrick Truman: Cat's childhood friend who now lies in a coma after a horrific assault. Fell in with the Redneck Posse after he and Cat drifted apart.

Christian: Cat's older brother, whom she's barely been able to speak to since he betrayed her when he needed her most.

Tommy Lawson: The town rich boy, and the leader of the Redneck Posse. A giant homophobic tool, and responsible for the pain Cat's had to hide for years.

Beef: A member of the Redneck Posse who stood up for Patrick. His future is still a giant question mark ever since a blown knee robbed him of a wrestling scholarship.

Aunt Tildy: Christian and Cat's surrogate mother ever since their own mother died and their father dedicated himself to the bottle. Rigid and responsible but unwilling to rock the boat.

Robert: Bailee-Ann's 11-year-old brother, who suffers from Fetal Alcohol Syndrome. This makes him hyper and talkative - especially about other people's secrets.

Angst Checklist (New feature for YA Reviews):
The Word: A young gay teen is beaten, strung up to a gasoline pump, with the nozzle jammed down his throat. The words, "Suck this, faggot" are scrawled on his chest. His name is Patrick Truman, and the members of his small, backwoods North Carolina town of Black Creek are shocked, of course. So terrible. What a tragedy. But the sheriff seems convinced the now-comatose Patrick was attacked by a rowdy group of out-of-towners and doesn't feel the need to investigate further.

Due to her own trauma, our heroine, Cat, let her close friendship with Patrick fall by the wayside years ago, but this tragedy spurs her to find out who's really responsible for this hate crime. To do that, however, she will have to come out of her shell, make peace with her ghosts, and confront the friends, family members, and enemies she left behind when she retreated from the world due to her own pain.

This book was - how can I be objective? A miracle. A masterpiece. It got under my skin and dug tunnels into my heart, flooding me with empathy for everyone in this book. Readers, I read this book in 24 hours. I started it at 5:50 in the morning before I had to get up - I almost called in sick to work. I sneaked peeks while I was on the phone. I counted the seconds to every coffee break. Read it at stoplights. I fell asleep reading it (thankfully didn't lose my page!) and I finished it at 6:00 am the following day.

It's not only a mystery. It's a coming of age novel. A healing novel. Cat is forced back into the world to find justice for her friend, even though it's not the easiest transition. As you can guess, Black Creek is not a squeaky-clean wholesome-livin' small town full of kooky characters (and I'm so guilty of loving that trope, you have no idea). It's a backwoods, narrow-minded community rife with poverty, drop outs, and drugs. Cat's investigations drag her through filth and hope, as she uncovers the secrets in the lives of her friends, family, and peers, all of whom are fighting for a piece of sunlight, just enough to see them out of the darkness of their lives.

I loved the heroine. I loved how she dug her way out of her own pain and saved herself while saving Patrick. I loved that she was naive, and frightened, and emotional, but willing to ask the hard questions and learn the difficult answers anyway. I loved that she doesn't just come out, solve the crime, and retreat back to her world of books - during her investigations, she works to rebuild a lot of burnt bridges, even if it means accepting the flaws in other people.

If I had to pick one thing that didn't quite fit (at least at first), it would have to be the character of Jason, who ends up being a love interest for Cat. At first it felt odd - because the central story doesn't really require Cat to have a love interest and it felt tacked on, like she had to have one because it's a YA novel. But even this aspect is eventually explored, and by the end of the novel made perfect sense.

I put this book down with an ache. An ache for the characters - for Cat and, perhaps especially, for the antagonist. I won't spoil anything, but I cried for this character, quite literally, which is a rarity for me. It doesn't mean I haven't been moved, emotionally, by books (I wouldn't read, otherwise), but it's very rare for it to affect me so emotionally that I have a physical reaction to it. I believe I've only physically cried over four books - I Love You Forever by Robert Munsch, Bridge to Terabithia by Katherine Paterson, Otherworld: Mountain of Black Glass by Tad Williams, and this book.

I put this book down with an ache for a beautiful novel, now finished, knowing I would have read something else, something that would inevitably be different. But one joy remained - the opportunity to write a review of this profound, emotional, heartbreaking, time-devouring novel, and get you all to read it.
A+
Posted by AnimeJune at Saturday, March 24, 2012

Labels: A Plus Reviews, contemporary, i cried, YA