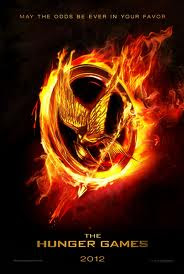 Well, I saw The Hunger Games - in a full theatre, popcorn and pop, the whole nine yards. To review it, however, I feel like I have to review each aspect of the film individually, because even 12 hours later, it's still hard for me to examine the film as an artistic creation independent from the novel itself. When you watch a film that's based on a book you've read and enjoyed, you're not exploring, you're waiting - for that one scene, and then the scene after that, and then for that special character's appearance. I watched this movie differently because I'd read the book and remembered it so well. WARNING: FILM AND BOOK SPOILERS AHEAD.

The Adaptation:
Honestly? Full marks. In terms of overall accuracy to the source material and conveying it in an understandable way, the film did an excellent job. What pieces were cut from the film, like Madge's character or Peeta's prosthetic leg, made sense and didn't detract or distract from overall story (honestly, Madge never had a huge impact on the series, and Peeta's fake leg is much like Luke Skywalker's fake hand - mentioned once and then never again). What scenes were added contributed to the story and to its place as first in a series (more on that later). A.

The Katniss:
Also very good, which surprised me, since Jennifer Lawrence was easily the weakest link in the acting chain in X-Men: Gay Mutants In Love. Lawrence underacts and plays it close to the vest, which is in keeping with Katniss' character. Katniss isn't a screamer or a maker of speeches - she's private, she's introverted, and she's focused. Jennifer Lawrence embodied her perfectly. A

The Peeta:
I'm sorry, Josh Hutcherson, but you are really, really silly. He's not a terrible actor, and Hutcherson does a decent job when he's playing it up for the Capitol audience, but his serious acting just can't compete. It's not even about how he overacts, but more like the tone he sets with his character is off. He acts like someone in a far less perilous situation - like a person who wants to win the Boston Marathon, whatever it takes, not someone who's fighting to the death with a bunch of other kids. The audience actually erupted into unintentional laughter at the scene where Katniss finds him all painted up at the stream. C

The Gale:
He's pretty and not annoying, which is all that was asked of him for this movie, really. A

The Supporting Cast:
A mixed bunch, to be honest. Haymitch was decent but not outstanding. Elizabeth Banks channeled Bette Midler from Hocus Pocus for most of the movie as Effie Trinket. Lenny Kravitz was excellent as Cinna - but his portrayal also raised a lot of questions about Cinna's character and his motivations, and why he works for the Hunger Games if he clearly doesn't support them.

Every other kid in the Hunger Games (especially the Careers) was terrible. I mean, just awful. Similar to Peeta, they didn't set the right tone. There's a scene where the Careers are chasing Katniss, and the way they acted wasn't menacing at all. It felt like they were going to corner her and tease her about her jacket and throw beer cans at her like a bunch of hicks. They were acting like bullies when they should have been acting like predators. When they murder the tribute who starts a fire (off-screen, of course), afterward, they're giggling and snarking like they TP'd her house. With a film already hampered by a PG-13 rating, it was up to them to pick up the slack and inject some legitimate menace and suspense into the film, and they failed royally. C-

The Love Triangle:
One of my favourite aspects of the novel was the ambiguity surrounding Peeta and Katniss' relationship. We think Peeta is faking his love for Katniss for audience support, so Katniss goes along with it, maybe starting to feel the real thing, if only a little. The big discovery at the end of the novel is that Peeta's feelings for Katniss are actually real, and his heart is broken when he realizes that Katniss is still very much ambivalent. Granted, the subtlety of their relationship would be tough to translate onto the big screen, but the film still failed on that score, and I think it failed especially with the viewers who haven't read the books, because at least we know what they're trying to do.

Firstly - the whole background between Katniss and Peeta with the burned bread was really clumsily filmed. In a recurring flashback, it's raining, Peeta sees a sad Katniss lying against a tree and throws a loaf of bread at her. It lands in a puddle. She never picks it up. Discussing this past in the cave, she never mentions her family's starvation or how important that bread was to her, just that Peeta gave it to her. While the books' readers would understand, I think the new viewers would just be puzzled as to why this was such a big deal.

Secondly, while the film tries to imply that Katniss is fabricating feelings for Peeta, it's not followed up on, and there's no scene at the end where it's established her feelings for Peeta are not exactly on the level. I understand to some extent that that is a subtlety that just can't be easily filmed, and it looks like they're jettisoning that whole ambiguity and going for the full I-Love-Two-Guys thing that only slowly developed in the books. But while I may understand it, I don't like it. C.

The Extra Stuff:
By extra stuff, I mainly mean, the introduction of other points of view. While books can have a first person POV, movies are pretty much entirely 3rd person, with a few incredibly rare, artsy exceptions. With The Hunger Games I loved it - it still followed the story, but it gave us something new to look at and think about. My biggest frustration with the Hunger Games trilogy is how, with Katniss' limited POV, we end up missing a lot of the important rebel actions, but here we get a taste of it, in five important ways:
Overall, these scenes were an A.

The Violence:
Of course, the hardest aspect of this adaption is doubtless the violence. It is a story about teenagers killing each other - but it is also a story written for and aimed at teens. Recently, outrage erupted over the MPAA's decision to give the anti-bullying documentary Bully an R-rating for profanity - thereby barring the film from the very audience (school-age adolescents) it had been expressly intended for.

So I get the PG-13 rating for The Hunger Games - it would hardly be fair to adapt a film from a book beloved by teens and make them unable to see it without their parents. However, let's just say I'm really glad the MPAA has never had anything to do with books.

In this case director Gary Ross uses the tried-and-true Walt Disney method for gruesomely dispatching villains in a family-friendly way: imply, imply, imply. During the scenes of the most intense violence (the initial scene at the Cornucopia) he uses lightning-quick flash-cuts and a jittering camera to give us a sense of violence without showing it. We see weapons slash down, we see the resulting corpses and splashes of corn-syrup blood, but we don't see any of the blows or weapons connect with an actual person.

For the most part, it works. The Cornucopia scene was based on mad chaos and mob mentality in the novel, and the swift, jagged editing of the film's scene gives us that tone while disguising the gore at the same time. The three most disturbing deaths in the actual movie are:
These choices in deaths are interesting because - in both the novel and film - these deaths aren't just gory, they're important. Glimmer is the first person to actually die as a result of Katniss' actions. Rue is the most tragic death, the death of an innocent. Random Tribute's death very clearly established Cato's character and bloodthirstiness as Katniss' most immediate antagonist. The fact that these deaths got special attention definitely shows an understanding of the source material.

With one noticeable and disappointing exception: Cato's death (which is one of the most disturbing in the novel) is reduced to a pale rip-off of Scar's demise from The Lion King. I get that they couldn't show him getting slowly eaten over a nine-hour period, but his death is meant to have an impact, and they could have found a better way to imply that then with the very quick and superficial death scene he does receive. He also gets an out-of-character moment of self-awareness before his death that didn't ring true and seemed manipulative. B+

Overall? I had a good time. I don't think it was my favourite movie of all time, but it was interesting and it did the novel justice. Even now, I still can't pin down how it works as an independent movie, so I don't think I can review it just as a film. What do you guys think? Comments are open!
Posted by AnimeJune at Saturday, March 24, 2012