"On the Way to the Wedding," by Julia Quinn 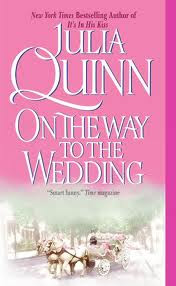 The Chick: Lady Lucinda Abernathy. The plainer friend of the beautiful, accomplished Hermione Watson, Lucy's used to being overlooked, so she has no problem helping Gregory Bridgerton win Hermione's hand away from an unsuitable paramour.
The Rub: Lucy has no problem, that is, until she starts to fall in love with Gregory in the process.
Dream Casting: Laura Carmichael.

The Dude: Gregory Bridgerton. He's always known that he'll be able to identify his One True Love on sight - and he does! It's Hermione Watson!
The Rub: But what's a man to do when his One True Love doesn't return his feelings? Get help from her BFF - her surprisingly witty, kind, graceful, lovely BFF...
Dream Casting: Charlie Cox.

Gregory: A DREAM IS A WISH YOUR HEART MAKES.

Hermione: Cool. I'mma go talk to anyone else as far away from you as I can get.

Lucy: Easy, tiger. Let me give you a few tips.

Hermione: Hey, guess what! I just got compromised by Lucy's brother so now I'm heading offstage since I've rendered myself irrelevant to the storyline! Byyyyyeeeee!

Gregory: ARE YOU FREAKING KIDDING ME? I suddenly want to make out with a random person in a jealous rage!

Lucy: BTW I'm secretly in love with you. But I'm ten minutes late for my evil-uncle-arranged marriage to my future gay husband! Ta, darling!

Gregory: Wow, now I'm secretly in love with you. Back off, evil uncle and future gay husband!

1 Use of Bondage (non-sexy variety)

1 Raging Annoyance of a Little Sister (GO AWAY, HYACINTH)

1 Love of Bacon
The Word: Before we move on to the body of the review, let's have a little Bridgerton Recap:

Book 2: "I Like My Women the Way I Like My Father - COVERED IN BEES!"
Bridgerton: Anthony
Grade: A-
Pros: Excellent use of themes, better use of story structure. Cons: Beautiful heroine who refuses to believe she is beautiful - a turn-off for me.

Book 5: How To Terrify Your Family, Seduce a Man and Tame His Demon-Spawn Children, All In Three Easy Steps.
Bridgerton: Eloise
Grade: B-
Pros: Interesting hero and hero issues, relateable (somewhat) heroine. Cons: While relateable, heroine is still ANNOYING beyond all reason. Also: demon-spawn children.

Book 7: Don't Read this One, or, How a Crazy Manic Pixie Dream Girl Gets Everything She Wants While Everyone Works Around her Crazy.
Bridgerton: Hyacinth
Grade: C-
Pros: It's written in grammatically-correct English. Cons: You'll want to set the heroine on fire.

So On The Way To the Wedding already begins on a high note for the simple fact that it's not Hyacinth's book (although *sigh* she does make a number of ill-advised appearances). As well, Hyacinth's book and the comments of my friendly Tweeples lowered my expectations to such an ebb that I was actually pleasantly surprised by this novel. While it's still not Julia Quinn's best (that remains An Offer from a Gentleman) it is a far lovelier tale than Hyacinth's hot mess of a tale.

Gregory, the youngest Bridgerton son, has always believed in true love - how could he not? Lightning already struck 7 times in his family, so it's reasonable to assume it could happen an 8th time. He's convinced that he'll immediately know The One on sight, and until that time he's content to live a privileged, irresponsible, rootless existence eating sandwiches at his siblings' fancy parties.

It is at one such house party that he meets The One: Hermione Watson, the darling of the ton. However, despite Gregory's determined advances, Hermione - gasp! - doesn't appear to share his feelings. However, he gains an ally in Hermione's (slightly plainer) BFF Lucy Abernathy. Lucy is a veteran observer of the various types of "true love" crushed by Hermione's innocent indifference. Having recently discovered Hermione's inappropriate fondness for her father's secretary, Lucy is now quite invested in herding Hermione's heart towards a more socially-equal subject, and she agrees to help Gregory win Hermione's hand in marriage.

Of course, nothing does go according to plan in a Julia Quinn novel. Thankfully, Quinn saves the histrionic drama for the third act and builds the first and second on the layered, believable protagonists and their (thankfully!) angstless blossoming romance. Lucy is a wonderful heroine. Rational, ordered and pragmatic (perhaps a little too much for her own good), her romantic and sexual awakening is sweet and realistic. Despite her growing love for Gregory, she needs to build and develop her own needs and desires and priorities before she's able to reach out and take a risk.

Gregory's character is more subtle. He was never really much of a presence in the earlier books - he was usually a child or away at Eton. In fact, both he and Francesca feel like the Odd Bridgertons Out, simply because so many of their siblings (including *sigh* Hyacinth) make a point of popping in and out of each other's books, whereas they do not - Francesca, in fact, is never referenced again after her own book. But Gregory actually feels like the Odd Bridgerton - born ten years after the youngest of his brothers, he never had the close brofest Anthony, Benedict, and Colin had. And his upbringing (realistic for 19th century England) kept him from wholly connecting with his sisters as well.

While his character, as a whole, left less of an impact on me than Lucy, the motivations for his personality and lifestyle are sound, believable, and surprisingly undramatic - and I always appreciate well-adjusted characters whose foibles are simply theirs, and not a result of a traumatic accident or shady past.

That being said, the third act does veer a little into Crazytown, but on the whole, it's a pleasant drive to Crazytown. The pressure (however silly and far-fetched the dramatic "twist" is) puts the character development both Gregory and Lucy have undergone to excellent use and their reactions to their predicament are entertaining and romantic (for the most part - Gregory loses points for a stunt involving hand restraints and a toilet).

On the whole, however, On the Way to the Wedding is a surprisingly quiet note to end an eight-book series on. Unlike most other romance series, Julia Quinn did not save the last book for the angstiest, darkest, or most mysterious character. She doesn't reveal any shocking revelations about the Bridgerton family. In fact, most of the Bridgertons keep their happily-wedded noses out of this story (barring the occasional throwaway reference) a fact for which I am very grateful. I'm not sure exactly why, except for his age, Gregory was left for last. Either way, it was a perfectly pleasant novel, and a nice addition to an overall entertaining series.
B+
Posted by AnimeJune at Monday, March 12, 2012