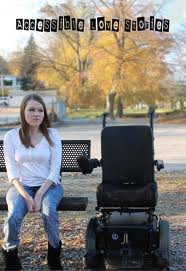 There's a popular cliche out there that says, "Put your best foot forward."

Okay, so maybe that's not the best metaphor to use about an anthology of love stories with wheelchair-bound protagonists.

What I mean is, is that first story in an anthology is a crucial one. It's supposed to set the tone of the collection, it's the face of the anthology, and it's what's meant to draw the reader in to read the other five stories of people who "have already been swept off their feet by disability" and encourage us to "join them as they release the brakes on love" (from the back cover blurb).

Honestly, many of these aren't romance stories so much as stories where love eventually occurs in the narrative (and in one story, it doesn't even do that) - because of that, I've chosen to eschew my typical romance-reviewing format.

But what we need to ask is, does this first story present the anthology's best, brightest face?

"Bad Hotel Art," by Christy Leigh Stewart
In a word (screamed at the top of my lungs from the highest building in my hometown until my voice is hoarse): NO.

This story nearly sent me off the deep end by opening the collection with a tale that is, hands down, literally one of the worst things I have ever read in the more than two decades I've been capable of reading. There aren't enough Fs in the world to convey how terrible this story is. It's not even that it's terrible from a story perspective (although it is), or that its characters are heinous caricatures (which they are).

No - this story fails because it represents a complete lack of competency with the English language and how to use it properly. I am appalled at the horrendous number of glaring errors and syntactically-garbled gibberish that made it past the editor.

Our heroine, Ophelia, is an eternally-patient personal assistant to a foul-mouthed, relentlessly offensive Random Rich Dude named Abbott Hall, who's trying to op en an art gallery. To give you an indication of the quality of writing to come, the story begins while Ophelia is trying to hold a phone conversation with Abbott over the sound of a woman making a violent, apparently acidic bowel movement in an adjacent bathroom stall.

Ophelia feels eternally victimized by the world for being in a wheelchair, most especially by her cartoonishly awful mother who allows people to confuse spinal injury with autism. The only place she feels strong is at work, and that's because she and Abbott conduct all their business by phone, leaving him unaware of her disability. All that ends when Abbott flies down to see her in person because he's in a doozy of a situation - his Dead-By-Plot-Device-Grandfather altered his will to leave everything in his company to Abbott's drug-addicted uncle if Abbott doesn't marry within a year of Granddad's death. And who better to have a married-in-name-only arrangement with than his slavishly loyal personal assistant whom he's never seen?

Ophelia is a thinly-veiled slab of cardboard - completely empty of nuance or real personality until the plot demands a response of righteous indignation. Abbott acts like a 14-year-old boy - his snap judgements, immature behaviour and constant flow of swear words and offensive terms make him seem like a child trying to act like a grown-up rather than an actual adult.

[Abbott] "I'm marrying her, not fucking her."

"It doesn't really matter, I guess," Reznik ignored him. [AnimeJune's note: by the way, "ignored" is not a valid speech tag] "It's not like she's the dude; even if she doesn't feel anything you can still have sex. What kind of sex life would that be though? She could suck you off and shit but I doubt she will. If you can't even get her off I doubt she'd go for it."

"Act offended, dude, but you can't say you aren't thinking it."

Abbott wished he could truthfully deny it. - page 15

As well, the writing is just abysmally bad - misspelled words, misused words, and typos abound. Points of view jump around from scene to scene.  And let's not forget labyrinthine phrases like:


The idea that there could be [mothers] unlike his own [mother] always perplexed him a little; the idea that he was the same species as someone who's [sic] life had been first held in different arms and first hopes and dreams, and pride had been crushed by someone else's painful words and eyes. - page 18

What the fuck does that even mean? How about:

Also, is that a misplaced comma in that exclamation or are there some minor deities in the house? Or:


Anger can only stayed dormant for so long. - page 27

All your angst are belong to us? And finally:


She shivered. The subject of death or had he chilled her with the cold of his body. - Page 30

Having this anthology open with such wretched garbage seems a terrible choice - I almost put this book down, and would have if not for a) the fact that this was a review request and b) my masochistic curiosity.
My Grade: F Minus Times a MILLION

"Meet Cute," by D.C. Graham
This story starts off much better, but honestly, the nutritional information on a can of Whiskas cat food would read like Shakespeare after the steaming bucket of fail that is "Bad Hotel Art."

To D.C. Graham's credit, this story is written in perfectly serviceable English, and is about an adorable, virginal paraplegic named Daniel who falls in love with Patrick, the new partner in his doctor's practice. While Daniel is nervous about entering into a relationship because of his disability and his sexual inexperience, such hurdles are quickly overcome by Patrick, who is a loving and compassionate gentleman.

Nothing in this story is offensive or terrible - but nothing is really interesting, either. Much of Patrick and Daniel's budding romance is told instead of shown, and Patrick is honestly Too Good To Be True for there to be much conflict. The two points of this story that stick out are a) the fact that this is the only story in the anthology that actually depicts a sex scene and b) a throw-away comment about Daniel's sexual experiences with a bowl of mashed potatoes.

Yes, this story is rather bland and sweet - but that's usually just the sort of food one recommends to settle one's stomach after eating food-poisoning-inducing sewage, isn't it?
My Grade: C+

"To Stop Now," by Jess Gulbranson
This story is an inexplicably pointless, unromantic and unpleasant short story about a guitar player who was recently paralyzed and likes to play angsty music and passive-aggressively slutshame his girlfriend to get over it. Given that this is supposed to be an anthology about wheelchair-users who find love, but this jerkwad doesn't find love and barely mentions his wheelchair, I'm baffled as to this tale's inclusion.
My Grade: D

"Fire on Babylon," by Amanda Dier
This was a nice and well-written (if slow-moving) tale about a waitress named Susan who finds herself falling in love with her brother's embittered, recently-wheelchair-bound best friend Lisa. Lisa is unsure of both her own attractiveness as a disabled person and Susan's apparent switch in sexuality, but decides to give it a shot. The story takes on an episodic structure as they weather the numerous tragedies and events that befall them, with a sweet little ending. While the brevity of the medium requires some telling over showing, Dier managed to get me invested in both characters.
My Grade: B

"Why Not?" by Esther Day
While "Fire On Babylon" was okay, "Why Not" edges past it as best story of the bunch. This sweet tale of friendship that turns into more starts when Seth, a hard-working and self-sufficient man paralyzed from birth, is forced to ask his good-natured neighbour Reed for help when he unexpectedly becomes the guardian of his 3-year-old nephew Luke - not knowing that Reed has been insanely in love with him for months.

I liked seeing how Seth, a disabled person who was perfectly capable of taking care of himself, has trouble asking for and accepting help - even when the most-abled person would find themselves out of their depth with a new baby. Reed practically falls over himself to help out Seth and Luke,  even as he worries what will happen when Seth gains his footing (so to speak) and no longer needs his assistance.

Was this story perfect? Nope - the Surprise! Orphaned Nephew is a complete contrivance - a plot moppet (copyright Smart Bitches) who's the product of a sister Seth never even knew existed, and her mysterious not-existing-until-the-plot-demanded-her-baby is never explained. She must have sprung fully-formed, pregnant and already tragically dead from the head of Zeus. As well, Seth's attraction to Reed is told instead of shown and only at the very end, and there is no indication of his sexual orientation one way or the other until then. I get the impression the author was trying to leave Seth's true feelings for Reed as a question mark until the end, but dude. This is a romance story. We all know how it's supposed to work out. For the majority of the story, his appreciation is entirely platonic, so his sudden "well, I'd always kind of felt that way for Reed" admission at the end seemed tacked on. Otherwise, it's a strong story.
My Grade: B

"On Saturday Afternoon," by Ruth Madison
Ending this anthology on a surprisingly good note is this intriguing story about Em, a pathologically shy hospital intern who falls for a disabled speech therapist named James. James is easily the loveliest hero in the entire anthology - and, interestingly, the one with the most severe disability (he has no leg mobility and very limited upper mobility). James can see through Em to her truly kind spirit and YOWZA - despite the fact that Madison doesn't actually depict any sex, the tension and the implications of what they do alone are realistic enough and yet also sexy enough to convey how well they work together despite James' limitations.

However, Em kind of ruins the story by being such a doormat she can't even refuse her smarmy prick of a boyfriend's smarmy proposal even after she and James have had sex (she actually begs him for a week to think about it!) and she ends up screwing both guys over. As well, the ending was kind of lacklustre.
My Grade: B-

You can imagine my surprise, dear readers. The majority of the stories in this anthology were decent - none of them were awe-inspiring but they were still interesting stories. But still - "Bad Hotel Art." Who let that one in - and who decided it should be first?

Honestly, that's part of why I'm ultimately giving this anthology a lower grade, because I have to review the whole as well as the sum of its parts. The anthology's theme is shaky (why was "To Stop Now" in there?) that first story was mind-bogglingly terrible, and the editing was just substandard. Even in the decent stories, I noted errors and typos that should have been caught before the book went to print.

Yes, there are a couple of good stories, and if you're interested enough in them for themselves, by all means get the collection. Ultimately though, as a story collection, Accessible Love Stories isn't worth your time.
C-
Posted by AnimeJune at Saturday, April 28, 2012