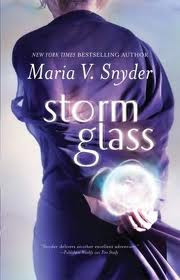 The Protagonist: Opal Cowan. Teased at magic school for being a One-Trick Wonder, when she's sent out on a special glass-making mission for a team of storm wizards, she discovers she may have a hidden talent after all.
Her Angst: But will she ever be able to overcome her own fear of losing the people she cares about, just like she lost her sister?

Zitora Cowan: A distant relative of Opal and the second most powerful magician in the land. Accompanies Opal on her mission to the Stormdancers.

Kade: Love Interest #1 - a cute, angsty Stormdancer. Unfortunately, he's still mourning the loss of his sister and is determined to never ever get close to anyone again. Ever. Good luck with that.

Ulrick: Love Interest #2 - a whiny, self-involved worrywart glassmaker who requires constant updates on Opal's whereabouts and doesn't like her wandering around alone. Yeah, you're not much of a catch, either.

Devlan: An evil, blue-eyed magician who wants to capture Opal and possess her power for himself. Despite their incredibly creepy history, Opal and Devlan share more chemistry than either Legitimate Love Interest.

Pazia: Super BitchFace Rival who must team up with Opal to track down a merchant selling fake diamonds.

Magical Angst Checklist:
The Word: I seem to be having a spate of bad luck. First, I picked up Tempted By His Kiss and was done in by its utter lack of originality. To replace it, I chose Storm Glass, a book I'd had signed at RWA 2009, and was subsequently bored out of my mind.

Must be something in the water.

To this book's credit, it does have a more or less original premise and actual stuff that happens, so I managed to make it to page 300 before skimming like mad to get to the end.

Opal Cowan is a glass maker and a student magician - however, she's known around her school as the One-Trick Wonder. She's only really able to put magic into the glass she makes, she's not actually capable of handling or controlling it herself. After four years of study, she hasn't made any progress, and she feels more than a little useless.

Until she's summoned by the Master Magicians for a special mission: the Stormdancer Clan is in trouble - their magicians protect the coastline from vicious weather and produce cheap energy sources for their factories at the same time by harnessing the power of thunderstorms into specially-made glass orbs. However, someone has been sabotaging the orbs and two Stormdancers have already died from using inferior glass. Opal's expertise in imbuing glass with magic might help the Stormdancers discover why their orbs aren't working and how to make better ones before the next storm hits. However, there are nefarious forces at work who don't want the Stormdancers to receive aid, and they're willing to go to any lengths to prevent Opal and her mentor Zitora from completing their mission.

Well, that's really only the first part of the mission, and one that leads Opal on an unfocused, angsty-heavy, and increasingly dull journey that, frustratingly, comes to rely very strongly on elements from a previous trilogy in which Opal was a character.

My first problem isn't completely the book's fault. While it's the first of a series, it's connected to a previous trilogy by the author (Poison Study, Magic Study, Fire Study) and a lot of the events from the past books are not only referenced but important to this book's storyline, so yes, I felt left out and it bothered me. If the aspects of the previous series were so important to this book, why wasn't it included in that series instead of hailed as the start of a new one?

However, that aspect would have only been an annoyance, not a deal breaker, if not for the fact that this book rapidly loses narrative steam about halfway in. The start of the novel is a solid piece of writing - we have a focused goal, a heroine with problems of self-esteem to overcome, and an Angsty Tortured Love Interest (Kade, a Stormdancer grieving for his lost sister). However, around the midway point, Opal's suddenly working on six different goals at once (saving the Stormdancers, not getting kidnapped, tracking down sellers of fake diamonds, not getting killed, investigating a possible coup in the Moon clan, starting up her own glass shop), she gets another love interest (the annoying, overprotective and whiny Ulrick) and she does it all in a really slow way.

The pacing is ridiculously slack. Opal's - and by that connection, the story's - focus is scattered and her actions are passive and reactive. More time is spent setting up and explaining the various storylines and developments with tedious expository dialogue and scenes (as well as Opal moping and whining about her Two Love Interests) than there is of Opal actively doing things - until the Bad Guys find her and attack. The book's basically comprised of long, slow expository periods broken up by short bursts of action and reaction.

With this many goals, despite liking the heroine, I wasn't able to get invested in any of the particular plots or subplots since I couldn't really tell which ones were the subplots and which plot was supposed to be the major one. I've never before encountered a novel that manages to have so much going on without anything really happening.

That being said, I liked the heroine. I understood her feelings of inadequacy and her low confidence - she's surrounded by powerful magicians with amazing talents, but she feels she only has one marginally useful skill. She sometimes feels the only reason she's permitted to study in the magical school at all is thanks to her connections to the influential heroine of Snyder's previous trilogy, and she believes she's scorned and looked down upon by the other students because of that. She's also still coming to terms with the truly gruesome death of her sister Tula (again, something that happened in previous books).

Sadly, one great character does not a good book make. Both of her Love Interests are kind of duds, and no one else really sticks out. The worldbuilding is only okay - it's solid, consistent and makes sense, but it's not too detailed and fails to draw me in to its world. I skimmed after page 300 - but I noticed the pattern of many pages of inaction followed by sudden action (and one incredibly dark, twisty turn that I'm not sure how I feel about) stayed the same. With some tighter editing and faster pacing, I might have really liked Storm Glass. As it is, it couldn't hold my attention.
C