"Not That Kind of Girl," by Siobhan Vivian 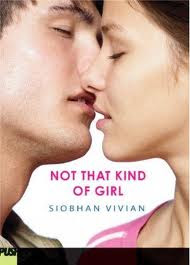 The Protagonist: Natalie Sterling. This year is her senior year, and she's determined to do the very best possible job by her school (as their ninth female student council president) and the girls she takes under her wing (her friends Autumn and Spencer).
Her Angst: Despite priding herself on being "the good girl" and "the smart girl," when her sanctimonious ways drive her best friend away, she starts making several less-than-good and -smart decisions.

The Secondary Cast:
Autumn: Natalie's best friend. Humiliated by a disgusting rumour in freshman year, Autumn was helped through the pain by Natalie, but now she wants more of a social life.

Spencer Biddle: A dance student who likes boys and what she can make them do. While she created the controversial "Rosstitutes" dance group, she's also involved with student council.

Connor Hughes: A shy, gentlemanly quarterback whose family owns a Christmas tree farm. Has a thing for Natalie.

Mike Domksi: Assclown of Epic Proportions. A jerky jock who likes to bully people who mess with him - particularly girls.

Ms. Bee: MOST PRETENTIOUSLY USELESS TEACHER EVER - a snobbish Professor Feminist who prefers sitting in judgment on female students to, uh, actually teaching them.

The Word: Imagine Tracy Flick from Election and Rachel Berry from Glee, and you'll have Natalie Spencer, the protagonist of Not That Kind of Girl. Natalie is a volunteering, extra-curricular-loving overachiever who's in the running to become the student council president of the exclusive Ross Academy prep school - only the ninth girl to do so. She's got too many important things to do to waste her time at frivolous parties or pointless get-togethers with flirty jocks like Connor Hughes, and as a result, she doesn't have a lot of friends - in fact, she only has one: Autumn.

Autumn's reputation was ruined in freshman year when her boyfriend spread a pernicious rumour about her when she refused to put out. Natalie alone stuck by her side, and now that they're seniors, she's determined to help Autumn have the best year possible. However, Autumn is growing distant, and wants to hang out with other people and go to social events - even if it means fraternizing with the same people who turned their backs on her in freshman year. What can Natalie do to prevent Autumn from repeating her old mistakes?

At the same time, a girl Natalie used to babysit named Spencer Biddle is now a freshman at Ross Academy, and starts the school year off with a bang when she organizes a group of girls into a scandalous cheer team known as the Rosstitutes. Natalie doesn't understand - Spencer is clearly intelligent, confident and motivated, so why does she allow herself to be exploited by flashing her underwear and leading boys on? Clearly, Natalie needs to take this girl under her wing, along with Autumn, and teach them both how to respect themselves.

If you haven't already guessed by now, Natalie's not exactly an open-minded person, and her wings are not as capable as she thinks they are. Spencer, despite Natalie's good intentions, knows exactly what she wants out of life and what she's doing. Meanwhile, Natalie's disdain for Autumn's other friends masks a deep-seated insecurity that Autumn will abandon her for the social crowd. When her self-righteous moralizing goes too far and Autumn does just that, a heartbroken Natalie seeks comfort in a clandestine affair with cute quarterback Connor Hughes, and discovers for herself the blurry lines that persist in real-life morality.

Many YA authors, when dealing with a book with a central moral theme, give their protagonists a few flaws but tend to keep them open-minded in order to maintain reader sympathy - the negative and bigoted points of view generally come from secondary and supporting characters. In a ballsy choice, however, the bigoted, narrow-minded, condescending point of view is Natalie's, and she's the voice of the entire book.

Characterization-wise, Natalie Sterling is fascinating. While she is relatable (at least to me and my personal experiences with highschool), she is not a very likeable character, even by the book's end when she has her eventual come-to-nonslutshaming-Jesus moment.

On top of being judgmental, controlling, and manipulative, she is incredibly self-centred. Of course, this is totally in keeping with her character - she's an ambitious, goal-oriented loner who's used to organizing her life according to her own needs, so when her relationships with others fall apart (Spencer, Autumn, Connor), her reaction is always, "But what about me? Don't you see how you're hurting me? Don't you see how this is ALL-CONSUMING AND IMPORTANT TO MY LIFE?"

At the same time, the author cleverly uses Natalie's flawed POV to demonstrate how the culture of slut-shaming, at least among girls, springs from social insecurities. While Natalie continually defends Autumn against the cruel rumour her freshman boyfriend started, she always refers to the incident as "Autumn's mistake" and an example of Autumn's lapse in judgement, instead of her boyfriend's mistake and lapse in judgement. Natalie subconsciously blames Autumn for the incident because she wants to believe in the idea of the "Good" girl, the "Smart" girl - the idea that girls who are smart and good (i.e., girls like Natalie) will never have to worry about being taken advantage of.

Meanwhile, most of the secondary characters are strong, well-developed personalities who provide alternative voices to Natalie's shallow "make good decisions!" mantra. Spencer, in particular, was a nice surprise - a promiscuous, reckless girl with frank ideas about sex who is (gasp!) also smart, confident, and considerate of others. Autumn is also an excellent character - you understand her friendship with Natalie even as we see how Natalie's jealousy restricts her life. Connor is a bit of a puzzle for most of the novel, and I get that he's supposed to be, but by the end of it I still couldn't totally understand what he saw in Natalie that let him put up with the many, MANY cringe-inducing things she said to him (and to Autumn, AND to Spencer).

That being said, is this a perfect novel? Not really. The language, while very occasionally sublime (a girl in a pleated skirt bending over in front of a boy is described as a "ringing church bell"), is generally a little simplistic for my tastes, and I felt some of the characters acted younger than they actually were. I felt the novel pulled a few punches at the end, particularly when Natalie's social downfall is told instead of shown, and ultimately seems to have no lasting consequences. Otherwise, though, Not That Kind of Girl is a strong novel with an intriguing, flawed, frustrating heroine.
B.
You can purchase "Not That Kind of Girl" here.